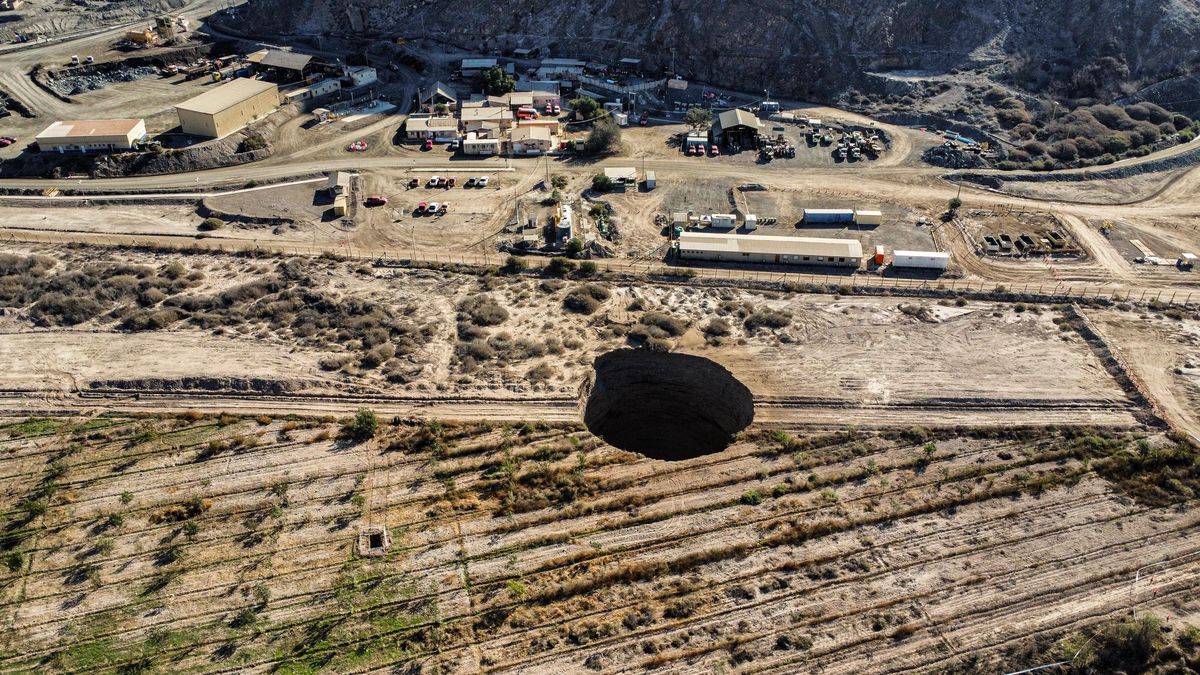 Gigantic crater: Why in some places – like now in Chile – the earth suddenly opens up

Huge craters: Why in some places – like now in Chile – the earth suddenly opens up

The earth opened up in Chile on Saturday. It is being investigated whether the nearby copper mine has anything to do with it. In principle, holes in the ground can have various causes.

Around 32 meters in diameter, the depth is still unknown: That is the extent of the huge crater, which opened up in the Atacama Desert in northern Chile at the end of July 2022 without prior notice (see video). The reasons for this are still obscure. Because the hole is near a copper mine, there are concerns that the subsidence may have something to do with copper mining.

The mayor of the affected municipality of Tierra Amarilla, Cristóbal Zúñiga, said it had to be checked to what extent the hole was related to the mining work and whether the mining could pose a threat to the area and its residents. “We always feared that something like this could happen.” in one Facebook post he is even clearer: “This is the responsibility of the mining company, which has created this risk through the uncontrolled use of groundwater, the powerful explosion that destroys the ground and our homes.”

Whether this is actually the case is currently being examined, as the National Office for Geology and Mining (Sernageomin) announced. Experts are already on site.

Holes in the ground can have various causes

In fact, other causes are also possible – in general. And it’s not always man’s fault. But that also happens. An overview:

texture of the subsoil

Holes in the ground can occur wherever the subsoil consists of rocks such as limestone, gypsum or salt. These are susceptible to dissolution processes, such as those triggered by seepage water. This is slightly acidic and ensures that larger and larger cavities form in the rock over time. At a certain point the rock can no longer withstand the weight on it and it collapses. This is what happened around 2010 in Schmalkhalden, Germany (Thuringia).

Subterranean gas bubbles can also lead to the formation of burrows. These can be caused, for example, by rising volcanic gases.

In other areas, such as the Siberian permafrost, underground decomposition processes release gases such as methane or carbon dioxide. That doesn’t happen when the ground is frozen, it does when he thaws. The gases can accumulate. They won’t gradually releasedbut if they escape explosively, it can blast a crater in the subsoil.

Such gas bubbles can also be burst by humans, as the example of the Darvaza crater in Turkmenistan shows. That too “Gate to hell” The hole was created when Soviet geologists wanted to drill for oil in the Karakum desert in 1971. They drilled into a cavity filled with gas and the earth opened up. To stop the gas escaping, those responsible set the hole on fire – the fire still burns to this day.

When large quantities of drinking water are pumped from the subsoil, the ground becomes increasingly unstable and its load-bearing capacity decreases. The sinking groundwater level is about the reason why there are so many burrows around the Dead Sea in Israel (see above photo series).

Water that suddenly flows into the ground can also lead to the formation of burrows. Possible causes are a lack of drainage or broken water pipes. A leaking water pipe left one in June 2021 Pedestrian crossing in Geneva disappear. As a result, the road was washed away.

Mine tunnels, subway tunnels or subterranean retention basins of industrial plants are cavities and can make the subsoil unstable, which can lead to the ceiling collapsing if there is insufficient support. German mining areas such as the Ruhr area, where the earth is heavily perforated, are particularly susceptible to this – especially if the old tunnels were not filled in. The Lanstroper See was also created near Dortmund.

More burrows in the future

Some researchers suspect that there will be more burrows in the future because as extreme weather events such as heavy rainfall become more likely, the risk of soil undermining also increases. In addition, people – especially in dry regions – are increasingly using groundwater and extracting raw materials from the soil. The problem: Such holes in the ground are much more difficult to predict than earthquakes, for example, but they are a great danger – especially when they hit densely populated areas or traffic routes. Experts therefore recommend checking the condition of the soil more closely before carrying out ground work and new buildings in the future. Regular checks are also advisable.

Subscribe to the knowledge channel notifications in the 20-minute app. You will be informed about groundbreaking findings and discoveries from research, explanations of current events and curious news from the wide world of science. You will also receive answers to everyday questions and tips for a better life.

This is how it works: Install the latest version of the 20-minute app. Tap on “Cockpit” in the bottom right, then “Settings” and finally on “Push notifications”. Under “Topics” you tap on “Knowledge” – et voilà!