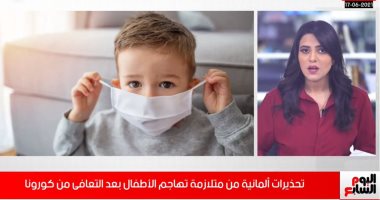 German warnings of a syndrome that attacks children two weeks after recovering from Corona..video

“Youm Seventh TV” broadcast a special coverage prepared by Esraa Abdel Qader and presented by Alaa Sheta, during which he reviewed the full details of German warnings of a syndrome that affects children after recovering from the Corona virus.

And reviewed the special coverage, that the German Society of Infectious Diseases of Children warned that . syndrome “MIS-C” You may attack children after contracting corona.

The coverage continued, that the association clarified that the term “MIS-C” It is an abbreviation of the scientific term (Multisystem Inflammatory Syndrome in Children)Which means “children’s multisystem inflammatory syndrome”.“.

And she indicated that doctors believe that the reason for its occurrence is due to the excessive response of the immune system against the “Covid 19” virus, which leads to the release of severe inflammatory responses in the entire body..

In severe cases, this serious syndrome may have a negative effect on the heart, which requires that children be admitted to the intensive care unit of the hospital.

The association indicated that this syndrome may occur two to four weeks after infection with Corona, explaining that its symptoms are as follows.:

– Rashes on the hands and feet

– Conjunctivitis on both sides

– Digestive problems such as diarrhea, abdominal pain and vomiting

– Feeling pain behind the bone of the foot

An ambulance must be called as soon as these symptoms are noticed so that the child receives the necessary medical care in a timely manner.

See also  25% of doctors denounce workplace harassment in the hospital