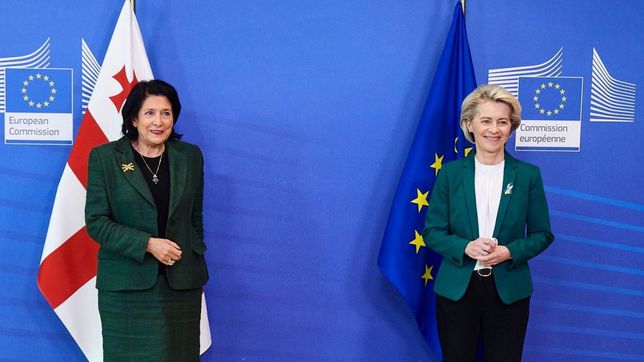 Georgia’s complaint to Russia: it accuses it of appropriation of territories

The president of Georgia, Salome Zourabichvili, has denounced this Monday a series of iRussian attempts to annex Georgian territories located in Abkhazia, a breakaway region of northwestern Georgia with many ties to Moscow. The authorities of Abkhazia, close to Russia, approved last week the transfer to the territory of the Russian Federation from an official residence and its surrounding territories in the city of Pitsunda, in northwestern Georgia, on the shores of the Black Sea.

According to President Zourabichvili, this decision by the Abkhaz authorities constitutes “a form of annexation of the Georgian territory by Russia”, and has denounced a “continuous occupation” in the region. “I strongly condemn and I ask the international community to react strongly to this,” Zourabichvili said on his Twitter social network profile.

What we’re seeing in Bichvinta is a form of annexation of Georgian territory by Russia. We see a strong popular reaction to the developments. This is the result of continued occupation

I strongly condemn this and call on the international community to strongly react to this.

Georgia and Russia maintained a brief war over South Ossetia and the Abkhazia region in 2008. After the conflict ended, Moscow, whose forces prevailed, recognized both regions as independent nations, although the vast majority of countries have not done so. The countries that recognize Abkhazia as an independent region are Russia, Nicaragua, Venezuela, Nauru and Syria.

However, for Georgia both Abkhazia and South Ossetia are “occupied territories” in which Russia has about 13,000 soldiers deployed, according to Tblisi calculations cited by El País. It is a strategic enclave for Russia: like the rest of the Ukrainian ports that Moscow controls and blocks, Abkhazia is bathed by the Black Sea. The leader of the Georgian parliamentary committee on Foreign Affairs, Nikoloz Samkharadze, believes that Russia is using the two regions to try to “destabilize” Georgia, which belonged to the USSR until its dissolution in 1991.

Context of the conflict

To understand the conflict between these regions and Georgia, you have to go back more than 100 years. In the early 1920s, the Red Army invaded Georgia and these they accused South Ossetia and Abkhazia of having supported the Kremlin. Russia annexed Georgia and both regions became autonomous zones.

After the dissolution of the USSR in 1991, the country became independent from Russia and both Osetia and Abjasia pass to form part of Georgia, a situation with which the separatists do not agree. Months of violence followed and, in 1992, Georgia, Ossetia and Abkhazia signed a ceasefire agreement.

In 2008 the Government of Georgia furious with separatists for having very close ties with Russia, while Moscow opposed Georgia’s rapprochement with NATO. Thus, Georgia and the separatist regions go to war in the first days of August 2008. After a Georgian bombardment of Ossetia, Russia decided to enter the region and balanced forces. The Kremlin, South Ossetia and Abkhazia ended up winning a war that lasted six days and ended with 800 deadaccording to an official EU fact-finding mission.