It was only seven minutes before Georgia Stanway made her Bundesliga debut. In midfield, she took down her opponent from Eintracht Frankfurt and saw a yellow card for it. It was a mixture of nervousness and trying to make her mark on the game. A show of force of sorts for their opponents and teammates.

But while Stanway may have been a little overzealous in her first league start for Bayern, the 23-year-old’s excitement and desire to play in Germany is palpable. “I’ve been interested in the way Germans play since I was a child,” Stanway told DW. “From a young age and even at national level it is always difficult to play against them. I have always admired how well they play and [analysiert; Ergänzung.d.Red.]why they are so strong.”

“Football-wise, this move suited me best because I like the tactical, technical and physical side of the German style. I knew this was where I would be challenged and encouraged the most to get the best out of myself.”

A win against Germany at Wembley in Euro 2022 should be the perfect start to Stanway’s England career. The attacking midfielder became Manchester City’s top scorer with a hat-trick in the FA Cup win over Nottingham Forest in January 2022. Seven years earlier, aged just 15, she became the club’s youngest player to make the first team . However, her final season with the Sky Blues was marked by doubts and disagreements over her place in the team.

“I was classed as versatile by the club,” Stanway said. “I played in every position and tried to do a good job for the team, but it wasn’t what I wanted. It was obviously a very difficult time when you don’t know if you’re coming or going, if one is here or there.”

“You’re not able to be consistent in your game because you’re only categorized as a ‘helper’. I tried to make the most of it, no matter what position I played.”

“Finally I was able to secure a position for the European Championships. It worked out well, but it could have gone differently.”

FC Bayern only approached the midfielder at the end of February. Although other teams also had offers, Stanway said Bayern made her feel “worthy”.

Georgia Stanway scores the winning goal against Spain at Euro 2022

Playing just 21 minutes in the Champions League at Manchester City last season was hard to accept. However, Stanway has long since made up for lost time. She played the full 180 minutes in Bayern’s qualifying win over Real Sociedad San Sebastian, earning the German representative a place in the main round of the competition.

In Bayern’s 4-0 away win at MSV Duisburg on Sunday, Stanway was involved in a superb play that led to the visitors’ third goal. Further proof that she needed little adjustment to get on the same wavelength as her new teammates.

“When you decide on a team, there’s always this thought in the back of your mind: ‘Did I make the right decision?’,” added Stanway. “To be honest, I never once questioned anything.”

“This year for me is about consistency. In this team it can also be about some leadership – not in the sense that I give orders, but simply through the way I play. I can take a leadership role by the way, either it’s by tackling at the last minute or by winning a tackle that starts an attack.”

“Being unhappy is part of football, but life is too short to just pretend everything is fine. I just want to enjoy football, play in the environment I’m in and make sure I get the best out of everything.”

responsibility of the players

After the successful European Championship in England, interest in women’s football increased again. Stanway is aware of this extra attention. The opening game between Bayern and Frankfurt drew 23,200 spectators, a record in the Bundesliga. The first match of the season in the Women’s Super League (WSL) in England was watched by a peak of 482,000 viewers, with an average of 381,000. 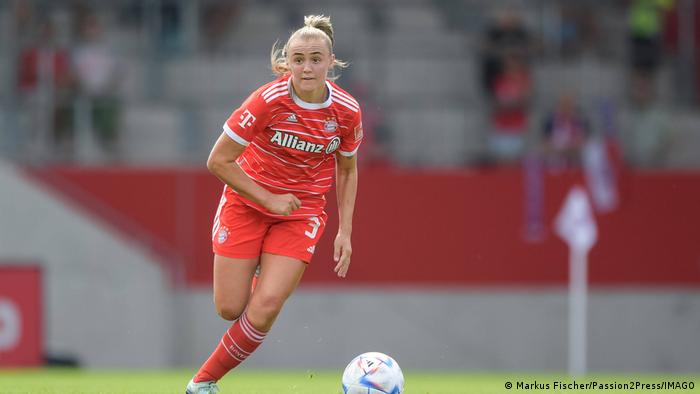 Stanway believes the players have a duty to ensure that the increased interest is not just a flash in the pan. “It depends on us as players,” she said. “We have to create a relationship with the fans on and off the pitch. At the same time, we have to play football that is attractive and fun. This is the only way we can keep the fans loyal to us in the long term.”

Stanway’s start in Germany has done just that: Bayern Munich have won five of their six games this season in the Cup, Bundesliga and Champions League, scoring an impressive 18 goals without conceding a single goal. Maintaining this level will not be easy, but Stanway is prepared for anything.

Adapted from English by Mathias Brück.