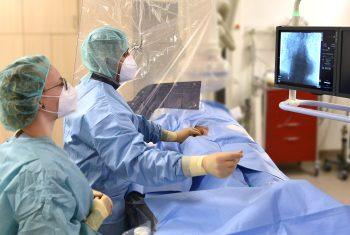 Catholic Clinic Bochum gGmbH – University Clinic of the RUB am 10.08.22

Pulmonary embolism is the third most common acute cardiovascular disease worldwide after myocardial infarction and stroke. When this happens, blood clots form in the pulmonary arteries, threatening the body’s supply of oxygen. Many patients die of acute heart failure because the occlusion is often detected too late or not at all, or is not treated adequately. A new path has now opened up for therapy, which the University Clinic for Cardiology in the St. Josef Hospital Bochum (Director: Prof. Andreas Mügge) consistently uses: the so-called ultrasound-assisted catheter-based lysis therapy.

In the case of an impending cardiac arrest as a result of an acute severe pulmonary embolism, the previous therapy usually consisted of emergency surgery or what is known as systemic thrombolysis, in which large quantities of a special drug are administered via a peripheral vein to quickly dissolve blood clots. The underlying risk, however, is that this drug can cause serious bleeding complications anywhere in the body, including the brain.

For a few years now, it has been possible to dissolve blood clots directly “on site in the lungs”. This is done with a catheter that is positioned in the pulmonary artery via a vein access in the groin. This special catheter delivers the medication locally and at the same time emits ultrasound waves. As a result, the drug works more effectively, and significantly smaller amounts are needed. This significantly reduces the risk of bleeding.

The procedure is particularly suitable for patients who have a severe pulmonary embolism or who have a contraindication to systemic thrombolysis, for example after surgery or in the case of coagulation disorders. dr Hani Al-Terki, Senior Physician in Cardiology at St. Josef Hospital, sees several advantages of this interventional technique: “The stress on the patient is low. He only needs a short local anesthetic of ten to 15 minutes. In addition, we deliver the medication through the catheter to the blocked artery with pinpoint accuracy, which means we need less of it.”

Also, the therapy is supplemented by ultrasound, so the drug works even more efficiently. The therapy is carried out for six hours. The patient does not experience any pain during this time. He can leave the clinic just two days after the operation. The risk factors for an embolism (thrombosis) include prolonged, frequent sitting or lying down, coagulation disorders, obesity and smoking. Dangerous signs are sudden shortness of breath and chest pain. “Then,” says Dr. Al-Terki, “A doctor must be consulted immediately.”