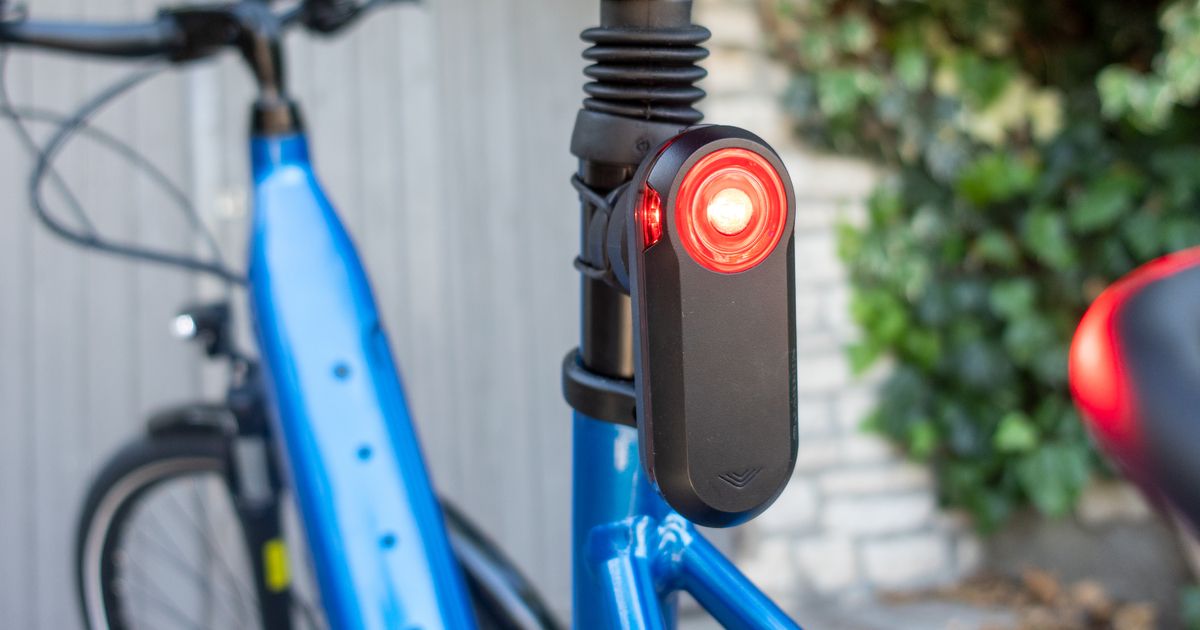 Garmin Varia RTL515 test: the radar that monitors your back on a bike

The Garmin Varia RTL515 is a small device that measures less than 10 cm high and 4 cm wide, for about 2 cm thick, excluding mounting. The rear light is easy to identify on the upper part. The lower part which seems empty actually hides the radar.

Overall, the finishes of the RTL515 are very good. The plastics used give confidence in its robustness and the assembly does not reveal any flaws. A small rubber cover placed on the back gives access to a micro-USB port to recharge the battery – not removable. This cover guarantees IPX7 certification which ensures sufficient sealing for use even in the rain.

The single button located on the box allows you to turn the radar on and off with a long press. When on, short presses will toggle between the different tail light illumination modes. It is possible to choose fixed lighting (20 lumens), a night flash mode which reaches 29 lumens, or a day flash mode which climbs to 65 lumens. Finally, a “peloton” position reduces the power of the red light to 8 lumens so as not to dazzle other cyclists.

Weighing just 71 grams, the Varia RTL515 won’t be felt when installed on a bike. The mounting system chosen by Garmin is both simple and practical. A plastic support is associated with a soft plastic end piece to best fit the upright on which it is fixed, without damaging it. A small rubber band keeps everything in place. Several sizes of tips and elastics are offered in the box to adapt to the different uprights (seatpost, luggage rack, etc.). Installation and dismantling are very fast. Garmin offers an optional screw-on support, probably to avoid having the support stolen.

In our tests, whether mounted on a seat post or a rack post, the Garmin Varia always stayed perfectly in place, even on paths that nevertheless rocked the bike and its pilot.

This fixing accommodates the radar box which is fixed to it with a quarter turn. Again, simple, practical and effective. Fitting and removing the RTL515 is a snap. The device remains in place on its support without moving.

However, keep in mind that the radar’s field of vision must remain as clear as possible. Thus, on a bike whose saddle does not go up very high and which is equipped with a luggage rack, the attachment to the seat post may not be ideal. It is sometimes enough to fix the device slightly at an angle to remedy this.

The Garmin Varia RTL515 incorporates Bluetooth connectivity that allows it to be paired with a smartphone, a Garmin watch or an Edge bike computer from the brand. We carried out our test using the Varia application on a smartphone.

Once connected to the smartphone, the radar works as long as it is switched on and the Varia application is open on the mobile. The operation of the latter is minimalist. The smartphone screen displays a green band marked with a pictogram representing a cyclist overhanging two long vertical white bands which symbolize the road.

When a car is detected approaching from behind, the color of the strip changes. It is displayed in orange when the speed of the oncoming vehicle is moderate and in red when the vehicle is arriving particularly fast. This visual signal is coupled with an audible signal which also varies according to the speed of the approaching vehicle. Finally, it is also proposed to activate vibrations to indicate the arrival of a car. Once the cyclist is passed, a signal indicates that no vehicle is detected and the bar is again displayed in green at the top of the screen.

A spotted car is indicated on the screen and its icon moves closer to the top of the screen as it gets closer to the bike. This allows you to have a good idea of ​​the distance that separates our rear wheel from the vehicle in question. The Varia RTL515 is supposed to be able to alert on the presence of several vehicles, up to 8 at a time. In practice, we rarely had more than 2 correctly positioned vehicles. On the other hand, the succession is well detected, even if a vehicle is close to the following one.

Garmin thought of not indicating an alert for vehicles driving behind the bike at the same speed. This avoids being overwhelmed with alerts, especially in town, where you often find yourself at the same speed as cars in the middle of traffic. Another good idea, the flashing of the light accelerates when we are overtaken by another vehicle, which increases our visibility vis-à-vis it.

As long as its field of view is clear, the Garmin Varia RTL515 is able to detect vehicles up to 140 m away. A distance that we could not measure precisely, but which is certainly greater than 100 m. This is enough in town, where vehicles are not supposed to drive more than 50 km/h. On departmental roads, vehicles driving particularly fast sometimes give the impression of being detected at the last moment. But we can’t blame Garmin’s radar here.

Among the regrets that we can have, we note that the radar detects that something is happening, but that it is unable to differentiate between a cyclist, a car, a motorcycle or a truck. However, knowing what doubles us can have an importance on the attitude to adopt.

It also seems that the application is not systematically recognized as a GPS authorized to run in the background. During our test, when the application was not displayed on the screen, it happened that the smartphone lost the connection with the Varia.

See also  Starting today, the link to register the gas meter reading for the home in September 2021 || How to calculate the gas meter consumption bill