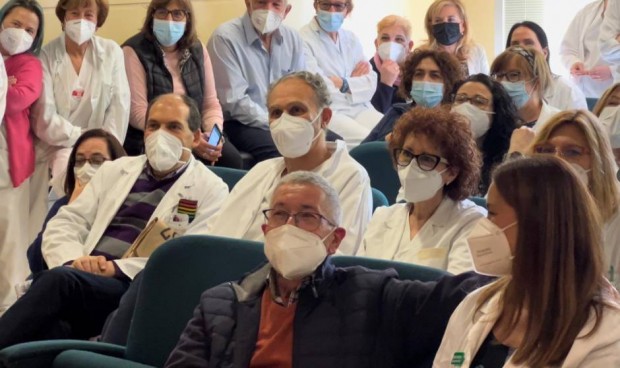 Josep Másferrer, at the bottom with a coat, surrounded by companions in his farewell.

The Head of Service Internal Medicine of the Hospital Comarcal de Valdeorras, Josep Másferrer Serra (Cassá de la selva, Girona, 1954), gives up the baton on the occasion of his retirement. Dozens of colleagues have honored him at his farewell after almost 40 years in the center of Ourense.

The tribute, among others, was attended by Felix Rubialmanager of Health Area of ​​Ourense, Verín and O Barco de Valdeorrasof the Galician Health Service.

The news channel of this Health Area has tweeted in honor of the internist: sometimes almost alonego a long way and leave great services, patients and community. Thanks Josep MASferrer“.

Másferrer has participated in the life of the scientific societies of the specialty, especially in the Galician Society of Internal Medicine (Sogami)and also in the Spanish Society of Internal Medicine (SEMI)as in the organization of the national congress that in 2021 it held in Santiago de Compostela. SEMi itself has expressed in its profile of Twitter his best wishes “to Dr. Josep Másferrer, member of SOGAMI and SEMI, after his retirement and we congratulate him on his professional work throughout these 38 years”.

He graduated in Medicine and Surgery in 1978, and began his professional career in his hometown and in the surrounding area. Later she moved to General Hospital of Asturiasin Oviedo, where he spent four years specializing in Internal Medicine.

In front of his colleagues, he recalled those first days in Valdeorras in the homage: “There were three general practitioners at the Hospital and in the town of The boat practically nothing else. Everything was left to the hand of God. it was disastrous“.