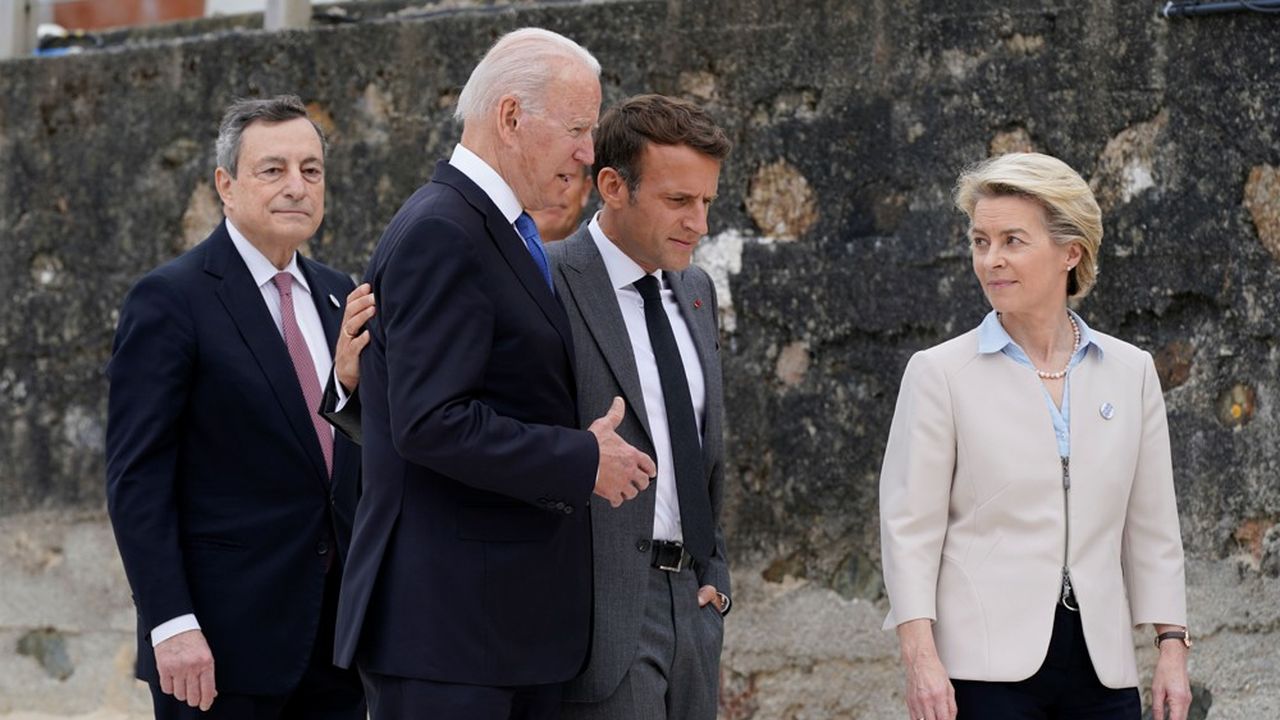 Without being invited to the table, China nevertheless intervened in the debates. Physically meeting in Carbis Bay for three days, for the first time since the Biarritz summit in 2019, the heads of state and government of the G7 strove to establish a clear line vis-à-vis the Asian giant. A delicate exercise to say the least in the face of Beijing’s offensive.

“The days when global decisions were dictated by a small group of countries are long gone,” a spokesperson for the Chinese embassy in London blasted on Sunday. Two days earlier, Beijing had set the tone during a telephone exchange between Antony Blinken, US Secretary of State, and the head of Chinese diplomacy, Yang Jiechi. For the latter, “the only genuine multilateralism […] it is the one who treats everyone as equal and promotes mutually beneficial cooperation. “Not the pseudo-multilateralism based on the interests of cliques and on a policy of the blocs”, he had hammered, according to the Chinese channel CCTV.

A rival and a partner

Sunday, at the end of the summit, on the occasion of his final press conference, the French head of state, Emmanuel Macron, wanted to calm things down.

Our method of getting out of the pandemic is clear: share our vaccine doses, but also open access to production on all continents. pic.twitter.com/UZSz1xmGVm

“The G7 is not a club hostile to China,” he stressed. But, “we must not give in to any naivety” whether it is vis-à-vis China or vis-à-vis Russia, he said. On Saturday, the European leaders of the G7, the United Kingdom excluded, had agreed on a clear line with regard to Beijing: China is “a systemic rival, a partner on global issues, and a competitor” , had indicated the French presidency at the end of their discussions. China’s actions worry Western democracies and Japan. It’s a fact.

The decisions of the G7 summit may irritate the Chinese authorities. G7 leaders on Sunday called on China to “respect the human rights” of the Uyghur Muslim minority in the Xinjiang region and Hong Kong. Without mentioning their suspicions about the activities of the laboratory in the city of Wuhan, which could be at the origin of the Covid-19 pandemic, the leaders of the G7 are also asking the World Health Organization for a further scientific investigation. on the origin of this coronavirus. What Beijing categorically refuses.

Compete with the New Silk Roads

On another note, they referred to a vast infrastructure plan to help developing countries and poor countries. The project, which implicitly wants to be a competitor of the Chinese “New Silk Roads” program, was unveiled by the White House on Saturday even before the end of the summit. Estimated at more than 40,000 billion dollars, it focuses on climate, health, digital technology and the fight against inequalities. “It’s not about pushing countries to choose between the United States and China. It is a question of proposing another vision and another approach ”, assured a senior American official.

Joe Biden hit the nail on the head on Sunday: “We believe there are more equitable ways of meeting the needs of countries around the world,” he said. “We know there is a huge need for infrastructure in Africa […]. We cannot just say that China will take care of it, ”for her part explained German Chancellor Angela Merkel.

Last Tuesday, in a rare moment of union between Democrats and Republicans, the US Senate adopted a bill providing for ambitious investments in science and technology, presented as a “historic” text to counter the economic threat from China and its “authoritarian” model.

The Europeans however intend to keep a certain independence vis-à-vis Washington, even if a “growing convergence” on China is emerging within the G7, according to a senior American official present in Carbis Bay. But Germany is reluctant. She was hesitant about this proposed alternative to the New Silk Roads. If the final G7 press release does not mention any amount for this infrastructure project, Berlin would be behind it.

Europe is therefore walking on eggshells. Last Friday, however, European companies in China expressed deep emotion. The day before, a Chinese law against foreign sanctions had been adopted, risking to place multinationals in a delicate position, the European Union Chamber of Commerce had alerted. Faced with Western pressure, China on Thursday equipped itself with a vague legal arsenal that legalizes reprisals in the event of foreign sanctions against Chinese individuals or entities. The text legalizes “the sealing, seizure and freezing of property” of people or companies that would apply sanctions against China. Tensions are likely to continue or even increase.