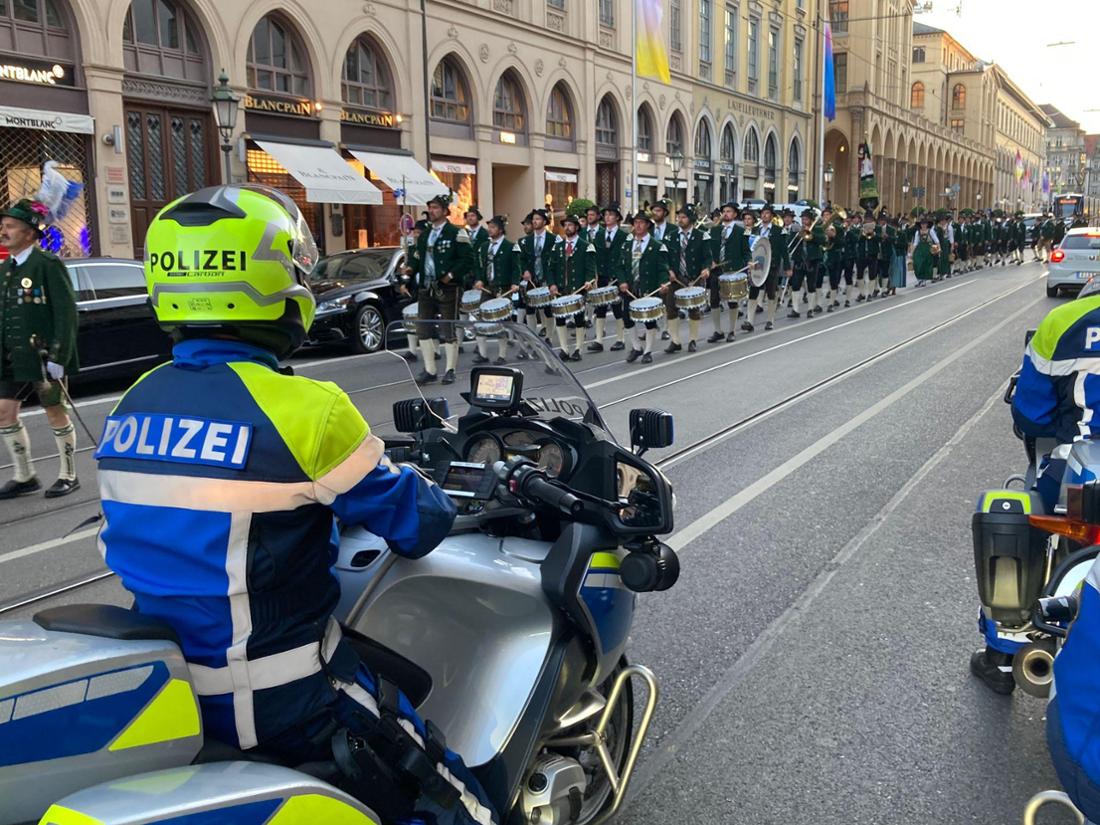 The G7 summit at Schloss Elmau has begun. US President Joe Biden flew into Munich with Air Force One.

Update June 26, 10 p.m.: Demonstrations are expected again on Monday – the second day of the G7 summit. From 10 a.m., a star march is planned on several routes to the conference venue at Schloss Elmau. However, the police are expected to bring only a 50-strong delegation in buses within sight of the summit site. The remaining participants will have to end their protest marches against the G7 summit further away from the venue.

Update June 26, 9:15 p.m.: Due to the closure and the police operation in downtown Munich, a long tram jam has formed on Maximilianstrasse. The reason: the mountain riflemen are marching out of the Bavarian State Chancellery. There Prime Minister Markus Söder (CSU) receives, among others, South African President Cyril Ramaphosa for a side summit.

Update June 26, 8:29 p.m.: Although the G7 summit is taking place in Elmau, there are still traffic delays in Munich. A long tram traffic jam has formed on Maximilianstrasse. There is a large police presence.

According to the Munich Transport Company (MVG), there are delays, cancellations and premature turns due to a police operation in the Maxmonument area. The tram lines 16, 19 and 21 are affected. “The disabilities are expected to last until 9:10 p.m.,” says the MVG.

Update June 26, 6:52 p.m.: The G7 demo in Garmisch-Partenkirchen has now ended. The police estimated the number of participants at around 800 to 900, but the organizers spoke of 2000. The rally was accompanied by a massive contingent of security forces, but was largely peaceful.

As the police later made clear, the arrested man was not a participant in the demonstration. Observers of the situation described that the arrested man was drunk. He repeatedly insulted the officers and offered massive resistance when he was arrested. The police announced further investigations.

Incident on the sidelines of the G7 demo in Garmisch-Partenkirchen: Man injured and arrested

Update June 26, 5:55 p.m.: An activist was arrested and injured at the G7 demonstration in Garmisch-Partenkirchen. The man repeatedly insulted officials and resisted his arrest, the police said. He was also slightly injured. The officials announced further investigations.

The fact that the G7 summit is taking place in Elmau continues to fuel discussions. The mayor of Garmisch-Partenkirchen, Elisabeth Koch (CSU), commented again on the decision: “That can’t be true,” she thought. Journalists from all over the world have come for the G7 summit. They report on their work on site.

Update June 26, 5:25 p.m.: The demonstration train against the G7 summit has meanwhile reached its starting point again in Garmisch-Partenkirchen. This is where the final rally takes place. According to the police, around 800 people took part. The train had stalled in the meantime due to discussions about the conditions, but overall it was peaceful. The rally was accompanied by a massive contingent of security forces.

A G7 demo took place in Munich on Saturday. The event was mostly peaceful – but there were eleven arrests. Four activists had to appear before a judge on Sunday. There are also investigations against a police officer.

G7 summit at Schloss Elmau: Bad weather apparently made it difficult for Biden to arrive

Update June 26, 2:37 p.m.: US President Joe Biden did not fly the last few kilometers to the G7 summit in Schloss Elmau (see original message). In contrast to most of the other high-ranking guests, the 79-year-old was escorted around 40 kilometers from the Ohlstadt airport to the conference hotel in a long motorcade on Sunday night.

The reason, according to information from the German Press Agency: Due to bad weather, the US President’s pilots were not able to practice landing near Schloss Elmau sufficiently often in the days before the summit. The “Bild” newspaper first reported on this. A few hundred meters above the hotel, a large hiking car park was paved especially for the summit, so that several helicopters can land there for important guests.

Updated June 26 at 1:53 p.m: Ex-ski star Christian Neureuther goes hiking with the partners of the G7 heads of government on Sunday – but Jill Biden rejects it and other first ladies are not there either.

Update June 26, 1:04 p.m.: The protest march against the G7 summit at Schloss Elmau has begun in Garmisch-Partenkirchen. Our on-site reporter reported a “very manageable” number of participants at the beginning. According to his estimate, around 150 demonstrators are initially on the move. Organizer Franz Haslbeck expected that the number of participants would increase significantly. However, he admitted: “The mobilization power is actually decreasing. In any case, there is less mobilization than seven years ago.”

Update June 26, 12:20 p.m.: At the press conference of the G7 opponents’ protest camp, the activists gave an insight into their planned actions for the next few days. The big demo in Garmisch-Partenkirchen is scheduled for this Sunday at 1 p.m. One expects participants who are currently on their way from Munich. On Monday at 10 a.m., star marches will take place with activists from the Global South, and a hike towards Elmau is also planned.

G7 summit in Elmau: activists in the protest camp complain about demo requirements

There were complaints that the actions were approved very late and that conditions were surprisingly decided. The letter from the authorities said that outhouses had to be set up for the demo and that dogs were also forbidden. The activists complained against both points. Toilet houses do not have to be set up after all, the ban on dogs remains. A demo at Schloss Elmau was also initially banned. 50 demonstrators are now allowed to demonstrate, but they should be driven there with police buses. This is not reasonable for the participants.

The activists are also complaining about the stand at the castle. “It’s not within call and sight,” emphasized applicant Franz Haslbeck. 500 meters as the crow flies between the planned location and the conference venue Schloss Elmau. “They wanted to take us for fools, there’s no other way to put it.” In the end, the camp expresses its solidarity with two people who were apparently arrested in Garmisch-Partenkirchen last night.

Update June 26, 12:33 p.m.: Official start of the G7 summit: Federal Chancellor Olaf Scholz (SPD) received the heads of state and government of the G7 countries in the Bavarian Alps on Sunday afternoon. Scholz and his wife Britta Ernst welcomed their prominent guests to Schloss Elmau, in the midst of the magnificent mountain scenery of the Wetterstein Mountains. Immediately afterwards, the first working session was planned.

After the G7 demo in Munich: Do several activists have to be arrested?

Update June 26, 12:04 p.m.: After the G7 demonstration in Munich, four participants were still being held on Sunday morning. A judge should decide later in the day whether they should be held in custody, a police spokesman said. The investigators accuse the four activists of dangerous bodily harm for attacks on police officers. The background is clashes between demonstrators and police officers at the rally on Saturday through Munich. The police are investigating a total of six activists for violence against those in uniform. The officials put the number of arrests on Saturday at nine, a final balance was still pending on Sunday morning.

See also  60 points in Orlando at 20/31 shooting including 41 points in the first half, the Brooklyn wizard hit the top

Update June 26, 10:12 a.m.: Protest at an altitude of 1600 meters: A sixty-meter-high peace sign made of burning candles, attached by Greenpeace activists, could be seen on a rock face of the Waxenstein on Saturday evening. The action before the G7 summit at Schloss Elmau did not go unnoticed by the police. She controlled what was happening by helicopter, but did not intervene. Greenpeace confirmed on Twitter around 10 p.m.: “10 Greenpeace activists protested at the #G7summit in Elmau on the Waxenstein near Garmisch-Partenkirchen. A mountain fire was burning on the slope.”

Update June 26, 9:18 am: Markus Söder welcomed US President Joe Biden ahead of the G7 summit in Elmau at Munich Airport. There was criticism of the outfit of the CSU boss online. “What kind of clothes did Mr. Söder take out of the closet? Bad, bad and bad again. This man is a textile wrong-way driver,” was a particularly nasty comment. The 55-year-old received US President Biden in a traditional costume jacket.

Biden landed in Munich: heads of state travel to the G7 summit

Munich – The arrival of the heads of state and government at the G7 summit at Schloss Elmau near Garmisch-Partenkirchen has so far passed without incident. The police reported on Sunday morning (June 26) that there were initially no disruptive actions or blockades by opponents.

Officials stood along the so-called protocol route across Garmisch-Partenkirchen on Sunday morning. The roads in the town are closed when the convoys of heads of state traveling to the G7 summit pass. There are fences along the protocol route in the Garmisch area, and tens of thousands of manhole covers have been sealed to protect the vehicles from possible attacks.

US President Joe Biden arrived on Saturday evening (June 25) for his first visit to Germany since taking office. Air Force One with the President on board landed in Munich late in the evening. He was welcomed by Prime Minister Markus Söder.

The US President then traveled on to Elmau by helicopter and car – the protocol route was closed to other traffic around midnight for his arrival. In some cases, pedestrians were not allowed to cross the street.

The focus of the top meetings of the G7 and NATO will be the Russian war of aggression against Ukraine and its consequences. The meeting lasts until Tuesday.