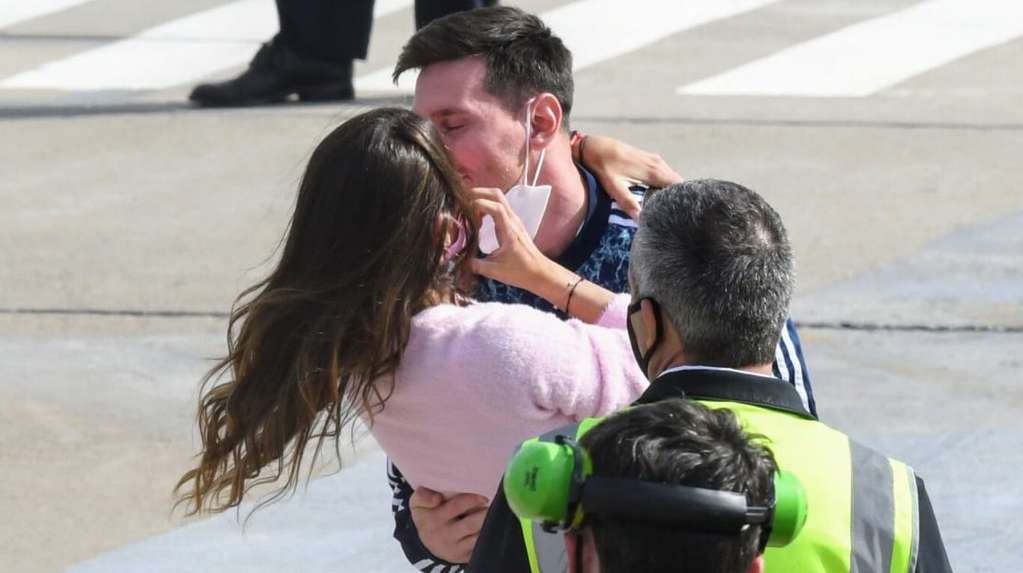 Antonela Roccuzzo expressed his anxiety long before the plane carrying Lionel Messi You will land at Rosario Airport. He did it when he got out of his truck and while he checked the time on his cell phone. She exhibited her feelings during the incessant walk that she starred on the track a few minutes before her husband, triumphant and smiling, appeared for the reunion.

It was a couple of jumps and a spontaneous run. A hug in the air, some words in the ear and a repetition of kisses that were immortalized in the camera of Juan Jose Garcia, the Rosario photojournalist who follows in the footsteps of the Argentine soccer player every time he arrives or says goodbye to his hometown.

// As it was never seen: the video that Messi recorded in the Maracana dressing room during the celebrations of the Argentine National Team was leaked

After a long wait – customary before each arrival of Messi- García identified that that event would also mark a before and after in his more than 25-year career. “It was on the first floor overlooking the track, with mirrored windows. I usually wear the glasses that I use in football matches, because when the plane lands we know that, between descending the ladder until they get on the bus that carries them along the runway, there are 13 seconds to shoot”, He told TN.com.ar.

However, the photographer understood very early that time would play in his favor. Is that Messi appeared at the airport -together with Angel Di Maria Y Young Lo Celso– on Sunday before 1:00 p.m. and, unlike what has happened on other occasions, no group was waiting on the track to transfer them to the customs area.

“The relatives were waiting for them with their private vehicles. And what surprised me was seeing her at Antonela so happy. But before it came, huh. I was jumping on the spot. When he observed that he was coming and he was alone, he had a spontaneous reaction: run to hug him. I believe that any woman who does not see her husband for 50 days would also miss him, but her reaction was different, ”García said.

And he added: “Besides, after jumping on him and hugging him, she hugged him again. She was happy that her husband was returning to Rosario happy. For me it was something that she did not think about, it was an instinct. It was the first time I saw him return to his city happy”.

The 43-year-old reporter knows the footballer’s inner circle well. He began to carry out journalistic guards for five years to Clarion Y Ole and accompanied him in various events, such as his marriage. “Three days of guard at the airport for the arrival of the guests. From 8 in the morning until 23 without knowing who was coming or which flights they were arriving on. Then I was at the wedding, on the red carpet. And I saw the kiss that was given before all the cameras. I assure you it was not as passionate as this”, He revealed.

For García, the demonstration of love that he registered last weekend made him feel much more sensitive than usual: “I am married and my wife, Ada, has three children (Julián, Marianela and Celeste) from a previous marriage. Now we are expecting a five month old baby, possibly called Melody. This moved me because I thought of them, that like my wife, they were a fundamental pillar so that today I am where I am ”.

The Rosario journalist, a fan of Newell’s, remarked that he managed to distinguish “a loving reaction, full of affection. They did not speculate with the media, it was spontaneous. “

“His family circle is very intimate and does not transcend much what happens. Yesterday I was from 8 in the morning until 19 at the airport, because they said that Messi and his father (Jorge) were flying to Buenos Aires to do some paperwork. His plane came, landed, stayed 50 minutes, and left. You have to do permanent guard for Messi because you never know, he is a box of surprises“Garcia indicated.

And he continued: “It is very closed (the inner circle) because the father prefers it to be that way with the press. What’s more, I think that for the father the fewer days he is in Rosario the better. But not because he has something against it, he loves the city. The issue is insecurity”.

García reported that Messi, “before shutting himself up in private neighborhoods, he would walk through its streets and visit his friends. One day a madman slapped him in a corner and from then on he locked himself up in the countries. I think he wants to sit on the sidewalk and have a soda with his friends, but unfortunately he can’t do it ”.

“He is a very normal boy. Those who know him say he is a wonderful person, a barbarian type. Now he is happy in his city again, and he always remembers Rosario. That makes it very different from the rest, ”Garcia completed.