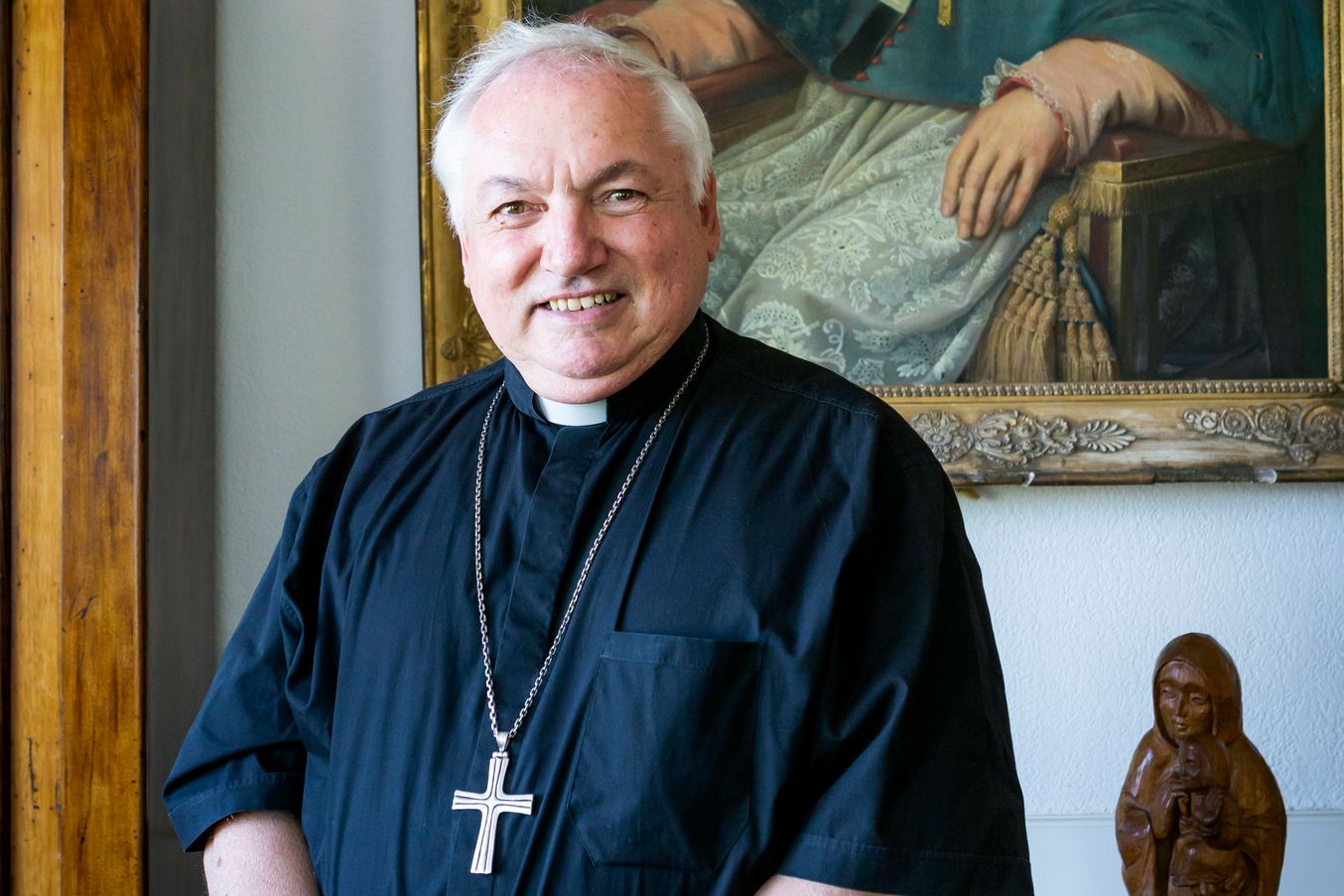 The cross : You learned on May 29 of your creation as cardinal on August 27, on the occasion of a consistory. What does this appointment change for you?

Archbishop Jean-Marc Aveline: I am only now beginning to measure what is changing in my mission… I admit that it is dizzying, but the joy and prayer of the people of Marseille reassures me, and I want to keep this anchor in what is my first workplace apostolate. I also feel that this cardinal is likely to strengthen the bonds of brotherhood that I maintain with the bishops of France. But of course I feel a certain weight on my shoulders!

Mgr J.-MA: I don’t feel like representing a cause that I should be promoting by taking advantage of an advantageous situation. Because what characterizes a cardinal is the link with the Holy See and even more with the person of the pope and the service of his ministry. I do not yet know the field of action for which he will ask me to help him more. I feel that the question of the Mediterranean is close to his heart; maybe it will give us the opportunity to visit Marseille… During a conversation with him I also understood that he likes Marseille because it is on a dividing line which is also a meeting place: both a gateway to the East and a gate to the West.

You will be the only cardinal to hold a French episcopate, which gives you a special place the church of france?

Mgr J.-MA: Right now, but it’s just a hunch, I think so. However, a cardinal, even the only one – while waiting for others – is not the representative of the bishops of France. But I do feel that it gives me a special mission, especially so that people in Rome better understand what is happening in the Church of France, what is being sought in the midst of the difficulties and crises that make us cross.

Besides that of Marseille, how do you view the fractures of French society?

Mgr J.-MA: I am worried, worried even. I notice that there is a difficulty for us to debate without insults. Abstention in the last elections reveals a lack of confidence in those who have a political connection. In my meetings with a certain number of elected officials here in Marseille and in the region, I never stop encouraging them: it is good for people to take care of the City and commit themselves to serving their fellow citizens .

But France needs hope today! It harbors too great a doubt about itself, about its vocation as a people, about what in its long history has provided it with wealth that can be useful to others. Consequently, France’s note is almost missing in the present concert of nations, because it is not sure enough of itself.

See also  A priest abused by another in the French Church speaks: "You cannot say more than just a couple of bad apples"

You describe a France weakened by its fractures. How to face those who affect the Church of France?

Mgr J.-MA: First, to return to Jesus Christ and welcome the community that his Spirit wants to weave between us in the service of the love with which the Father loves the world. Next, give priority to the mission, because this is the existence of the Church: it exists to proclaim the Gospel by serving the dignity of each person, by working in the service of the common good, by working for unity of the human family and conscience help to stay awake, all because of the Gospel and in a ceaseless dialogue with all men and women of good will. Finally, the regular adaptation of the internal organization of the Church to the ever-new requirements of the mission.

With the crisis of sexual abuse, secularization or even the crisis of professions, do you think that the Church of France is doing badly?

Mgr J.-MA: I don’t think she’s bad. It is certainly going through a series of difficult crises. And this is not the first time in history that she sees them a little ahead of the others. I remember that, when my predecessors went to Rome, they were often lectured about the lack of dynamism of their dioceses. Now that the wave of secularization has reached more eastern countries, we are asked for advice on how to hold on in such a context… And then certain crises are salutary. The report of the Independent Commission on Sexual Abuse in the Church (Ciase) and the work that the Episcopate carries out with all the faithful make us more vigilant and attentive to the victims and compel us to examine our conscience in detail.

Pope Francis has already pointed to the paradox of the French Church. On the one hand, it has to face the steamroller of a secularization that may act more strongly than elsewhere, because of the political option of secularism. This has advantages because it puts citizenship above denomination, but it also has the risk of turning into secularism, which is like a new religion. And on the other hand, the pope underlines that the Church of France is amazed by the abundance of holiness it evokes. So it is not lacking in resources, as I often see, especially among young people.

Visits have recently been made to dioceses, to Toulon and Strasbourg, to new communities… Is this a sign that the Church of France is having problems with governance, or that Rome does not like France?

Mgr J.-MA: First, it must be recognized that governance, whether ecclesiastical, political or economic, is increasingly difficult. I’ve heard from enough officials in these areas to know: today anyone who exercises authority is very quickly seen as a target. In the Church, the problems are perhaps reinforced by the sacramental dimension linked to the charge of those who exercise an episcopal or presbyteral ministry. A certain number of habits must also be reviewed – which Pope Francis denounces under the name of clericalism, which moreover does not only affect clergy. But let it be said that “Rome does not love France”, no! Rome loves France enough, on the contrary, to exercise, when necessary, a vigilance which is not suspicious.

How did you receive the feedback from the field within the framework of the Synod about the future of the Church? Should we move to a fully synodal church?

Mgr J.-MA: On this subject of the synod I believe that the thing is worth more than the word. And I think the adjective synodal should eventually disappear as it would have become synonymous with ecclesiastical. Basically, it is a “ecclesiastical” Church that we want: a Church that departs from an operation that is too exclusively hierarchical.

With this synod we are in a process that seems to me almost as important as a council, with the difference that Pope Francis wanted the word to be given to all the people of God first. Then it will be necessary to build something with it. You can see some lines. And also limits: participated in the synodal meetings of the believers of a certain age group, but much less young people. However, a picture of the grandparents does not give a fair picture of the family and its dynamics…

Would you say that the Church needs reform to announce the faith to another world?

Mgr J.-MA: The Church is always being reformed (“always reformed”): the day when she would claim that she no longer needed to reform herself, she would no longer be faithful to her Mystery! But for that he must deploy an unfailing fidelity to tradition and a fearless openness to the questions of today’s world. Tradition is a matter of responsibility. Each generation must expose the deposition of faith to the questions of its time. The generation of fifty years ago had no problem with the climate emergency or with biomedical ethics: we did! And it is also about these questions that we must explain our hope.

Furthermore, I think that the Synod has not yet given all its fruits because it was very interested in the functioning. Now the Church’s reason for existence is not to see itself functioning, but to serve God’s love relationship for the world (John 3:16).

Is the word of the bishops still audible? What is it expected and can it be heard?

Mgr J.-MA: In my small experience, you should not speak too often, but dare to do it on time and untimely. When the bishops act as relays for the voiceless, their words are heard, even if they are disturbing. Of course, one should always strive to live up to what one says. We do not give lessons; we bear witness, even if it costs us. So yes, I think it is important for the Church to be able to take a stand. That said, it is not because you speak that you are heard, even if we pretend to listen to you!

You are the chairman of the National Pilgrimage for the first time. Do you have a special relationship with Lourdes?

Mgr J.-MA: I first went there as a child, as a family. Bernadette’s simplicity, her freedom, her dignity, have always touched me deeply. I happened to be returning from an episcopal pilgrimage when I learned of my appointment as cardinal on May 29. The day before, in front of the Cave, I asked the Lord precisely for the grace not to allow my joy to be tarnished by all the worries of church life – and I pray to him all the more for that today!

This National Pilgrimage is also an opportunity to pray for France and for peace: when I see the Marian devotion of the Ukrainians in Zarvanycia like that of the Russians before the icon of Our Lady of Kazan, I tell myself that we do not war can endure without zealously entrusting to the Virgin Mary the desire for peace that lives within us.

The theme of the pilgrimage in 2022 is “Let us become witnesses of hope with Mary”. How can we keep reasons for hope in these difficult times?

Mgr J.-MA: To maintain hope, I believe in the importance of an inner work of decentering, which consists in learning to be happy in what the grace of God accomplishes in other people. It is through this call to conversion and reconciliation that the Holy Spirit weaves community between us and orients it towards the mission. I am often in awe of people of all ages, believers or not, who seriously experience life, its joys and its sorrows, and who keep in their hearts, against all odds, the desire to live and do good to others. It helps me to bear witness to the love with which God, in Jesus Christ, loves the world, to heal and save it, and it is this love that is my hope.