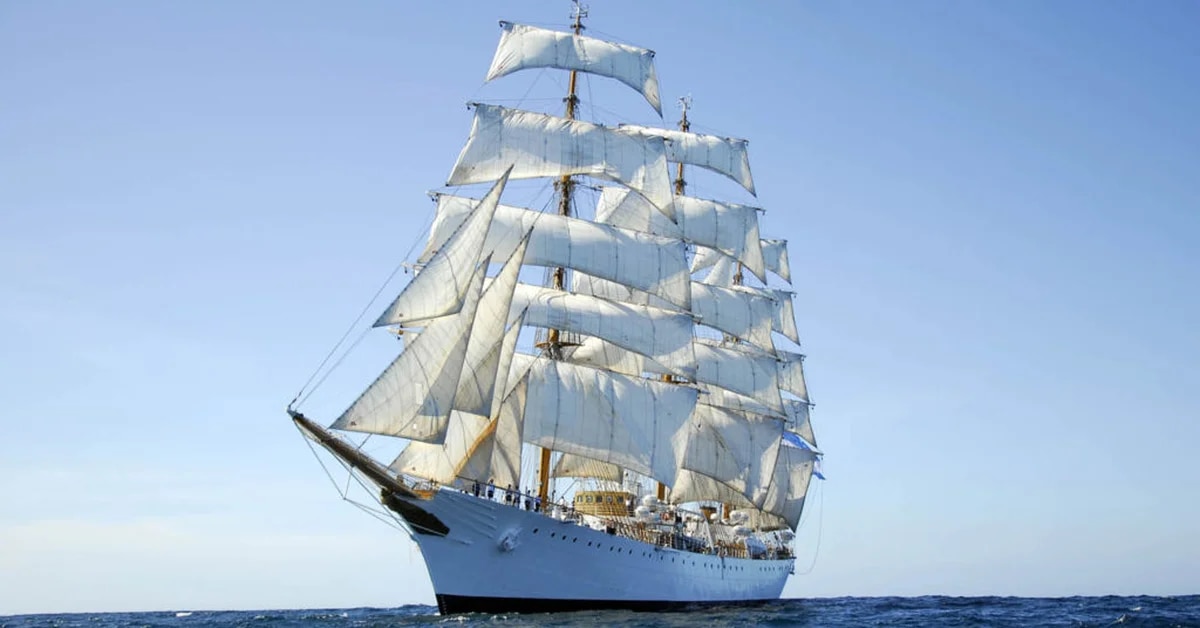 Fragata Libertad: a life at sea between storms and the love story behind its figurehead

It was four in the afternoon on Wednesday, June 19, 1963, when Captain Horacio Ferrari he gave the order to cast off the moorings, in the midst of general jubilation. The Frigate Libertad began its first training trip around the world.

The Frigate Libertad, on its first voyage in 1963.

Between November 1888 and June 1889 the corvette “La Argentina” had completed its fourth training trip. Martin Rivadaviahis ship’s captain, said that due to the defects that the ship had, it was essential to replace it with a more modern one.

It was in 1893 that it was decided to build another training ship. This is how the frigate “Presidente Sarmiento” was born, which between 1899 and 1939 made 37 trips around the world. From the following year, that task was in charge of the modern cruiser “La Argentina”.

The predecessor of the Fragata Libertad was the Presidente Sarmiento. This photograph is from her maiden voyage.

Again the construction of a new one was imposed. On November 13, 1953, the Ministry of the Navy authorized its construction and on December 11 work began at the Río Santiago Naval Shipyard. That day the then president Juan Domingo Peron he was invited to drive the first rivet into the keel of the ship. On April 27, 1956, the name “Libertad” was granted.

The war flag that the frigate flew on its first voyage. It is displayed in a chest on the ship.

All set for the game. The topmen at their posts and a crowd on the dock.

The first figurehead was made by the sculptor Luis Perlotti. But when they placed him he was left with his face looking down and the piece was rejected. On her first voyage, the frigate sailed without a figurehead. They commissioned the Galician sculptor Carlos Garcia Gonzalez, who to do so was inspired by his wife, who passed away before his placement. It was carved in Paraguayan cedar in the naval arsenals of Retiro and measures six meters.

In 1961, the frigate captain was appointed commander Atilio Porretti. This officer, with experience in sailing, was in charge of selecting the gavieros personnel -personnel in charge of the ship’s masts- and he resorted to the old boatswains of the Sarmiento frigate. On May 28, 1963, it was officially delivered and incorporated into the Navy.. In the following days, the necessary preparation was completed to put the ship in optimal conditions to face the almost six-month campaign that took it to various foreign ports.

The deck of the ship seen from above.

Prior to the start of this journey, a test navigation of machines was carried out. While anchored in Puerto Madryn, it withstood a storm with 60-knot winds, which made it heel into the wind.

Minutes before the game, the then president Jose Maria Guido read the corresponding sailing order to start a new course: “This trip is carried out under the protection of a sacred word for man: “freedom”. For her fight in war and in peace all the peoples of the earth; At his conjuration, the most notable feats in history were accomplished, and it could be said that the fundamental object of life is freedom.

“A School Ship is a piece of the Republic that travels through the hostility of the seas to tell the countries that our institutional, technical, educational and political reality travels, and to bring them a message of peace and brotherhood.. The sea should not be but a path for the peoples, the paths separate or unite; the sea must be the path that leads to a greater rapprochement, to a deeper understanding, to a more effective brotherhood among men”, said the president.

Cadets from the last year of the Naval Military School embarked with the purpose of completing their professional training and graduating as midshipmen. There were also naval applicants completing their last cycle of instruction to be received as first corporals.

Chronometer that belonged to the Fragata Sarmiento. It was delivered to the ship on her first maiden voyage.

That first voyage comprised 66 days in port, 104 days at sea and some 18,257 nautical miles sailed, visiting Atlantic ports such as Recife (Brazil), Boston (United States), Lisbon (Portugal), Boulogne Sur Mer (France), London (England), Dakar (Senegal), among others, counting among its guests the scholarship holders of the Navy of the United States, Paraguay, Peru, Brazil and Uruguay and the representatives of the Argentine Army and the Argentine Air Force.

In each of the ports, the topmen stood on the yards in the role of honors, as is the custom in most navies that have this type of training ship.

Aerial view of the ship, with its sails unfurled.

During the stay in the port of Hamilton, capital of Bermuda, withstood the ravages of Hurricane Arlene with winds of 160 kilometers per hour. The eye of the hurricane, which passed exactly over that point, was clearly visible on the frigate’s radar and despite the damage it caused to the island, the ship was unharmed.

The professor of mathematical analysis participated in that first trip. Juan Maria Alessiwho was commissioned by the commander to record the events of the trip.

Currently, the ship is in the middle of the voyage.

They returned on Friday, December 6 of that year. From his first trip to the present, the frigate ARA “Libertad” traveled more than 900 thousand nautical miles around the world and away from his perch he has spent the equivalent of 17 years at sea. They have passed through its covers and Around 12,000 Argentine Navy sailors have been trained.

These days it is anchored in Havana, the capital of Cuba, fulfilling one more mission.

The genius of Guillermo Brown in the victory of El Buceo, the deception of the royalists and a broken leg