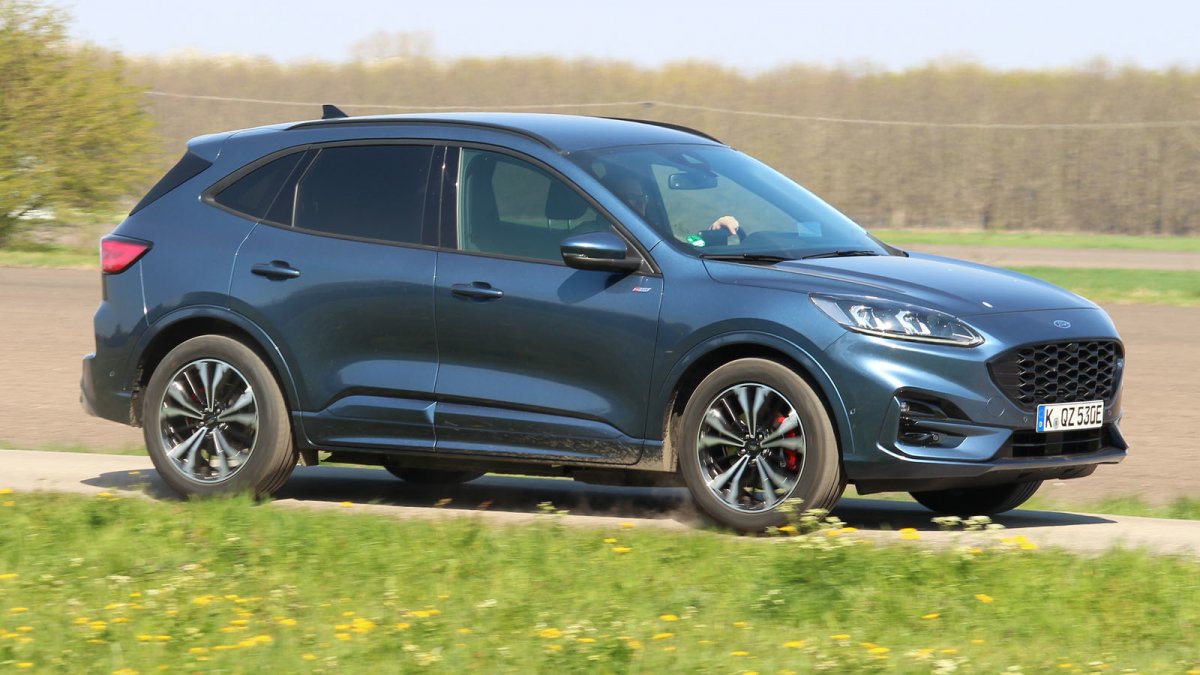 Déjà-vu towards childhood: The first few meters that the Kuga Hybrid covered electrically in our test reminded me acoustically of the trips on the Berlin S-Bahn at a time when the capital was still divided and the jerking over it Villages appeared forever. It is a low-frequency, swelling sound, which of course only resembles a bit in the pitch of the moves that have been used for so long, in no way in terms of volume. What is remarkable about the Kuga Hybrid, however, is a completely different circumstance, as our test shows.

The plug-in hybrid drive in the Ford Kuga did not have an easy start. Last year, Ford had to stop deliveries after a fire in the area around the battery on some models. These problems should now be resolved. The storage unit has a gross energy content of 14.4 kWh. Ford does not reveal how much of it can be used exactly. Including charging losses, when using the standard pre-charger we came to 12.3 to 12.5 kWh, which were necessary for a full charge. However, the reserve that remains in the battery after the remaining range is specified as zero kilometers in the instrument cluster seems to be quite considerable – more on that in a moment.

I was quite astonished about the possible range in E-mode. If the car signaled 39 km at the start, it was up to 53 km in the end – overland in eco mode and a cautious driving style, but at temperatures between 7 and 11 degrees. Ford promises up to 56 km in the WLTP, which seems absolutely believable. When applied to the recharged amount of electricity, this means a minimum consumption of 23.2 kWh / 100 km – a comparatively low value for a plug-in hybrid.

But the Kuga Hybrid also surprises on this side of a previous charge. On a drive through heavy rush hour traffic, the on-board computer provided the following values:

The on-board computer showed this result due to heavy rush hour traffic. Not very impressive, do you think? Well, at the start of this ride …
(Photo: Martin Franz)

Mind you: At the start, the battery was allegedly empty, the remaining range for electrical operation was given as zero. Judging by this, it was still several kilometers without the combustion engine. Ultimately, Ford cheats when it comes to specifying the electrically driven distances, but only a tiny bit: Whenever fuel consumption is at zero, the electricity meter starts to work. So even if the driver lets the Kuga roll into the next village.

Strictly speaking, this is not entirely correct, because at this moment none of the drives is actually taking care of the propulsion, not even the electric motor. According to the display, we achieved a minimum consumption of 4.8 liters in the test without prior charging, and then after refueling it was 5.2. Just for the sake of completeness: Of course, you can consume significantly more than 7 liters.

The internal combustion engine in the Kuga is also unusual. It is a 2.5-liter four-cylinder without charging. The naturally aspirated engine works in the Atkinson cycle. Here, the inlet valve closes later than normal, i.e. not until well after bottom dead center. The efficiency is slightly higher, power and, above all, torque slightly lower. The petrol engine has an output of 112 kW (152 hp), the electric motor in turn contributes 97 kW. In combination, it is a maximum of 165 kW, because here too the respective maximum outputs are available at different speeds.

No current Kuga offers so much performance, but if you buy the SUV with a view to it, you may be disappointed. Sure, with this engine, the Kuga is no obstacle to traffic, but there is little that encourages you to scare it away. The continuously variable transmission quickly causes high speeds in the event of a spontaneous acceleration request, which may be efficient, but seems a bit trying. The peace and quiet, which is so pleasant during a quiet journey, is then gone, without it proceeding faster to the same extent. In other words: there is a little too much noise for a comparatively restrained pace. Despite a system output of 165 kW, the drive is far more interested in a leisurely ride than a dynamic one.

A few things are also noticeable negatively: The brake is difficult to adjust. The interaction between recuperation and service brake is not convincing. A different braking effect with the same pedal pressure means that the driver has to continuously readjust. That can be done even better. When out and about in E-mode, the petrol engine is suddenly on when the load requirement is just a tiny moment above what the electric motor can deliver. That is to be expected and also not unusual.

However, the drive train cannot then be persuaded to let the combustion engine rest again quickly. All that remains is a restart – in other words, stopping once to completely switch the ignition off and on again – or drive several kilometers in hybrid mode until the controller is convinced that the current driving style can also be managed with the electric motor alone .

The Kuga is similar to the current Focus. Even in our small editorial team, opinions differ as to whether that is just okay or good.
(Image: Florian Pillau)

Our third point of criticism does not exclusively concern the Kuga, but also many other plug-in hybrids: the maximum charging power is reached at 3.7 kW. Some manufacturers are now addressing the problem of the lame loader, presumably the customers who actually recharge a plug-in hybrid protested long enough. In this Ford, however, this is not yet the case: Here, at best, you wait around 3.5 hours to fully recharge an empty battery. With the standard pre-charger, fused with ten amps as usual, it is more than five hours. While shopping in the supermarket, you should also have a significant reach: That doesn’t work in the Kuga either.

For a long time I associated Ford with a certain kind of shirt-sleeving on the surface, which should not be confused with a lack of reliability. The previous Focus was a good example of this: Due to its somewhat rustic composition, it was often underestimated, which makes it an insider tip on the used car market.

In terms of its superficial appearance, Ford has made huge gains in recent years. Overall, our test car was neatly put together, nothing seemed overly cheap. So I was all the more surprised when a small part of the door panel came towards me. Since the rest seemed really stable, this may have been an isolated incident. With the design, too, Ford has found a pleasant calm without falling into dullness.