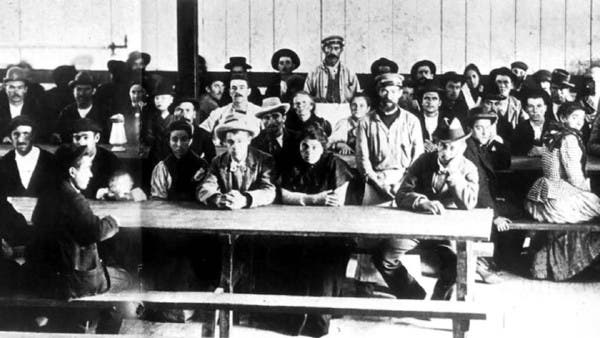 For these reasons, Europeans migrated heavily to Argentina

Between the nineteenth and twentieth centuries, the country of Argentina became a destination for European immigrants who came to it from different countries. In addition to the majority of Italian and Spanish arrivals, many Slavs of Ukrainian, Polish, Russian, French, German, Danes, Swedes and Jews did not hesitate to immigrate to Argentina, either to improve their living conditions or to search for a safe haven and the scourge of persecution they suffered in their countries.

With their arrival, these European immigrants contributed to the remarkable increase in the population of Argentina and brought with them to this country new European concepts that emerged with the revolutions of the nineteenth century and the spread of the Industrial Revolution, such as socialism, anarchism and unions.

Before the onset of European immigration, Argentina had a poor population, with the latter suffering from a sparse population. During the Spanish occupation, Madrid officials preferred to adopt a policy that encouraged immigration to both Peru and Mexico, ignoring Argentina. Because of the war of independence and civil wars, the population of this country declined remarkably.

A picture of European immigrants who settled in Argentina

Faced with this situation, Argentine officials decided, beginning in the 1850s, to adopt a new immigration policy directed primarily towards European immigration. In the Constitution of 1853, Argentina specified a clause that demanded the abolition of all obstacles for European immigrants to facilitate their entry into the country.

Italian immigrants in the Argentine capital

In addition, European immigrants flocked to Argentina in the nineteenth century for many reasons. While the majority came in search of a better life, a significant number of Italians and Spaniards escaped from political problems and security restrictions in Europe because of their affiliation with trade union organizations and workers and their support for the World Labor Association, which is often called the First International.

Like many Spaniards who emigrated in the 1870s to escape the ravages of the Third Carlist War, during the same period a significant proportion of German immigrants who left their homeland following the decisions of German Chancellor Otto von Bismarck against the Socialists in 1878 came.

During the 1850s, small groups of Italians began arriving in Argentina. But between 1880 and 1920, Italian immigration to this southern American country reached its climax and reached its peak between 1900 and 1914.

Between 1880 and 1920, more than two million Italians came to Argentina during a period when the population of this country did not exceed 8 million. At that time, this figure represented 60 percent of the total number of immigrants. In 1914, there were 300,000 Italians in Buenos Aires alone, which is equivalent to more than a quarter of the city’s population. In addition, 50 percent of the total Italian arrivals were able to write and read, and they were among the country’s active class, where most of them worked as farmers and practiced crafts and trade.