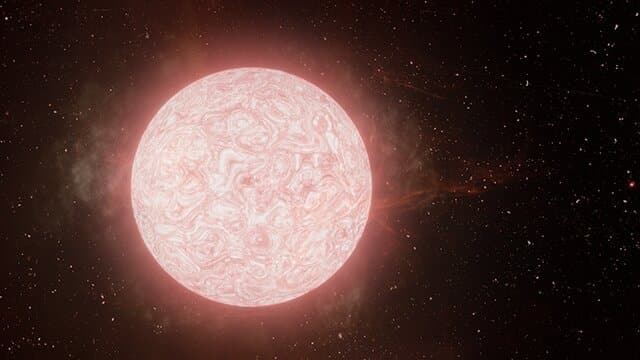 “For the first time, we saw a red supergiant explode”

Astronomers witnessed the dramatic end of life of a red supergiant star in “real time”, watching its rapid self-destruction before it collapsed into a Type II supernova. This work, published in The Astrophysical Journal, challenges previous ideas about how these objects evolve just before they die.

Red supergiants are relatively massive stars entering their Main Sequence phase. In other words, they have consumed all of their hydrogen and will soon die. The Young Supernova Experience survey recently made it possible to follow the evolution of one of these heavyweights at the end of their life.

As part of this work, researchers relied on the Pan-STARRS telescope and the WM Keck observatory, both in Hawaii. The massive doomed star was first detected in the summer of 2020, betrayed by its massive amounts of radiation emitted into space. About 130 days later, in the fall of 2020, she ended her life as a supernova “under the eyes” of astronomers.

« This is a breakthrough in our understanding what massive stars do moments before they die“, Says Wynn Jacobson-Galán, of the University of California at Berkeley and lead author of the study. ” Direct detection of pre-supernova activity in a red supergiant star has never been observed before for an ordinary Type II supernova. For the first time, we saw a red supergiant star explode!«

A tumultuous end of life

The researchers quickly captured the powerful flash and obtained the very first spectrum of the energy explosion, named the 2020tlf supernova, using the Keck Observatory’s Low-Resolution Imaging Spectrometer (LRIS). These data testified to the presence of a dense circumstellar material surrounding the star at the time of the explosion. It was probably the same gas that betrayed the presence of the star before.

A follow-up examination of the supernova, carried out from the Keck Observatory, also determined that the star, once located in the galaxy NGC 5731 about 120 million light-years away, was approximately ten times more massive than the Sun.

Finally, this new finding challenges previous ideas about how red super-giants evolve before they explode.

Previously, all objects of this type indeed appeared relatively calm, showing no signs of violent eruption or light emission. Here, the detection of intense radiant activity during the last year of this star suggests that at least some of these stars must undergo significant changes in their internal structure before their collapse.