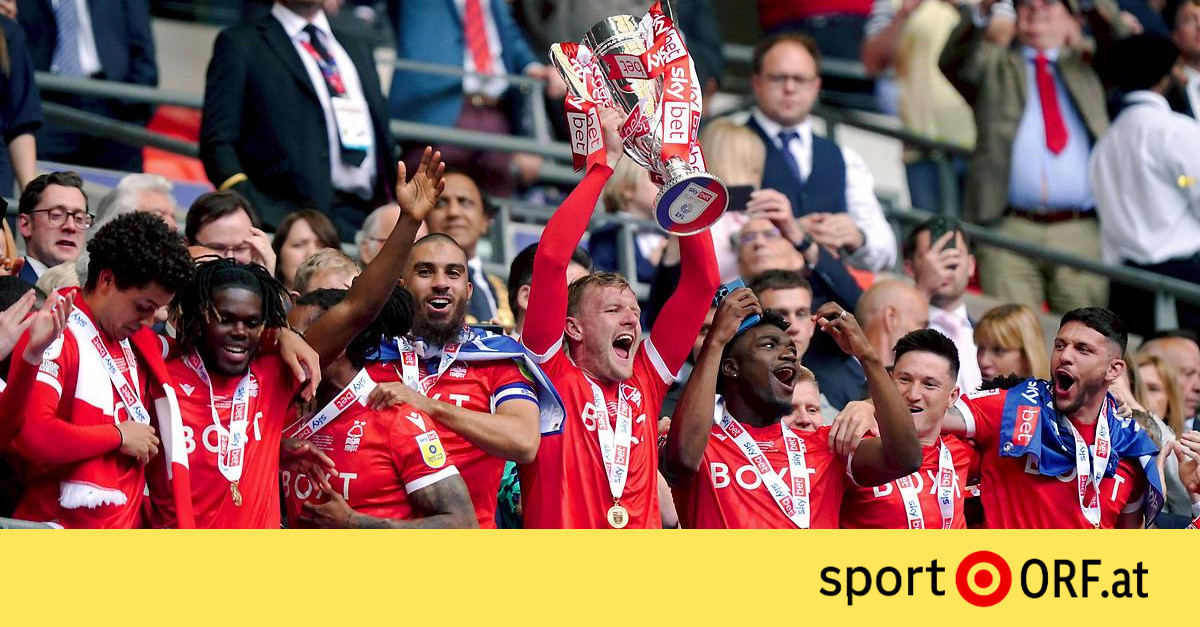 Football : Nottingham Forest are back

In front of 80,019 spectators at London’s Wembley Stadium, Huddersfield defender Levi Colwill scored the decisive own goal in the 43rd minute, which secured Nottingham’s third promotion ticket after second division champions FC Fulham and AFC Bournemouth. According to financial experts, the leap into the English top flight is worth at least £170m (€200m) thanks to sponsorship and TV money.

The season had started anything but glorious for Forest. After seven match days with six defeats and only one draw, the club was only at the bottom of the table. Only with coach Steve Cooper, who replaced Chris Hughton in September of the previous year, did success return to Nottingham. “He came and gave us that hope, gave us that faith,” said Captain Joe Worrall. “He just lifted us up with kindness and the fans absolutely adore him.”

In any case, the longing of the fans for the successes of earlier days is great. Nottingham shook up European football 40 years ago under legendary coach Brian Clough, winning the 1979 and 1980 European Champion Clubs’ Cup, the precursor to the Champions League. The bitter transition to the second division 23 years ago then lasted longer than expected and initiated a long dry spell. In 2004, as the first ever European Cup winner, they even fell into the third division, only in 2008 Forest managed to get promoted back to the second division.

Despite several attempts, the course for the Premier League was only set in 2017 with the takeover of the club by the Greek shipowner Evangelos Marinakis, who also owns Olympiakos Piraeus. When the former US national player Dane Murphy was appointed managing director last year and the squad was successfully reduced and rejuvenated, the path to the English top league was mapped out after the initial difficulties at the beginning of the season.

The return of the “Tricky Trees” or the “Garibaldi Reds”, as the club is also known, makes football nostalgics in particular reminisce. In the 1970s, when the established top clubs were initially fighting for the titles in the European Cup, an English climber of all people set out to break the dominance. After Feyenoord Rotterdam, Ajax Amsterdam, Bayern Munich and Liverpool, Nottingham Forest made their debut without any big stars. The best-known player was goalie Peter Shilton, who also made a total of 125 international appearances.

First, the club left the “Reds” behind as a promoted team from the second division and knocked out the defending champions in the following season in the first round of the European Cup of National Champions. A run of success followed, culminating in a 1-0 win over Malmö FF in the final thanks to a goal from Trevor Francis. As the defending champion, Forest was allowed to compete again next year and this time won the final 1-0 against Hamburger SV. The scorer was John Robertson (20th). Nottingham Forest is the only club to have won the European Champion Clubs’ Cup more times than the national championship.

Crash and comeback after a long wait

The club, which also won the FA Cup twice (1898, 1959), had its heyday behind it. In the European Cup of national champions the following year, they were eliminated in the first round against the Bulgarian champions CSKA Sofia, in the championship it was only enough for seventh place in the table. Although there were a few respectable successes afterwards, such as reaching the semi-finals of the 1983/84 UEFA Cup, the European crown had been out of reach since then. In 1993 they were relegated to the First Division. There was a back and forth between the first and second leagues until the long wait began in 1999, which ended on Sunday, at least for the time being.

The joy and relief at the comeback in the concert of the greats was correspondingly great. On Monday, thousands of fans gave Worrall and Co. an enthusiastic welcome in Nottingham and transformed the square in front of City Hall into a sea of ​​red and white. “I’m so proud of the players, the support team and the fans,” said the 25-year-old. “We played really well, not only this season but before that too. I’ve seen a lot of good people come and go, all of whom have contributed. It is a great honor to be the captain.”