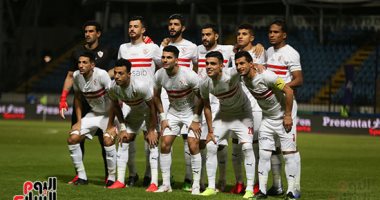 The Egyptian Football Association’s competition management decided to hold the match between Zamalek and clearing Egypt, in the quarter-finals of the Egypt Cup, at nine in the evening, Tuesday, June 22, at the new Suez Stadium.

French coach Patrice Carteron, coach of the Zamalek team, asked his assistant staff to prepare some players technically and physically to face Aswan, scheduled for June 17, in the 26th round of the league.

Cartieron asked to prepare substitutes for Ashraf Bencharki and Ferjani Sassi after their return from the national teams of their countries, Morocco and Tunisia, respectively, as the two are scheduled to return two days before the match and are expected to be late, which means that they will not catch up with the match or their lack of technical and physical readiness as a result of exhaustion and travel, as the team faces Morocco His Burkina Faso counterpart will be on June 12, while Tunisia will face Algeria on June 15.

It is expected that Cartieron will push Imam Ashour in the center of the defense next to Tariq Hamed, while Shikabala will participate in place of Ashraf Ben Sharqi in the event of their absence from the match.

On the other hand, the intention within the Zamalek club administration headed by Hussein Labib is to enter strongly in the file of renewing players whose contracts expire at the end of the next season, before the negotiations between Zamalek and the players worsen, and the scenario of the Tunisian international Ferjani Sassi, whose contract expires at the end of the current season, has not been reached. An agreement between him and Zamalek until this moment.

See also  Surprise .. "Awad" was excluded from the meeting between Zamalek and Aswan for punitive reasons

The club’s management assigned Hussein Abdel Latif, a member of the council, to supervise the file of the renewal of the players, who are Moroccan Ashraf Ben Sharqi and his compatriot Mohamed Onajem, loaned to Moroccan Wydad, and Abdullah Juma’a, Mohamed Abu Jabal, Tariq Hamed and Ahmed Sayed Zizou, provided that Mahmoud Abdel Razek Shikabala, the captain of the team, is one of the means of assistance. For the management to convince his colleagues to sign for Zamalek, in light of the strong relationship that Shikabala connects with all the players, and his ability to persuade them and facilitate the negotiation process with his colleagues.