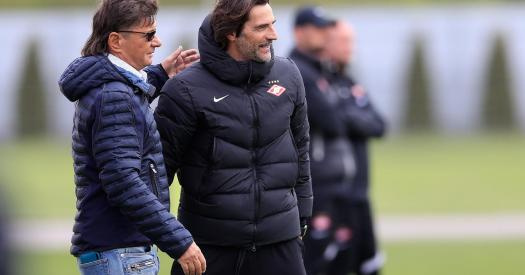 Foggy prospects. A revolution is coming in Spartak: Fedun, Bakaev, Zhigo and even Vanoli will leave

On Sunday, Spartak finished the season on a positive note – a bright victory in the Russian Cup. The main faces celebrated the trophy and smiled, but sadness flashed in their eyes. The club president Leonid Fedun was the first to hint at his retirement: “I came to Spartak in 2003 with a victory in the Cup. So my cycle is complete.” And when asked about the fate of Paolo Vanoli, he replied that it did not depend on him.

A little earlier, information appeared that Fedun and his wife Zarema Salikhova were moving away from the operational management of the club, although they would retain the shares. But one of the main shareholders, Vagit Alekperov, is selling his stake to Lukoil, where he was the head of the board of directors until April (he owns 28.3% of the company’s shares).

The fate of the club is now incomprehensible to the general public. Who will manage it? An oil giant? What goals will he pursue? Fedun once said that Lukoil’s investments in Spartak were the best advertising investment. If so, it is in the interests of the company that the club be successful, because the brand is associated with it. On the other hand, how effective can a large corporation be in managing a non-core asset?

MONEY WILL BE LESS

While the signals from the club cause more pessimism. So, even before the final, it became known about the disbandment of Spartak-2, which played in the FNL. And this is very bad, since the double allowed the club to involve more of its own pupils and give them a serious platform for realization at a professional level.

Now it will not be, and the guys will simply have nowhere to prove themselves for real. The only option is to rent to other teams, but the RFU has set a limit on them, so this career development will still have to be earned. How can one not recall the words of Fedun that the content of the entire double is approximately one salary of a legionnaire?

See also  'In the end we will be ready'; Borussia Dortmund say goodbye to Haaland

Apparently, the budget of the club will be reduced. The media even give figures – from 11 billion rubles in two years to 4 billion, that is, almost three times. The disbandment of Spartak-2 will obviously not save the budget.

BAKAEV LEAVES, ALTHOUGH EVERYONE IS AGAINST

Another alarming signal is the departure of his own pupil Zelimkhan Bakaev, one of the best players on the team, if not throughout the season, then at least in the spring. The coaching staff pushed him further and further away from the game (they didn’t even let him on the field for the final), and sports director Luca Cattani did not renew his contract.

After the final, Bakaev confirmed that he was leaving the team, and stressed that this was happening against his will. “I don’t know what this decision is connected with. Of course, I wanted to stay… Even now I’m waiting to be told that they’ve changed their minds. I don’t know what I did to anyone. Already in the winter I understood what would happen, but I still gave all the best to slam the door loudly, ”he said immediately after the game.

There is an opinion that Salikhova was against Bakaev. He admitted that he had heard about this, but did not understand what it could be connected with: “I saw her once, we had a good talk. So I hope it’s just a rumor.” According to Bakaev, the club did not make a single proposal for an extension, so the question is not about finances: “There were no real negotiations. Therefore, talking about the fact that I ask a lot is a lie.

It is all the more surprising that the general director of Spartak Evgeny Melezhikov says exactly the opposite things – the offer was made six months ago. And the sports director of Cattani, who deals with such issues, generally disowned this situation: “I have a close relationship with Bakaev. We are like friends, but there are club parameters. After the game with Rubin, we stopped all negotiations to extend the contract. It does not depend on me. I don’t have the authority to renew his contract, but I need to speak with the owner tomorrow to finalize his departure.”

I wonder what kind of owner and what parameters are we talking about? Financial? Is the club so low on budget? And who will now make a decision on Bakaev? One can imagine that Salikhova influenced this process six months ago, but now she definitely has nothing to do with contracts. Or?

See also  Ovechkin is helped even by other people's goalkeepers! Bobrovsky gave a super match and stopped Ovi's main competitors - 01/21/2022

In general, Spartak again plunges into darkness, when nothing is clear – neither management, nor the principles of organization, nor goals and objectives, nor financial capabilities, nor the personnel of the performers.

VANOLI GETTING READY TO DEPARTURE?

In this situation, it is not surprising that the “Championship” fired an insider that head coach Vanoli could leave. Colleagues are already actively interviewing experts and specialists on this topic. According to their information, the Italian announced his decision to the “entourage”, but has not yet announced to the club.

At the same time, Cattani, for example, would like to continue cooperation: “For me, Paolo is the best. And the numbers will confirm this fact – he showed a better start than all the last Spartak coaches. None of them showed such a result in such a short time.

The support of a sports director is one of the foundations of a good job, but if Vanoli wants to leave on his own, it hardly makes sense to keep him. In the club, by the way, the news was called a fake, but it says that the coach has not yet communicated with the management on this topic. So the alignment can be anything. And if the Italian says “ciao”, then you need to look for a new coach – already the fourth in the last year after Domenico Tedesco, Rui Vitoria and Vanoli.

ON LOAN PLAYERS FOR ONE MORE SQUAD

So it turns out that Spartak is waiting for a transition period, while some leaders will transfer cases to others, and those will have to delve into the process from scratch. At the same time, it will be necessary to resolve the issue of the head coach and the squad for the next season, because in addition to Bakaev, the pillar of defense, Samuel Gigot, has left. It will be even more difficult to replace the latter, because there are almost no good defenders with a Russian passport, and it has become more difficult to bring a quality foreigner into the country in recent months. Plus economy mode.

See also  Why Andorra has become a cyclists' paradise

Also, do not forget that despite the relatively small clip, Spartak has a lot of players on contracts, many of which are scattered on loan. Gus Teal, Pedro Rocha, Jordan Larsson, Maxim Glushenkov, Jorrit Hendrix, Ayrton, Ezequiel Ponce, Oston Urunov – a whole team, and almost all legionnaires. Definitely good pay. Someone, however, does not want to return, like Larsson and Til, but this only means that difficult negotiations are ahead of the club. How can they be conducted if there is no certainty about the future?

Plus, Spartak owns Alex Kral. West Ham have not yet made an attempt to buy him, and he has no such obligation, since the conditions of the loan have not been met. Will Londoners be willing to pay for a player who has played 150 minutes of the season? Sounds unconvincing.

In general, a month and a half before the new season, Spartak has too many variables to call its future cloudless right now. Red-and-white fans have been waiting for Fedun to leave, but today such an outcome looks daunting.