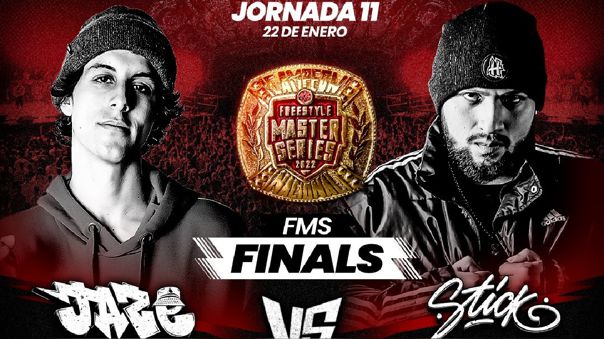 Unpublished final date of the FMS Peru 2022. Three rappers arrived with an option to win the trophy on the last day and it was impossible to choose a favorite.

Necrosis was the one who led the standings until last date, but lost against Jaze in an unforgettable battle. Jaze, with the direct victory, reached this last day equaling his rival on points.

On the other hand, I was Stick, who did not have a regular season so he was the one with the least chance of winning the league; However, after winning with a reply to Diego MCHe made it to the final phase.

The table was as follows before the final day: Jaze and Nekroos with 21 points, and Stick with 19. The battles to define the champion were Jaze against Stick, and Nekroos against Vijay Kesh.

In the first confrontation, the former representative of Alternate Support had to win directly or add points in a replica and wait for the results of the other match. In the case of Stick, the only option he had was to directly beat the World Champion of God Level de 2022 and hope that Nekroos doesn’t beat Vijay outright.

As for Vijay Kesh, his participation was important since if he beat Nekroos he would be relegated from championing the league for the first time. So it was. The representative of “Rímac millenario” took advantage of the resources of the previous day to attack his rival for his lack of loyalty to his partner from God Level 2019. Nekroos tried to answer everything, but the public was on the side of “Gato” .

Despite the reply, Vijay would take the battle and complicate the situation for his rival who now depended on Jaze losing without reply to Stick.

In the final battle, Jaze y Stick They gave a freestyle recital, each one in their own style, but turning the public on with each intervention. The creator of “Akel pastel” was not going to attack, but his way of flowing at the base made him connect immediately with the public. In the case of Stick, the “King of the Plazas” had his strong points in the minutes “to blood” where the three-time national champion of the Battle of Roosters did not stop attacking his rival with his rhymes.

After a very even battle, the confrontation went to a replica and with this, Stick was out of the race; however, he beat Jaze and added two points.

With the two favorites falling in their confrontations, it was necessary to resort to the PTB (Points Per Battle) where Jaze beat Nekroos by 129 points and became the two-time national champion of the Freestyle League (Freestyle Master Series).

We present RPP’s on-demand audio so that you can listen to it whenever, wherever and however you want, on our platform or on the subscription platform of your choice. Here you will find some recommendations of the week included in our catalogue.