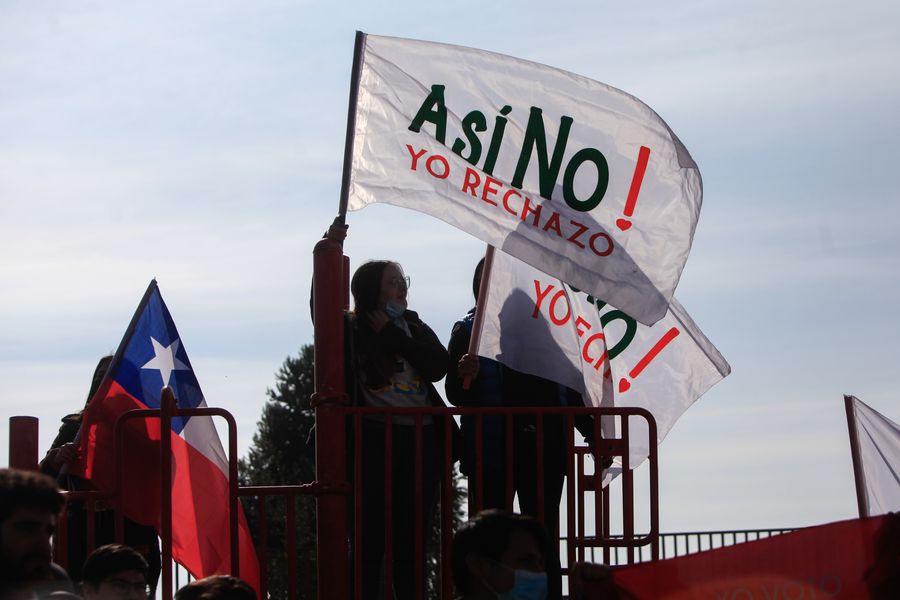 Florida, Maipú and Puente Alto: the focus of Rejection

“Don’t settle! She is very bad. Rejection X Love”. This is how a paid ad on Facebook from the Citizen Rejection Strip starts, which, like most of the paid advertising on that social network, is mainly concentrated in the Metropolitan Region (39%), followed by the Biobío Region ( 12%) and Valparaiso (10%).

It is no mystery to anyone in the Rejection campaign that the RM is the main electoral bastion that they must win against the Approval. For the same reason, these days, in Chile, Vamos and the Republican Party will concentrate their forces in that area, especially in communes of popular sectors, where there is greater adherence to a new Constitution.

Connoisseurs of the territorial strategy say that in the RM the right has the biggest challenge. In this place, the sector was severely defeated in the municipal passes of May 2021. There it lost emblematic communes, such as Santiago, Maipú, and Ñuñoa, among others, which caused it to lose what they call “territorial muscle.”

For the same reason, the bloc’s parties have commissioned measurement surveys to measure the environment by commune, with the aim of being able to focus their efforts.

In that group they have discussed the strategy, on which they have a point of consensus: politicians must remain out of the front line. In fact, there was a bad evaluation of the Rejection tour made by the mayors of Providencia, Evelyn Matthei (UDI), and of Puente Alto, Germán Codina (RN).

The idea that has gained strength is that having mayors and councilors deployed does not have much repercussion, but that younger figures should be appealed to. The community leaders, when they go to campaign on the ground, people ask them to account for their management, they say, experts in the strategy, which distorts the tours.

To this is added that they have not been able to convince some community leaders to deploy with more force, as is the case of the mayor of Florida, Rodolfo Carter, who has had a low deployment.

also searched prevent MPs from campaigningand that civil society leaders do it instead.

The diagnosis is not to carry out any massive act for the Rejection, in order to prevent that option from being dominated by the right, or that supporters appear with party flags. What has predominated in recent times is to make silent tours in the field, where the ex-conventionals meet with groups of local leaders who allow “the needle to be moved”. Likewise, it is contemplated to visit fairs and go door to door.

The UDI, for example, has prioritized faces such as former constituents Constanza Hube, Carol Bown and Katherine Montealegre. “The Metropolitan is the pretty girl in this election and in the face of the grotesque interventionism of the government we are working with volunteers, mainly women. In some communes we hold councils, in others house to house”, says Montealegre.

On the right, they affirm that there are communes that have won, such as those in the upper neighborhood. There the Rejection was imposed in the last plebiscite and is expected to do so again. Las Condes, Vitacura and Lo Barnechea are mentioned.

However, in Chile Vamos they observe what they have called “yellow communes”, where preferences are divided: Ñuñoa, Providencia and Santiago.

Similarly, they are pending in the communes dominated by DC mayors, such as Peñalolén, with Carolina Leitao.

In the opposition they look carefully at the role that some mayors of the ruling party have had and whether or not they can move the needle. For example, the act was disturbed by the Approval made in Maipú by the mayor Tomas Vodanovic (RD), or Emilia Rios (RD)who has participated in field activities with neighbors for the Approval.

Part of the strategy of the right will be to target these mayors with accusations of interventionism. In fact, the UDI will especially open a website to denounce the acts: “Plebiscite without cheating.”

The strategy will also include an advertising attack on radio. However, this will be geared more towards regions.

In the sector they are observing what other groups can do for the Rejection that come from outside the political parties. Thus, it looks carefully at how the territorial deployment of Amarillos by Chile could be, which was born more as a proposal from the center-left.

Beyond the fact that, these days, in the sector they will be focused on reinforcing the Metropolitan Region, they are also considering deploying in the Valparaíso and Biobío regions.