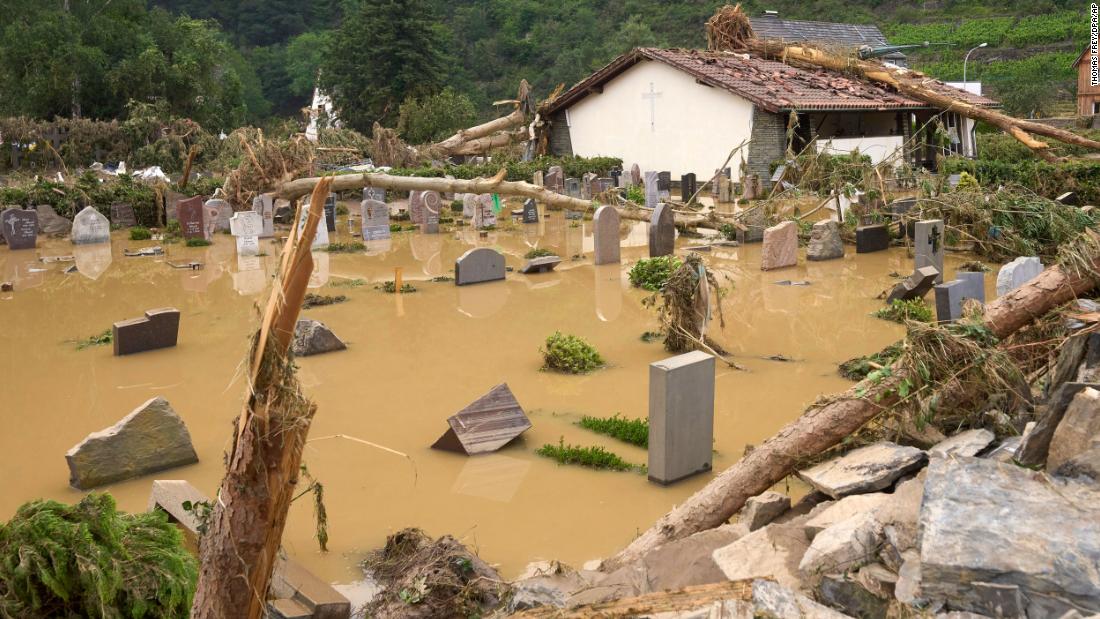 (CNN) — In Altenahr, in western Germany, not even the dead were spared from this week’s devastating flood. The village cemetery was swept away, the tombstones damaged and toppled by the force of the muddy water.

Antoinnette Steinhoff stands on the edge of the flooded cemetery, devastated by the sight of the destruction in front of her. “My mother is there,” he says, pointing to a black marble grave with a cross on top.

When floods hit the town, the 76-year-old saw an entire house washed away. Two people were still inside, Steinhoff said. “They found one of the bodies in the vineyard,” he added.

Much of Altenahr is now in ruins. The restaurants scattered along the banks of the river have been completely destroyed and whole pieces of buildings torn to pieces. In some areas, the watermark reaches the middle of the second floor.

The streets, or what remains of them, are under the mud, the cars wedged between collapsed buildings and piles of rubble.

It’s a scene seen across large swaths of Western Europe after the catastrophic flood that killed at least 157 people and left hundreds more missing.

Antoinette Steinhoff stands on the edge of the flooded cemetery in Altenahr.

More than a hundred fatalities

At least 133 people died in Germany when floods swept through the western states of North Rhine-Westphalia, Rhineland-Palatine and Saarland. In Belgium, 24 people were confirmed dead as of Saturday morning, and authorities warned that the number could rise.

Luxembourg and the Netherlands have also been affected by extreme rains, but have reported no fatalities.

The images showed entire towns and villages underwater, cars wedged between collapsed buildings and houses buried under landslides and debris.

According to the Interior Ministry, around 22,000 firefighters and humanitarian workers are involved in rescue and recovery operations in North Rhine-Westphalia alone.

Residents described the chaos that ensued when the water rose, making escape from the area impossible and trapping people in their homes.

Kautsch lives in Erftstadt, a city near Cologne that is now one of the symbols of destruction. Several buildings, including parts of a historic castle, were destroyed after a large sinkhole was opened in a nearby quarry. “The water flowed and pulled parts of the city into that hole, and now … the fire department says there could be so much water under buildings that many buildings can still be damaged and crash,” Kautsch said.

Lines of communication remain disrupted in flooded areas, leaving people unable to communicate with loved ones.

Thousands of people missing from the floods

Koblenz police told CNN on Saturday that while the whereabouts of 1,300 people are still unknown, authorities expected the figures to be revised downward as the rescue operation continues.

“There is no end in sight yet,” Ulrich Sopart, a police spokesman in the city, told CNN. “We hope that some people have been registered as missing two or even three times, if, for example, a family member, a work colleague or a friend has registered a missing person,” Sopart explained.

“What’s more, [en] some places the phone lines still don’t work and reception is difficult. We hope that people will get in touch with a family member, a work colleague or a friend to let them know that they are doing well, “he said.

Populations along the Ahr River have been left without power and telephone coverage, with some areas completely cut off, forcing the military and search and rescue helicopters to survey the area from the air for stranded survivors.

A dam along the Rur River in North Rhine-Westphalia broke on Friday night, according to the regional government. Authorities began the evacuation of some 700 residents in the Ophoven neighborhood in the city of Wassenberg.

Across the border in Belgium, the Belgian army fights against time with search and rescue operations.

Marie-Louise Grosjean, a shop owner in Pepinster, Belgium, saw a decade of hard work washed away by water and mud on Friday when water poured into her wine and décor shop. He said his father has lived in the city for 70 years and had never seen anything like it. Grosjean’s son Arthur told CNN the course of the floods very quickly, leaving only destruction behind.

“Fortunately I do not live there, but it is my mother’s business and there is nothing here. We hope to be able to repair quickly, but we do not know how,” he said, while helping to clean up.

“The situation is changing minute by minute and remains extremely critical in many places,” Prime Minister Alexander De Croo told a news conference on Friday. “The victims are the priority, the rescue is the priority and the attention. All possible means are mobilized,” he added, announcing that Belgium will celebrate a national day of mourning for the victims of the floods on Tuesday.

Meanwhile, in the Netherlands, Dutch officials ordered the evacuation of 10,000 people in the municipality of Venlo, where the Maas river rose faster than expected. High tide is expected to last until Sunday night.

Officials fear more dams will break and are keeping a close eye on reservoirs in the region. A hospital in the region with 200 patients was evacuated on Friday.

The devastating floods came after large swaths of Western Europe experienced historic levels of rainfall; the amount that would fall in more than a month fell in 24 hours.

Cologne, in North Rhine-Westphalia, recorded 154 millimeters of rain in the 24 hours through Thursday morning, which is almost double its July monthly average of 87 millimeters. In the Ahrweiler district, 207 millimeters of rain fell in just nine hours, according to the European severe weather database.

While it’s too early for scientists to say what role climate change has played in causing this particular flood, extreme rainfall events like those seen in Western Europe this week are becoming more common and more severe.

Germany’s North Rhine-Westphalia Prime Minister Armin Laschet, who is also the Conservatives’ candidate to succeed Chancellor Angela Merkel in the upcoming federal elections, said the floods in his state were “a catastrophe of historic proportions. “, making an appeal to the world. accelerate their efforts to mitigate and adapt to climate change.

“The floods have literally pulled the rug out from under people’s feet,” Laschet said.

“We will face such events again and again, and that means that we need to accelerate climate protection measures, at the European, federal and global level, because climate change is not limited to a single state,” he said.

While the total amount of rain may not change throughout the year in a given location, more rain is expected to fall in shorter bursts, which will tend to increase the frequency of flooding.

This was pointed out by scientists from the European Environment Agency, who said that “the projected increase in the frequency and intensity of heavy rainfall over large parts of Europe may increase the likelihood of flash floods, which pose the greatest risk of death.”

A 2016 flood in Western Europe that killed 18 people in Germany, France, Romania and Belgium, was analyzed by a scientist to see if climate change played a role in the floods. They found that warmer weather made floods 80-90% more likely to occur than in the past before man-made climate change.