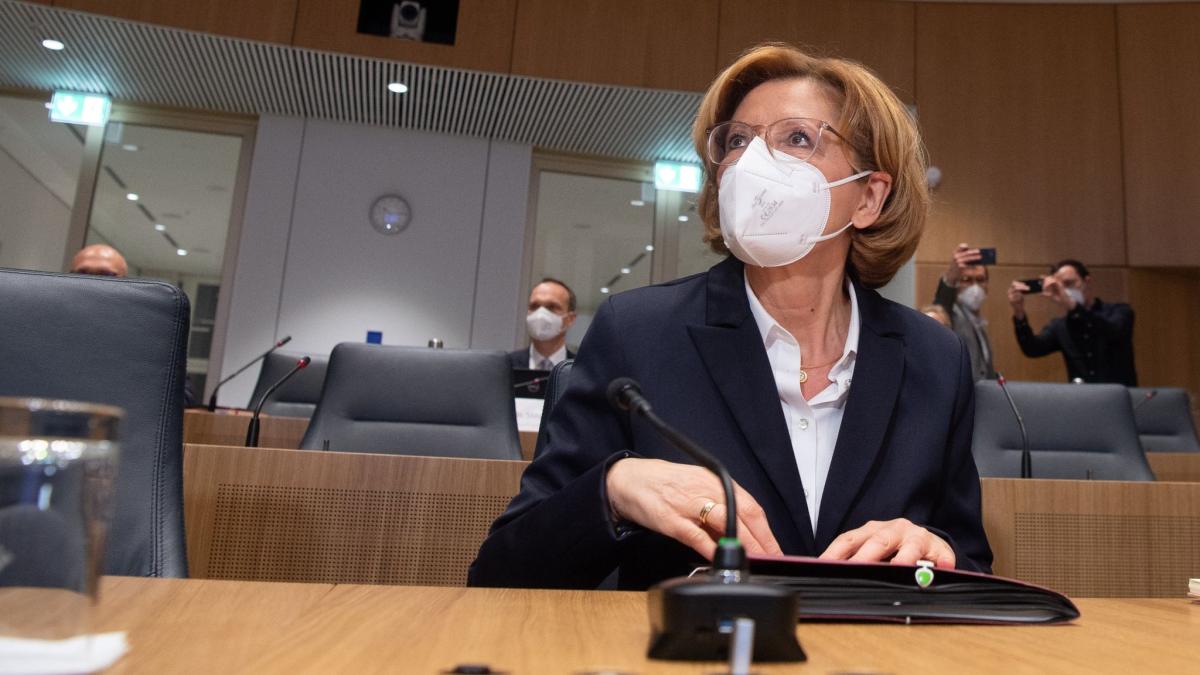 Flood disaster in the Ahr valley: Malu Dreyer on the witness stand – Spiegel was “tense” at the time

Prime Minister Malu Dreyer (SPD) was the seventh witness to a marathon session in which the flood disaster in the Ahr Valley is being processed. The first impressions on site were “terrible,” she said. Dreyer later commented on the role played by the Environment Minister at the time, Spiegel.

MThe head of government has to wait more than two hours until she is called as a witness in the committee of inquiry into the flood disaster in the Ahr valley. Serious and composed, Malu Dreyer (SPD) sat down on Friday evening in an unfamiliar place – where the CDU parliamentary group leaders usually interject in debates.

“They were apocalyptic images,” says the prime minister about her first explorations on site. “They were terrible impressions, they are impressions that I will never shake off.” The flood hit Rhineland-Palatinate to the core. “The flood disaster of July 14th and 15th is a turning point in our country,” said Dreyer. Now it is the political responsibility of the state government to draw the right conclusions.

Dreyer describes the investigative committee’s close cooperation with Interior Minister Roger Lewentz (SPD), who testifies before her. In the survey, however, the exchange with the then Environment Minister Anne Spiegel (Greens), who was responsible for flood protection, also plays a major role. “Did you fear that Ms. Spiegel was not sufficiently informed?” asks the committee chairman Martin Haller (SPD). “I’ve seen her tense,” Dreyer replies. But this is understandable in the event of an impending flood.

Dreyer is the seventh witness of a marathon session examining the behavior of government officials on July 14 and 15, 2021, down to the minute. On March 11, Minister Spiegel had to answer questions from the committee members. Since then, hardly a day has gone by without opposition politicians calling for the resignation of the current Federal Minister for Family Affairs. This time the focus is primarily on the Ministry of the Interior, which is responsible not only for the police but also for the municipalities.

A department head and the then office manager of Interior Minister Lewentz state that they assessed the situation on July 14 until late in the evening as a heavy rain event, which had previously occurred more and more frequently. The worried look was also directed more towards the districts in the Eifel. A special situation in the Ahr valley was initially not recognizable.

Was there no reason for the Ministry of the Interior to take action that evening with its own measures? That’s the question asked by committee chairman Haller. “There was no reason to say: We have to be extremely vigilant because a catastrophe is imminent,” said State Secretary Randolf Stich (SPD). “We couldn’t have the picture.” According to the information available to him, the responsible civil protection was active on site, with the support of the national supervisory and service directorate (ADD).

At this hour, Interior Minister Lewentz was at the Technical Operations Center for the Ahrweiler district to send the signal that he could be contacted on site. “My impression was: work is done calmly and with concentration,” says the SPD politician. At the time, however, he did not know that District Administrator Jürgen Pföhler (CDU) had handed over the management of operations to the district’s fire and disaster control inspector (BKI).

Did Lewentz think of contacting Minister Spiegel directly on the night of the flood? The minister denies this. He always had “a very good and collegial relationship” with her. But the flood data from the State Office for the Environment, which is under the Ministry of the Environment, is intended directly for the technical operations management of the districts – and there they can be correctly evaluated with the respective local knowledge.

The CDU parliamentary group has already announced that Prime Minister Dreyer and Interior Minister Lewentz will be invited to the committee of inquiry again. Her chairman on the committee, Dirk Herber, explained that the questioning of Dreyer and Lewentz had shown that the state government had failed during the hours of the flood disaster. Dreyer did not have her ministries under control on the evening of the flood, and there was no exchange or coordination between Lewentz and Spiegel – “rather, it went blind through the disaster,” said Herber on Saturday.

The committee now has an Easter break until the end of April. No one can say when the investigation will be completed. What happened in July 2021 is not in the past. “Not a day goes by,” says Dreyer, “when we don’t deal with the flood disaster.”

See also  "It's like there's a Benfica-Sporting match almost every day." Residents of Santos, in Lisbon, ask for bars to close early