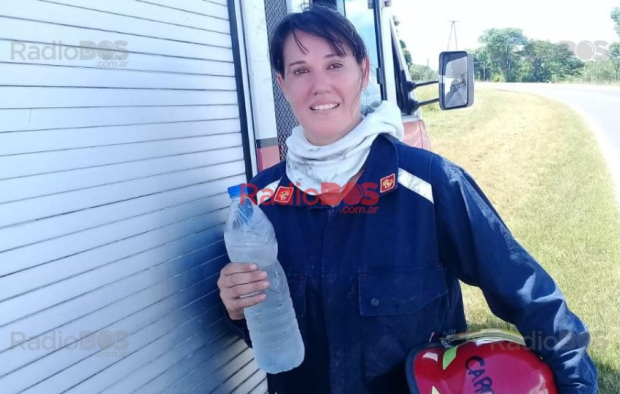 Firefighter from Corrientes needs $300,000 to undergo surgery and improve her quality of life

It has a cost of 300 thousand pesos, her colleagues from the San Luis del Palmar barracks, where she works, started a campaign to get the money.

Carolina Rodríguez recounted: “what I had to live through is difficult, I am a secondary school teacher, a psychology teacher, I work in Lomas de Galarza, 78 km from San Luis del Palmar, returning one day we hit an animal, which shocked me me, I had a spinal injury that at that time was not serious”.

Likewise, the volunteer firefighter commented: “a pathology caused me over time, and now it is much more serious, it causes me a lot of pain, I already have an important surgery that they did to me at the end of 2019 because I could no longer walk and I could not move a hand, in 2020, I had a fairly regular rehabilitation due to the pandemic “.

In turn, the teacher stated: “I tried many treatments with my doctors, and now I have to have a fixation surgery, because I have a mechanical pathology that causes me a lot of pain, I can’t wait much longer, because of the continuous pain that generate”.

At the same time, Carolina described: “the Firefighters Association of San Luis del Palmar started this solidarity campaign, which had a great impact, which I did not expect and personally it is difficult for me, because I am a very reserved person”.

And he pointed out: “I have permanent treatments, they are long and painful, it makes it difficult for me to stand and sit, sometimes I can walk a little or I move, the only thing that calms me is with rest or painkillers.”

“I have lost everything, I have a tenured position as a teacher, I had other hours, but I lost all possibility of competing, I lost the possibility of everything, that is why I would love to be able to return to the classroom, that is my great goal,” he remarked.

In addition, the volunteer firefighter reported: “The first surgery was to be able to walk because my legs were immobilized, I was able to improve with this, but the pain is present and now the surgery aims to reduce or eliminate the pain as much as possible, when I I move it hurts, that’s my problem”. And she added: “I give private classes, virtual workshops, that’s how I go, I don’t have any assistance, only help from family and friends.”

About the operation, he said: “part of the cost of the surgery is covered by social work, the prosthesis too, but now I have to do it in a private clinic, with special devices, with a great team, more or less I get 130 or 150 thousand pesos, and the rest is for surgery and rehabilitation expenses, in total it would be 300 thousand pesos”.

And he pointed out: “With the campaign we already have almost half the money, on May 19 it would be the surgery in principle, that’s why we dropped the campaign because I couldn’t find a way to get the money.”

Referring to her work as a firefighter, Carolina highlighted: “since I was born I am a firefighter, since I was a girl I played at being a rescuer, I was always an athlete, studious, restless, when I had the opportunity to join, because of my father who was the founder from the barracks, I joined because I wanted to help, to do something else, and that has been with me for 21 years of my life”. Finally, the teacher stated: “my son Gabriel, 18 years old, is already a firefighter too, he entered as soon as he turned 18.”