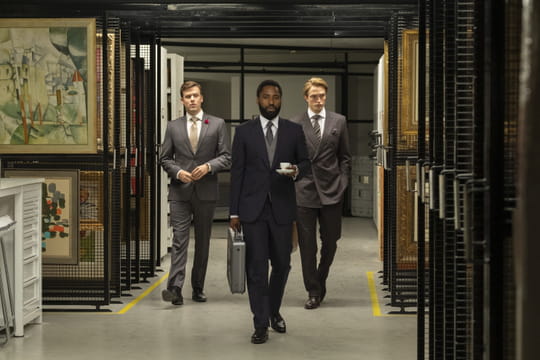 TENET- Warner Bros has decided to release Tenet, Christopher Nolan’s latest film, in France and 70 other countries at the end of August.

[Mis à jour le 28 juillet 2020 à 9h58] Only a few more weeks to wait before discovering the mysterious Tenet. While its release date has been postponed several times, Warner Bros. Pictures has announced that Christopher Nolan’s film will be released in France very soon. The summer blockbuster, awaited as the Messiah by cinemas and spectators, will be released on 26 august 2020 in 70 countries, including France. As a reminder, Tenet was successively postponed because cinemas are not yet open everywhere in the world. This is the case of the United States, which has experienced an increase in the number of coronavirus cases in recent weeks: the film should be able to be released in some American cities on September 3. However, no release is currently planned in China, where health restrictions do not allow the screening of such a long film (2:30).

This choice to release Tenet only in certain countries is unprecedented in the film industry. Such a decision also raises specific issues for Warner Bros., in particular the risk of massive piracy, which would be catastrophic for both the studio and the exhibitors. But as Toby Emmerich, president of Warner Studios, explained, Tenet is not “treated like a traditional global release”. If Tenet’s release turns out to be successful, it could have ramifications for the release strategies of the year’s blockbusters, many of which have been pushed back to a later date, or even 2021.

Check out the latest Tenet trailer

It is always difficult to summarize precisely a Christopher Nolan film before its theatrical release. Tenet is no exception to the rule, and the first images unveiled only allow us to capture the tone and the first crumbs of the plot. We only know that, as with the rest of his work, the filmmaker will continue his reflection on temporality and space. In the new trailer released on May 21, 2020, we learn that the protagonist played by John David Washington will not use time travel to prevent a third world war, as we could think until then: Christopher Nolan introduces in this trailer the concept of “inversion of time”, which would allow “to communicate with the future”, without revealing for all that its exact functioning. These first images also allow to discover the duo formed by John David Washington and Robert Pattinson in action, Tenet promising explosive action scenes.

It was in December that Warner Bros. unveiled the very first trailer for Tenet, the new thriller directed by Christopher Nolan. Although it knowingly maintains the confusion about its synopsis and its universe, the film has unveiled some images which allow to realize that Tenet is closer to Inception than to Dunkirk with in particular a representation of time travel. . Below, check out the first trailer for Tenet.

Synopsis de Tenet – As is often the case with Christopher Nolan’s thrillers, it is not necessarily easy to understand what it is until you have seen the film. Tenet takes place in the world of international espionage. Resurrected after his death during a psychological test, an agent must now do his best to avoid World War III. For this, he will use the technique of “time inversion”.

For the French-speaking public, the word “tenet” which gives its title to Christopher Nolan’s next film is completely foreign and does not mean much. And yet, if we look at its definition in the English Merriam-Webster dictionary, we discover that “tenet” is a principle, belief or doctrine generally considered to be true and particularly by members of a group, of a group. movement or profession. In the movie Tenet, as the first trailer revealed, the simple word “tenet” spoken to the right people is supposed to open doors hitherto closed to the main character. It would therefore be a sort of password shared in the upper echelons of international espionage. Another interesting fact, the word “tenet” is a palindrome, that is to say that it is a word which is read in the same way back and to the place, in perfect symmetry. The choice of this word certainly did not come by chance because, when you see the trailer for the film and its exploration of time travel, symmetry seems to hold a big place in Christopher Nolan’s feature film.

Headliner of Tenet, the new film by Christopher Nolan, John David Washington is the son of Denzel Washington. We saw it previously in Spike Lee’s latest film: BlacKkKlansman. In Tenet, he plays in particular Robert Pattinson (Twilight, Cosmopolis) who will soon play Bruce Wayne in Matt Reeves’ Batman. The filmmaker hires again Michael Caine, one of his favorite actors seen in particular in Inception and his Batman trilogy, as well as Kenneth Branagh whom he directed in Dunkirk. The actress Clémence Poésy, interpreter of Fleur Delacour in the Harry Potter saga, but also seen in the Tunnel and Genius series, is also present in the cast of Tenet.

Tenet – August 26 in the cinema releases