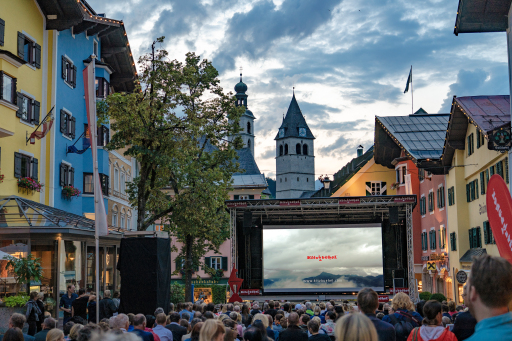 The 9th Kitzbühel Film Festival is a meeting place for filmmakers, industry representatives and cinema enthusiasts.

Kitzbuhel (OTS) – With the Austrian premiere of Hans Steinbichler’s tragic comedy “Hannes”, the 9th Kitzbühel Film Festival opened on Tuesday, August 24th, in the presence of the director, author and team at the Kitzbühel Film Theater. Open-air screenings, classic screenings, drive-in cinema and a performance in the highest cinema in Europe will take place until August 29th.

This year’s competition with around 50 feature, documentary and short films, which have been nominated by a jury of around 800 submissions, is once again dedicated to the work of young Austrian and international directors. “The selected contributions tell a lot about the time in which we live and the topics that deeply affect us apart from Corona,” says Film Festival Kitzbühel Managing Director Michael Reisch.

Kitzbühel Tourism Managing Director Dr. Viktoria Veider-Walser welcomes the ninth edition of this top-class event: “A high-quality cultural program at extraordinary locations, the mix of established filmmakers and young up-and-coming artists, Austrian and international works and an innovative supporting program are just some of the success factors of the film festival. We are particularly proud that this initiative by the young people of Kitzbühel has enjoyed such lasting success. As part of this event, we can look forward to high-quality entertainment at special places here in Kitzbühel. “

In addition to the popular drive-in cinema, which this year will provide entertainment with the US musical adaptation of Adam Shankman’s “Rock of Ages” on Thursday, August 26th at the Hahnenkamm car park, the finish area of ​​the legendary Streif will be an open-air cinema for the first time this year. The Austrian premiere of the new feature film “Je suis Karl” by director Christian Schwochow, which celebrated its world premiere at the Berlinale, can be seen on Wednesday. According to the script of this year’s honorary award winner Felix Mitterer, “Andreas Hofer – The Freedom of the Eagle” will be shown on Saturday, August 28th in the cinema near the Zielhaus.

Traditionally, the gondola takes the gondola up to the Kitzbüheler Horn on Friday evening, when “The Boandlkramer and Eternal Love”, the last feature film by the filmmaker Joseph Vilsmaier, member of the advisory board and first honorary award winner of the Kitzbühel Film Festival, is shown exclusively in the highest cinema in Europe Screen is played.

You can find all information about the Kitzbühel Film Festival at events.kitzbuehel.com