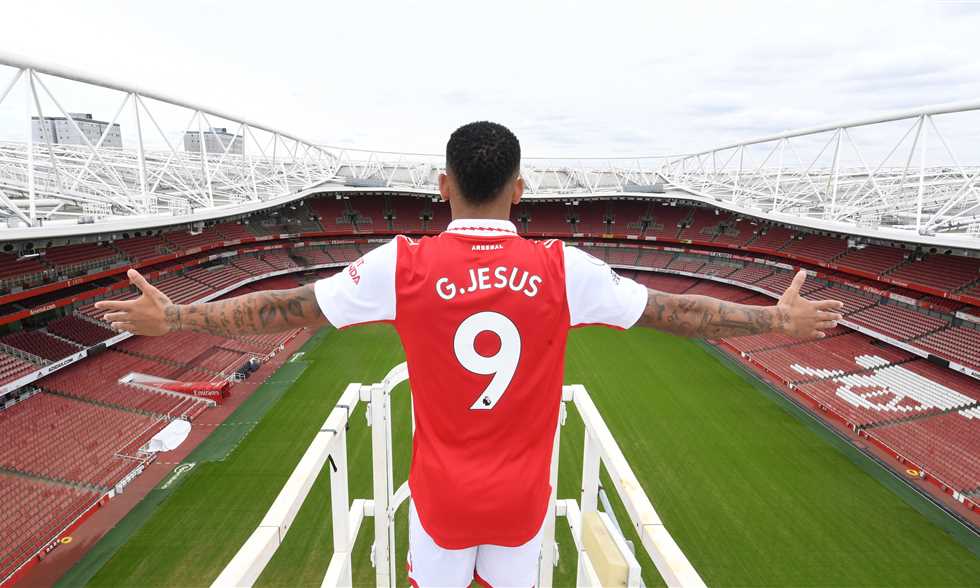 Arsenal have announced the signing of Gabriel Jesus from Manchester City in the summer transfer market.

Arsenal explained that the Brazilian international striker signed a long-term contract, without disclosing its duration.

Fabricio Romano, a Sky journalist, said the deal was worth 45 million pounds.

“I’m very excited,” said Arsenal manager Mikel Arteta. “The club has done a tremendous job to bring in a player of this size. I know Gabriel well on a personal level, and we know him well in general from his time in the Premier League and the successes he’s had here.”

“We have been aiming to consolidate this position for a long time and now we got the player we wanted, I am very happy,” the Spanish coach added.

And Arteta worked on a daily basis with Jesus before, when the Spaniard was assistant to Pep Guardiola at Manchester City.

Arsenal sporting director Edu also said: “We are happy to secure the deal for Jesus, everyone knows the football he offers and the abilities that Jesus possesses.”

“Gabriel is a player that has impressed us for a long time. He is 25 years old and is a key player in the Brazil national team and has proven his ability to play at a high level,” Ido added.

He concluded: “We are looking forward to seeing him join his teammates before the start of the new season. We all welcome Gabriel to Arsenal.”

Arsenal announced that Jesus will wear the number 9 shirt carried by former captain Alexandre Lacazette, who moved to Olympique Lyonnais several weeks ago.

For his part, Jesus published a farewell message to Manchester City, in which he explained that the azure blue fulfilled his dream of playing in Europe.

Jesus (25 years old) started his career in Palmeiras and led him to win the 2016 Brazilian League and the 2015 Brasil Cup.

Jesus moved to Manchester City in 2017, for 32 million euros at the time.

Jesus played with Manchester City in 5 years 233 games, during which he scored 95 goals and assisted 46 others.

Jesus won the Premier League 4 times with Manchester City, the FA Cup once, the League Cup 3 times, the Charity Shield Cup twice, and reached the 2021 Champions League final with him.

Jesus has 56 international matches for the Brazilian national team, scoring 19 goals, and participated in the coronation of samba dancers in the Copa America 2019. He was also in the team that won the first Olympic gold medal for Brazil in 2016.

Arsenal turned to Jesus to replace Lacazette and Pierre-Emerick Aubameyang.

Jesus is the fourth player to join Arsenal in the summer transfer market after compatriot Marquinhos from Sao Paulo, Portuguese Fabio Vieira from Porto, and American Matt Turner from New England Revolution.

Arsenal finished fifth in the English Premier League last season, and participates in the European League in the new season.

A surprise about the mass attendance of the Egyptian League

How Egypt qualifies for the World Basketball Championship

Determine the location of the African Super

An awaited decision regarding the African Nations qualifiers