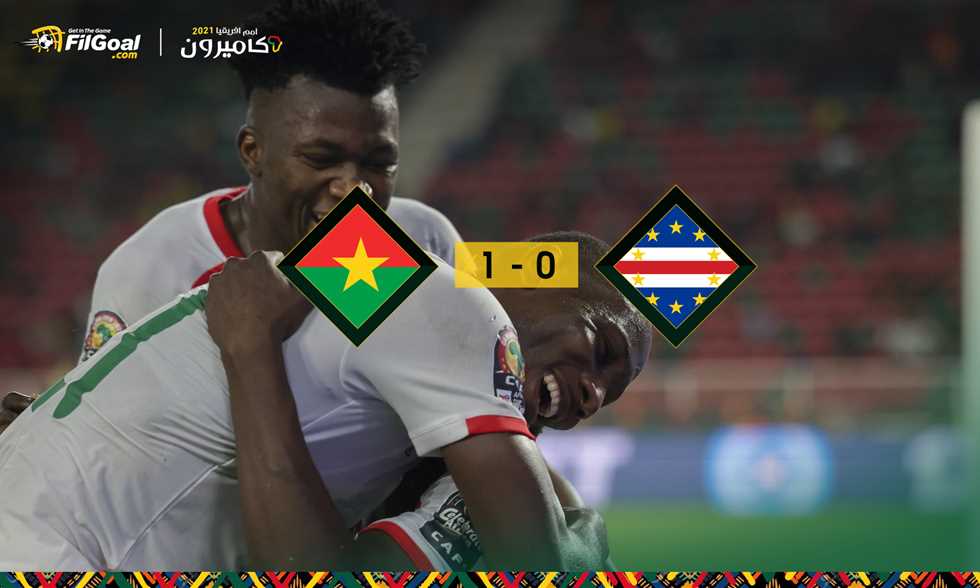 Burkina Faso beat Cape Verde 1-0 in the second match of the second round of Group A of the 2021 Africa Cup of Nations.

The tournament returned to its usual habits, in the first round of 12 matches, which ended 9 with a score of 1-0, becoming the tenth match that ended with that result.

Cameroon had booked the first round of 16 tickets by sweeping Ethiopia 4-1, the biggest result in the tournament so far. (see details)

The Burkina Faso national team won its eighth victory in the history of its participation in the Nations Cup in 43 matches in 11 editions.

Cap Verde lost its second defeat in the tournament’s history, in its ninth match.

After the end of the second round, the standings of the first group became Cameroon in the lead with 6 points, while the Burkinabe horses with 3 points jumped to the second place, and Cape Verde fell to third place with the same balance, and Ethiopia is at the bottom of the standings without credit.

The match witnessed the appearance of the first Egyptian referee, led by Amin Omar, who led the match from the field in the current version, after Mahmoud Al-Banna was present as the fourth referee in the opening match.

The first appearance of the Egyptian arbitration in the African Nations .. Amin Omar leads the match between Cape Verde and Burkina Faso as referees ⚽️ pic.twitter.com/J88oebADId

Burkina Faso made 2 changes, while Cape Verde made 3 changes.

Two changes came from Burkina, with the participation of Edmond Tabsoba and Hassani Pande, in place of Patrick Mallo and Bertrand Traore.

While Cape Verde made 3 changes from the Ethiopia match, the attacking trio remained the same.

The first half hour of the match were the goalkeepers.

Cap Verde goalkeeper Fauzinha shone and pushed it away with his fist from Edmund Tapsoba’s free kick to turn it into a corner in the 13th minute.

Fouzinia continued his brilliance and prevented Hassani Bandi from scoring the first goal in the 26th minute.

With a long, fast ball, Julio Tavarez, who received the ball inside the penalty area, almost scored the first for Cap Verde, but Hervey Kofi, the horse goalkeeper, in the 30th minute.

The brilliance of the guards ended there.

Issa Kabore’s cross in the 39th minute from the right side passed from Fouzinia to be inhabited by Bandi with his chest on the bird in the net, announcing the first and only goal of the meeting.

In the second half, Cap Verde captain Stupira’s header passed over the Burkinabe bar in the 60th minute.

Cape Verde’s pressure almost paid off, but Gary Rodriguez’s shot was brilliantly kept away from his goal by Kofi.

The following minutes did not witness any real opportunities between the two teams, as the Cap Verde players tried to snatch the tie, but their balls did not find the net, to collect the three points for the horses.