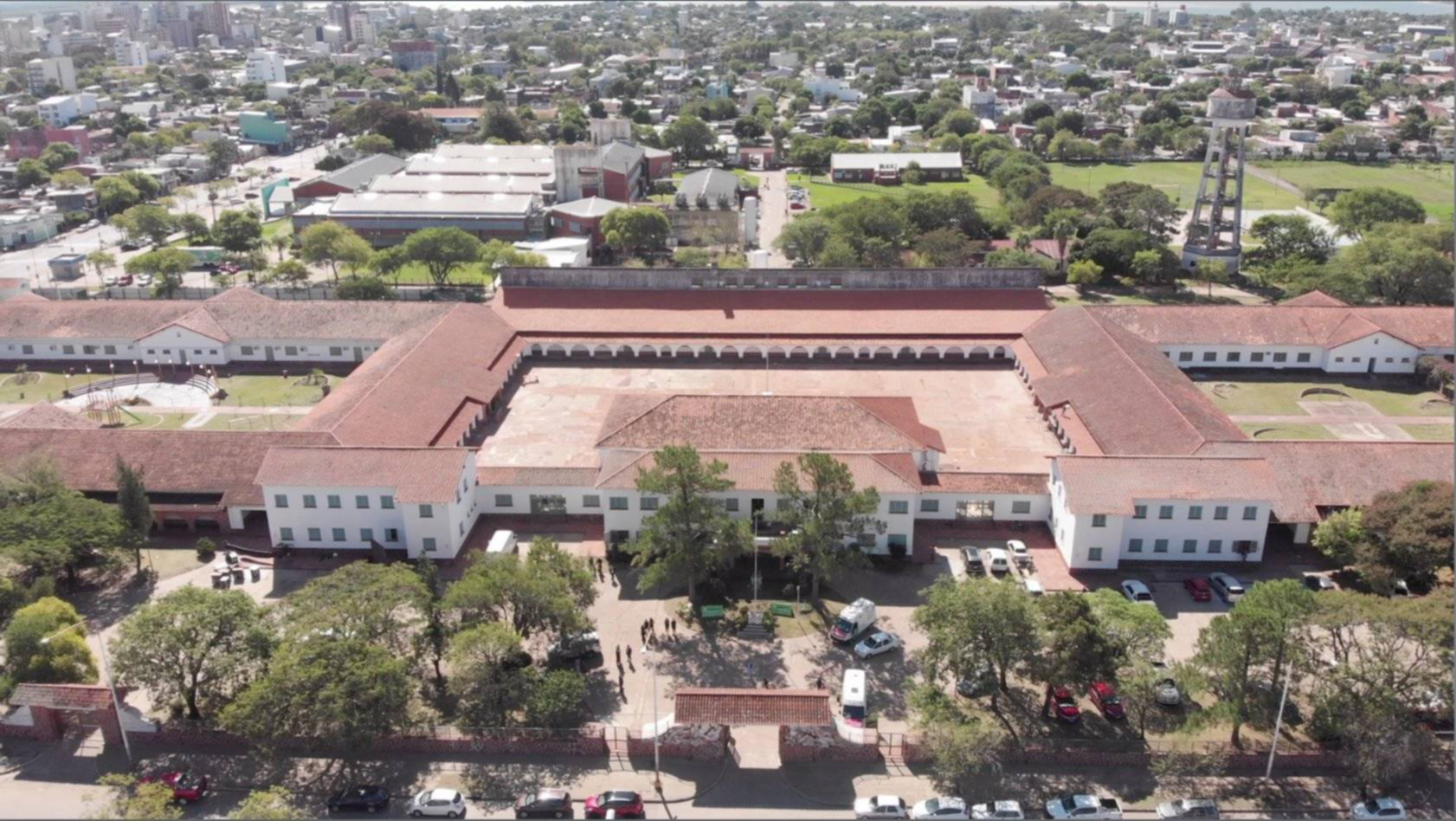 Field Hospital, a unique case within the health responses to the pandemic – General Info

With more than a year and a half of operation, the Corrientes Field Hospital represented a unique case in the country within the responses in terms of infrastructure and health services to contain the COVID-19 pandemic, concentrating three levels of care in the same establishment. This is how hospital architecture professionals review it in the latest edition of the magazine “ADNea” of the Faculty of Architecture and Urbanism of the UNNE.

The Magazine “Arquitectura y Diseño del Nordeste Argentino – ADNea” is a publication of the Faculty of Architecture and Urbanism of the UNNE that covers the different academic areas and thematic fields of action of the faculty’s careers, also promoting the participation of professionals from the whole region.

In its latest edition, Nº9, “ADNea” dedicates an article and its cover to the project of the Field Hospital of the city of Corrientes, as an emblematic case among the responses of the health system to the pandemic.

“The Field Hospital held in the city of Corrientes is a unique case within the responses given to these situations of expansion of capacities implemented by health systems, which we understand deserve a particular look in its conformation as a valid alternative, since it combines the three stages of the disease in a single facility and centralizes care in a single building throughout the province ”, the authors of the publication maintain.

They recall that the successful implementation of this field hospital required its inclusion within a rational strategic and operational planning of human, physical and technical resources, with synchronization in the stages of project, construction, equipment logistics, service logistics , organization of human resources and the training of personnel who were affected by the new equipment, plus the integration of the different actors and sectors involved.

They explained that, before the onset of the pandemic, health buildings worldwide were overwhelmed in their capacity as a result of the massive infections of COVID – 19 in all affected countries.

The alternatives for expanding the capacities of care beds were multiple in the different stages of the disease, ranging from rapid assembly facilities, extensions of existing hospitals, occupation of spaces with large lights such as sports clubs or halls for fairgrounds, among others.

In this context, the province of Corrientes had to make decisions that imply alleviating the problem by opting for different solutions to face this problem. Thus, it was chosen, as one of them, in the construction of a Field Hospital for treatment of patients affected by the SARS-CoV2 virus.

In this way, the Field Hospital distinguished itself by transforming a school building into a health center in a short period of time that focused attention to the disease, with all stages of care, something that was not observed in the country.

Along these lines, the architects Gómez and Ortiz Almirón review that the challenge was to recondition and readjust an educational establishment built in the government of President Juan Domingo Perón, to turn it into a building equipped for health, taking into account not only the internal equipment but also the physical infrastructure of the place and the context of its location.

They detailed that within the patients infected by Covid-19, there are different types of critical, moderate and mild patients.

In the country, the different provinces and the National State opted to build field hospitals, expand existing health centers, recondition places for other purposes for health care, among other actions to strengthen the capacity of the health system.

Faced with the different alternatives, in Corrientes a Crisis Committee was formed made up of technical teams, health and security personnel, officials, etc. where they established the need to have a Provincial Field Hospital, which centralizes the cases of the Province in the city of Corrientes.

After evaluating different locations in the city of Corrientes, the Crisis Committee finally decided on the refurbishment of the “Presidente Juan Domingo Perón” Home School strategically located at the intersection of Avenida Independencia and Av. Artigas, with wide accesses to the property, also counting with a building state in good condition.

To this end, all the organizations were called to carry out a project for the Reconversion of the Home-School into a Field Hospital, made up of the Ministries of Health, Public Works, and Education, among others.

Thus, the Hospital Architecture Unit of the Ministry of Public Works was in charge of the planning and projects of the new spaces adapted to medical care with a clearly infectious profile.

Technical teams from the Hospital Architecture Unit, Technicians from Construction Companies, specialists in computer systems, doctors, nurses, service personnel, specialists in electrical installations, thermo mechanics, medicinal gases, among others, were formed. Only in this way were the proposed objectives of having the necessary areas ready to start the occupation with the patients.

See also  Hope for a better vaccine: Resistant to Corona

DETAILS OF THE CORRIENTES HOSPITAL

The Field Hospital was designed in stages of habilitation depending on the emergence of cases in the province and in the capital of Corrientes. In the first stage, work was done on the sector called “A”, to the west, located on Avenida Artigas.

In this sector there are Intensive Therapy areas with 120 beds with respirators and multiparametric monitors, an Operating Room, a Delivery Room, an Inpatient Area with 200 beds, being able to increase the number of beds if the needs require it.

On the other hand, the occupation of the second sector called “B” was expanded to 320 beds, locating other activities related to the Hospital such as emergencies, doctors’ area, hospitalization areas for mild patients, areas for post-covid patients, laboratories, other tomography room, among other necessary spaces. It is prepared to house up to 1,000 beds in the event of a major contingency.

Thus, the start-up of the operation of the Field Hospital began in March 2020 and the inauguration took place in May of that year.

In addition to the functional distribution, the building has been provided with the necessary facilities that complement each space for the performance of its functions, they range from hot and cold water installations throughout the building such as electrical, sewage, fire and not least the installation of medicinal gases locating the oxygen tank near the emergency area.

After the first stage of the field hospital, it already had approximately 180 hospital beds for internment and 120 in what corresponds to Intensive Therapy, with a total of 300 starting its operation.

“The success of the implementation of this field hospital has required, its inclusion within a rational strategic and operational planning to the resources, a synchronization in the stages of project, construction, equipment logistics, service logistics, organization of the human resources and the training of personnel who are affected by the new equipment, plus the integration of the different actors and sectors involved ”reiterate the Arq. Gómez and Ortiz Almirón.

FROM CAMPAIGN HOSPITAL TO HOSPITAL WITH MONOVALENT PROFILE

The authors of the publication highlight that the care, diagnosis and treatment of COVID patients as basic issues for the initial approach of the Campaña Hospital “has worked without a doubt”, but as more and more were added complexities to the health effector, it could be considered that the purpose of the creation of a field hospital was varying until currently finding a Hospital with a Monovalent type character due to certain issues:

On the one hand, a monovalent hospital is characterized by treating a single specialty, being the case of the Province of Corrientes, infections such as COVID. For the future, on the one hand, it is intended to establish a post-covid care sector while on the other an area of ​​hospitalization and necessary care as required, but always for individuals who present symptoms of certain characteristics compatible with that of the Hospital.

In addition, the implantation where the Field Hospital is located, close to the “Juan Pablo II” Pediatric Hospital, but also to a site located behind it destined for the future Central Laboratory of the Province and the location within expressways such as Av. April 3, Av. Artigas and Av. Chacabuco, generate in the area a large Health Pole that allows concentrating several establishments with different functions in health matters.

Meanwhile, the construction of a new educational establishment on another property by the Government of the province to restore the old operation of the school before the conditioning of the infrastructure for the Campaign Hospital “Hogar Escuela” gives an idea of ​​the permanence of the Hospital over time, so it ceases to have the “campaign” characteristics that it possesses as facilities that are set up and erected in a certain period.

Finally, it is highlighted that the formation of a team (staff) characterized by a Directorate and different Functional Units (bosses and deputy bosses) within the pyramidal organization consolidates a solid management scheme within the structure of a hospital.

“The future presents different visions about the final destination of this building re-adaptation carried out from a building for educational purposes to another for health provision. The burden of functional modifications and facilities of all kinds makes us argue that, going forward while the pandemic lasts, it will remain a new health effector in the province of Corrientes ”conclude the architects Gustavo Gómez and Alan Michel Ortiz Almirón, authors of the publication.