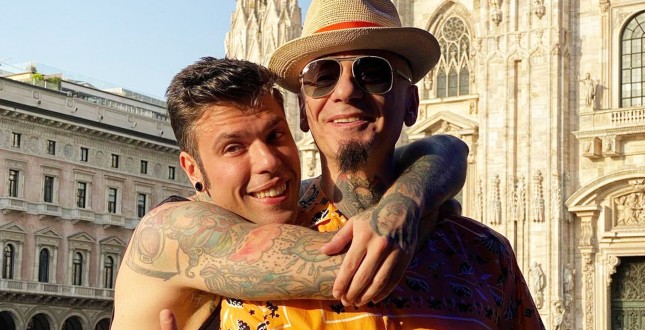 Fedez and the Milan concert: Chiara Ferragni and her friendship with J-Ax. The photos

So many emotions and as many performances for Love Mi, the benefit concert organized by the rapper in Piazza Duomo in Milan. And among 20 thousand spectators there was a very special one …

A great concert to raise funds for a good cause, over 20 thousand people who filled the Piazza del Duomo in Milan for six hours with live music. And on the stage Fedez, promoter of the event, got excited thinking about the path that brought him here tonight: “Thanks to the doctors who saved my life, I didn’t think I would be able to play again. And thanks to my wife Chiara, the person who has been closest to me ”. Love was also an opportunity to make peace with an old friend: J-Ax. After years of coldness, the two are finally back to perform together and excite the public. – photo | video 1 | video 2

FRIENDSHIP FOUND – The most awaited moment is the final one: after more than five hours of music, Fedez performs with Tanatai and Mara Sattei in the summer hit The sweet life and then calls J-Ax on stage. The rapper with whom he had played at San Siro before leaving after a furious argument. Piazza Duomo is an opportunity to see the two artists on stage again and celebrate peace and friendship: after Federico’s illness it is no longer time for ancient disagreements. And the couple can perform in their best-known singles: I would like but not place, Italian and many others.

See also  Space Jam: The Next Generation, Review of the Film with LeBron James

Fedez, in the studio to record three days before pancreatic surgery – guard

AMONG THE PUBLIC – At her husband’s side, in the harsh months of his illness, and under the stage, is Chiara Ferragni. The digital entrepreneur showed herself to the cameras as she danced in amusement throughout the evening. He dedicates his most tender dedication to her: “I thank the most important person who was close to me, my wife. I love you so much ”, Fedez said excitedly.

Fedez and J-Ax, the concert rehearsals are (already) explosive – guard

MILANESI – The stars who performed on stage come from every corner of the city and they also bring memories and their experience with them. Like Ghali who says: “I remember when Fedez and I used to pass this way. We went from the columns to San Babila together. The concerts here however did not represent us and then we went to drink. But this concert represents us ”. But also Tananai who never would have imagined on such an important stage: “I hope to do this job for my whole life”, he says moved.

A GOOD CAUSE – Many sponsors involved, with the organization of Doom Entertainment, the Fedez company and the production of Vivo Concerti, and a goal of two million euros to be donated to the non-profit organization. The funds raised thanks to the solidarity number 45595 will be donated by the Fedez ETS Foundation to TOG – TOGETHER TO GO, a non-profit center of excellence in the rehabilitation of children suffering from complex neurological diseases (in particular infantile cerebral palsy and genetic syndromes with mental retardation).