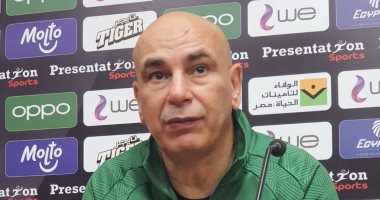 Hossam Hassan, technical director of the first football team at Al-Ittihad Club of Alexandria, decided not to give his players a leave of group training in preparation for facing Al-Masry Al-Port Said next Sunday, January 16, in the second round of the first group of the League Cup.

The players who played the Pyramids match are performing a hospital exercise today, while the rest are participating in group training in a normal way so that Hossam Hassan is assured of the readiness of all elements to face the Port Said team.

The Alexandrian Al-Ittihad team beat its Pyramids team by two goals against a goal in the match that brought the two teams together at the Air Defense Stadium in the framework of the matches of the first round of the first group of the League Cup for professional clubs .

The goals for the Alexandrian team were scored by Ahmed Adel “Messi” in the 15th minute, while the Ivorian Mobololo strengthened his team’s lead in the 57th minute, while the goal to reduce the difference for the Pyramids team came through the player Mahmoud Saber in the 75th minute. .

With this result, the Alexandrian Al-Ittihad team achieves the first three points in the first group of the League of Professional Clubs Cup, while Pyramids loses the standings table for not collecting points. .