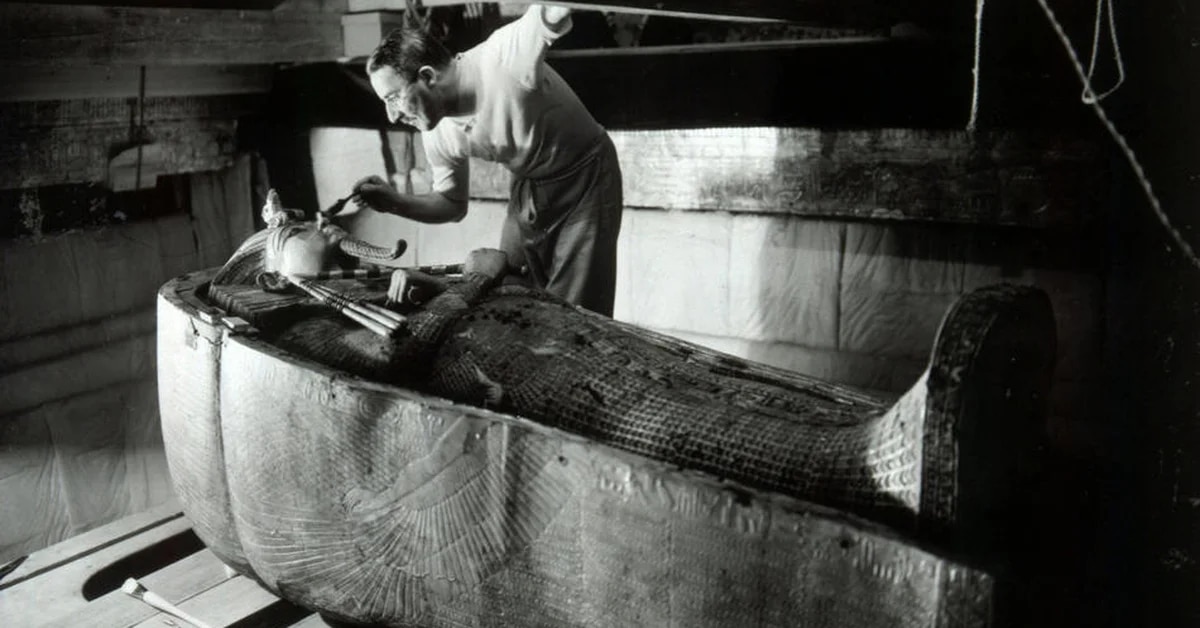 Howard Carter with the tomb of Tukantamon

On the centenary of the discovery of the pharaoh’s tomb Tutankhamun in Egypt, by the British archaeologist Howard Carteran unpublished letter confirms the suspicion of the removal of pieces of the archaeological site before the official opening of the nearly intact 3,300-year-old tomb.

In November 1922, after 15 years of excavations, Carter (1874-1939) discovered the almost intact tomb of the young king Tutankhamun (1336-1327 BC) in the Valley of the Kings, which was one of the most important archaeological discoveries. made.

For many years, Carter was suspected of having removed part of the treasures before the vault was officially opened, without this being proven. The British philologist Alan Gardinerwho was part of the excavation team hired to translate the hieroglyphs, revealed in a 1934 letter to Carter the theft of some objects from the tomb, the newspaper reported. ABC.

Carter himself gave Gardiner a “whm amulet” used as an offering to the dead, to assure him that the object would not come from the grave. But Gardiner has the expert opinion of Rex EngelbachBritish director of the Egyptian Museum in Cairo, who confirmed the origin of the amulet from the tomb, as it coincided with other copies made with the same shape.

“The whm amulet you showed me was undoubtedly stolen from Tutankhamun’s tomb,” Gardiner wrote to Carter. “I am very sorry that I was put in such an awkward position,” to which he adds: “Of course I did not tell Engelbach that I got the amulet from you,” the British media reported. The Observer.

On the other hand, these unpublished letters which are in a private collection will be published in a book by the University of Oxford under the title of Tutankhamun and the tomb that changed the worldof the Egyptologist Bob Brier from Long Island University.

Sarcophagus of Pharaoh Tutankhamun in the Valley of the Kings, discovered on 4 November 1922 by British archaeologist Howard Carter. EFE/yv

Carter, who had the financial sponsorship of Lord Carnarvon, in the decade following the discovery, he oversaw the transfer of the treasures to the city of Cairo to be displayed in the Egyptian Museum. In turn, some of the objects sold in the Egyptian antiquities market that belonged to Carter “clearly come from the tomb,” according to the researcher.

Some of these objects have become part of museum collections such as the Metropolitan Museum of Art in New Yorkwho in 2010 announced the return to Egypt of 19 small pieces acquired between 1920 and 1940 that belonged to the tomb of Tutankhamun.

As part of this documentary record explaining the removal of objects from the grave, The Observer quote the book Harry James on Carter, from 1992, where the author uses the archaeologist’s correspondence, which is in the custody of the Griffith Institute at Oxford University, and refers to a dispute with Gardiner which led to the return of an amulet to Cairo.

The curse of Tutankhamun that haunted the discoverer of his tomb to death
Gallery: the delicate work of restoring Tutankhamun’s sarcophagus for the first time
The photos of Tutankhamun’s tomb after 10 years of work to restore its luster and ensure its preservation