Roggenstorf / Schönberg.Lunch break. Thomas Meier has completed half of his working day in the professional hardware store in Schönberg. However, when others unpack their sandwiches, the store manager puts on his running shoes. Thomas Meier is an extreme athlete. He runs more than 50 kilometers a week and cycles four times as much. His training schedule is precisely coordinated – by a professional coach. Thomas Meier is not only extreme in the distances he covers – no, his ambition is also very pronounced. His big goal is the world championship in long-distance triathlon – the Ironman in Hawaii. “I definitely want to start there and I can do it,” says Meier.

Why the competition in Hawaii? This question does not arise for triathletes. The Ironman is by far the most popular competition for long-distance triathletes. And not everyone is allowed to start there. “Of course you can also buy a starting place for tens of thousands of euros, or you are lucky and are part of one of the draws. But actually you only make it through strong placements in other big races and with unbelievably good times. But I’m not that good,” says Thomas Meier very modestly. For him there is therefore the slog. Because a backdoor in the regulations says that starters who have already made it to the finish in twelve long-distance triathlons and have completed another such competition in the year of the Ironman are also allowed. “I’ve done it nine times. This year I will start in Hamburg and Copenhagen. Then it’ll be eleven and I’ll be closer to my dream,” says the sports fanatic.

Thomas Meier at the Ironman in Hamburg on his carbon competition bike.

See also  "A monstrosity of an airplane": The Antonow has landed in Nuremberg - Nuremberg

The insane routes for iron athletes

The unbelievable distances that the athletes cover in a competition sound breathtaking in the truest sense of the word. 3.8 kilometers swimming, 180 kilometers cycling and 42.8 kilometers running – all in one go. Or as Thomas Meier likes to call it: “Refresh briefly in the water, then roll up before the marathon comes,” he says with a wink. Above all, Thomas Meier loves to run. He joined in 2008 when a friend asked him to represent him at the Berlin Marathon. After all, Meier is not only a long-distance triathlete, he also likes the halved distance or runs in marathons or smaller competitions. As in the Schwerin night run when he came second over 20 kilometers. But his focus is currently clearly on the big triathlon in Hamburg.

In Copenhagen, the ten-hour mark should fall

He therefore wants to include swimming again in training. It’s a good thing that the Schönberger natural pool is open again. Otherwise he does his lengths in the Grevesmühlen Ploggensee. He easily winds two kilometers down there. “But the 3.8 kilometers in the competition are tough for many participants. You fight your way through because many people prefer cycling and running to crawling through the water,” says Meier. When Hamburg is done, he still has a score to settle with Copenhagen. A pinching calf and a burst inner tube in the rear wheel prevented him from achieving his best time. It should be this August in Denmark. “I want to crack the ten hours,” says Meier, whose best time is 10:23.04 hours. He swims the almost four kilometers in 80 minutes and needs about 5:20 hours for the 180 kilometers on the bike. And then he manages the marathon in well under four hours. 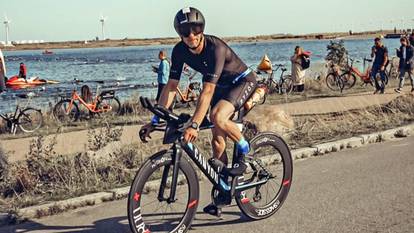 With the race in Copenhagen, Meier still has a score to settle. A flat tire prevented his best time. In August he starts here again.

Doctor: “Body not designed for such loads”

He feels in top shape and has his doctor check him up regularly. “It’s okay,” he says. But experts often have a different opinion on extreme sports. “From a medical point of view, this type of sport is absolutely unhealthy,” says Dr. Jorn Bogun. The chief physician for orthopedics and trauma surgery at the DRK hospital in Grevesmühle explains why. “The human body is not designed for such loads. Sports physicians can only try to limit the damage to patients. Both the entire supporting apparatus and the cartilage in the joints, but above all the highly trained heart, can be damaged. If you don’t stop training after your career, there are serious risks,” says the doctor.

Most beautiful race in Mexico: turtles on the beach

Thomas Meier knows the risks of his sport. He feels good and hasn’t had any problems so far. And he burns for his sport. You can often see him in Boltenhagen with his bike or with running shoes on his feet all around Schönberg, Roggenstorf or Grevesmühlen. For the competition, the places then sound less regional. “The most beautiful place where I started was the Mexican island of Cozumel. I’m more of a warm-weather athlete anyway, and it was fantastic there. I was even able to observe turtles along the coast there,” enthuses Thomas Meier. The 41-year-old has already traveled to many countries. He started in Sweden, Denmark and Austria, among other places. New York and Boston in the USA also appeal to him.

Expensive hobby: tens of thousands of euros for materials and travel

But all of that costs an insane amount of money. “I really have an expensive hobby,” says Meier. In addition to the flight or travel costs, there are often three nights in hotels and the entry fees, which are often around 600 euros. “But the material also consumes a lot of money. The carbon competition bike costs around 10,000 euros. Half that for training. The wetsuit for swimming up to 800 euros. I need four pairs of €200 sneakers a year. They’re all worn out. Then there’s the one-piece suit for the race for 250 euros and a few little things like watches, sunglasses and so on,” the athlete lists. 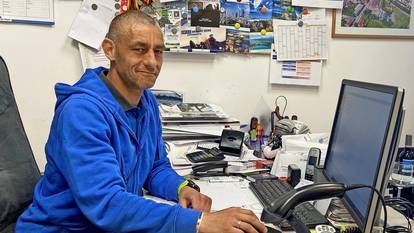 In his office in the professional hardware store in Schönberg: Thomas Meier at the computer. At noon he puts on his running shoes and does a little lap of five to ten kilometers.

To relax golf and “netflix” on the couch with the wife

The patchwork dad with three children is very happy that his wife is so supportive and understanding. But he also has to lend a hand on the large property in Roggenstorf. You can’t run away. “I get on the tractor and mow the lawn. But to be honest: I also enjoy watching netflix with my wife on the couch,” says Thomas Meier. And he also found a balancing sport with his boss. “Sometimes we go for a round of golf. I have a very good relationship with my boss. He knows I’m crazy,” says Meier. And he laces his sneakers again and steams off for a little run during the lunch break.