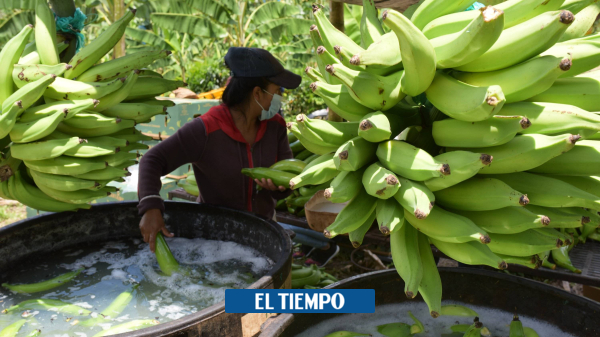 Exports to the United States: how are sales – Sectors – Economy

In the hit of 8,432 million that exports had in 2020 due to the pandemic, almost a third (30.7 percent) was due to the contraction of sales to United States, a country for which, in the year of covid-19, Colombia represented 29 percent of the total traded.

But five months later, the securities sold to the first business partner show a representative recovery with cut to the month of May, even taking advantage of the spaces that have necessarily been left by the commercial tensions between the country of Uncle Sam and China.

(You may also be interested in: They must give you permission to go to get vaccinated during work hours)

An analysis of the Colombian American Chamber of Commerce (Amcham Colombia), carried out based on figures from the US Census Bureau, revealed that half of the sectors that Colombia regularly exports to the United States recovered the pace of their sales and between January and May they exceeded the value exported to that country in the same period of 2019 .

Thus, 45 of the 90 items that Colombia exports to the United States are already above the levels observed during the same period of 2019, going from a value of 1,908 million dollars to 2,748 million in 2021, for an increase of 44 percent compared to the year before the pandemic.

According to the document, for this the non-mining energy sector was fundamental, since the textile, manufacturing and agricultural industries have been currently boosting trade.

According to US Census BureauDuring January and May of this year, exports to the United States totaled 5,101 million dollars, of which sales other than oil and mining represented about 59 percent of the terms of trade.

Of this group of products, the five items with growth above 100 percent with respect to the level shown in 2019 were iron and steel, with 17.4 million dollars and an advance of 651.3 percent; salt, sulfur, rocks, lime and gypsum, which sold $ 13.6 million for an increase of 419.3 percent), and soaps, waxes, polishes, candles and dental preparations, whose value increased 304.3 percent .

They are followed by level of increase lacquer, gums, resins and other plant extracts, an item in which 162.2 percent more was sold, and live animals, an item in which 1.6 million dollars were sold, for a rise of 155.4 percent compared to the period January-May 2019 .

Taking advantage of the tension

And also, between January and May, exports to the United States of Colombian products identified by Amcham Colombia with opportunity within the commercial tension of that country with China continued to grow, with sales of 2,616.4 million between January and May of 2019 to 2,913.1 million dollars in the same period of this year, for a growth of 11.3 percent.

“It is important to continue encouraging foreign trade, and in particular exports, as a long-term strategy for companies to better cope with economic situations,” said María Claudia Lacouture, director of AmCham Colombia. On this front, according to the entity’s analysis, in the first five months of this year, of the 108 products that have been identified with opportunity, 48 sales to the United States increased, exceeding the pre-pandemic exported values.

Indeed, in those months of the year textiles; ceramic articles; machines, apparatus and mechanical devices; preserved vegetables; from the food industry; inorganic chemicals; weapon parts and accessories; soap and laundry preparations; mechanical appliances; papers and their articles; common metals and their derivative products; supplies for construction; Fresh fruits; and gold are the main sectors that presented increases.

“Of the 108 products, 48 ​​showed an average growth of 181.6 percent, while the United States decreased its imports from China in 26 of those products,” emphasizes the analysis, and specifies that the average drop in the supply from China in those goods is 35.1 percent.

These are products of the textile sector; food and its preparations; aluminum; plastics; flowers and construction supplies which stand out in the Colombian growths and Chinese decreases.

(Also, read: Annual inflation of eggs was 31.26%; the effect of unemployment continues)

Products with a clear advantage over China

In 2021, AmCham Colombia identified 16 products in which Colombia has a revealed comparative advantage greater than 1 compared to China, but did not carry out commercial transactions with the United States.

In this regard, the entity found that, so far this year, until May, the country has already exported in seven of the 16 opportunities identified, for 5.7 million dollars, a value that may be seen as small but that adds up to time for diversification.

These include sales of pads and tampons; yeasts; ambergris, castoreum, civet and musk of animal origin used for the preparation of pharmaceutical products; hydrogen chloride; fluorine, chlorine and bromine; and raw hides and skins, fresh or salted, dried, limed, pickled or otherwise preserved. And while exports are increasing from Colombia, the United States has decreased its imports from China in 8 of 16 products.

See also  A millionaire and his wife, the new victims of the luxurious "Island of Death"

You can also read in Economics:

– What you should know about credit life and credit score
​
– Solidarity Income: the banking entities in which you can collect it

– Who is required to declare income? All you need to know