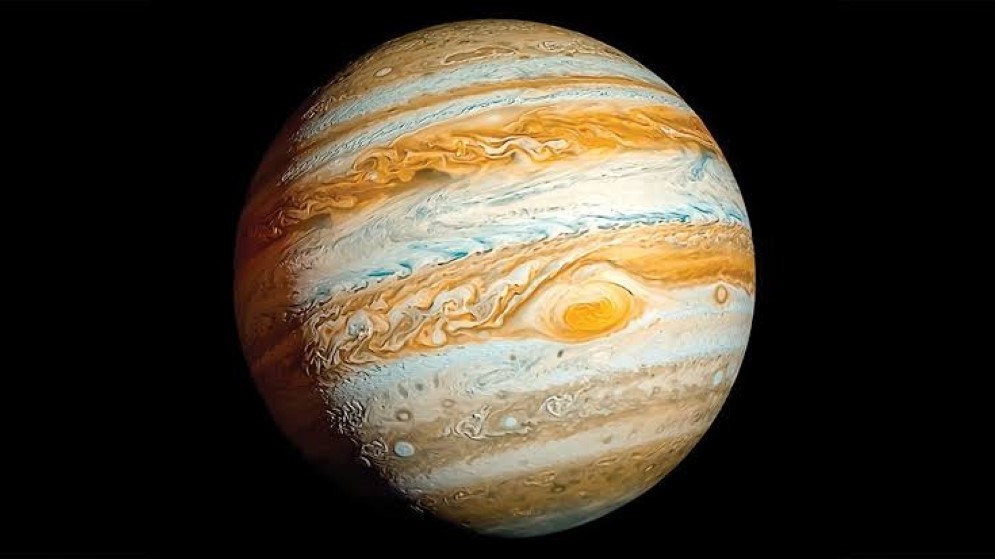 Scientists have succeeded in making an exciting discovery from inside Jupiter, the fifth planet from the sun and the largest planet in the solar system. It is a gas giant and its mass is just less than 1/1000 of the mass of the sun.

Scientists discovered that the interior of Jupiter consists of the remains of small planets that were devoured by the gas giant during its expansion to become the size it is today.

The results come from the first clear view under the planet’s cloudy outer atmosphere. Despite being the largest planet in the Solar System, Jupiter has revealed very little about its interior composition.

Telescopes have captured thousands of images of vortex clouds in the gas giant’s upper atmosphere, but these swirling storms, similar to Van Gogh’s paintings, are still visible.
In the new study, scientists were finally able to see the gas veil of Jupiter using gravity data collected by NASA’s Juno space probe, according to Akhbar Al-Youm.

This data enabled the team to map the rocky material at the giant planet’s core, which revealed a surprisingly large abundance of heavy elements, suggesting that Jupiter devours small planets, or mini-planets (which are solid bodies thought to reside in rotating planetary disks). and in debris discs), to grow to its current size.

Jupiter began life with the planet’s gravity, which pulls rocks and gases from great distances. This was mostly hydrogen and helium left over from the birth of the Sun, which made up the enormous gas-filled atmosphere.

The results of the study support a proposed theory that Jupiter’s core was formed by the absorption of many small planets, large space rocks extending for several miles, and if these space rocks were left undisturbed, they could potentially evolve into rocky planets such as Earth or Mars.

“Since we cannot directly observe how Jupiter formed, we have to put the pieces together with the information we have today,” the study’s lead researcher, Yamila Miguel, told Live Science.

“Here on Earth, we use seismometers to study the planet’s interior using earthquakes,” Miguel explained.

But since there is no surface for Jupiter to place such devices on, scientists have built computer models of Jupiter’s interior by integrating data collected by sensors aboard vehicles such as Juno and Galileo.

The sensors measured the planet’s gravitational field at various points around its orbit, and this data enabled the team to determine subtle differences in the planet’s gravity, which helped them figure out where the rocky material was inside the planet.

Research models revealed that there are 11 to 30 Earth masses of heavy elements within Jupiter (3% to 9% of Jupiter’s mass), which is much more than expected.

The new findings could change theories of the origin of other planets in the solar system, such as Saturn, Uranus and Neptune.