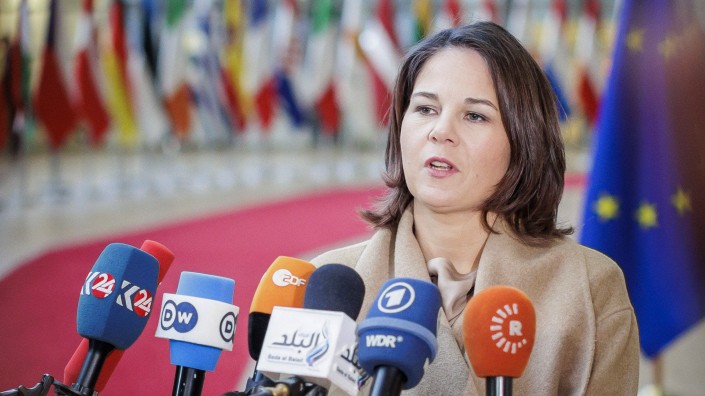 The EU approves the fourth package of sanctions against Iran, but does not put the Revolutionary Guards on the terrorist list. The Federal Foreign Minister criticizes this.

The European Union is punishing other people and organizations in Iran for the brutal treatment of opposition demonstrators. However, the Union currently sees no possibility of putting the Revolutionary Guards on the EU terror list.

At a meeting in Brussels on Monday, the foreign ministers of the 27 EU countries approved a fourth package of sanctions against Iran because of ongoing human rights violations. As a result, any assets of a good three dozen other individuals and organizations in the EU will be frozen, and the persons concerned will no longer be allowed to enter the Union. Some of the regime representatives who have now been sanctioned are high-ranking – such as the Minister for Youth and Sports or the leader of the so-called moral police.

The EU has only sanctioned individual commanders of the Revolutionary Guards

However, EU foreign policy chief Josep Borrell made it clear before the meeting that, unlike the United States, the Union was not in a position to declare the Revolutionary Guards as a whole a terrorist organization, even though they are largely responsible for the violence against demonstrators. Germany and France, among others, had called for this step. In a resolution last week, the EU Parliament also called for the Revolutionary Guards to be put on the terrorist list.

According to Borrell, however, there is no legal prerequisite for this: the EU can only declare groups to be terrorist organizations that have been convicted of terrorist activities by a court in a member state or that are being officially investigated for this reason. So far, this has apparently not been the case with the Revolutionary Guards. “You can’t decide something like that without a court, without a court’s prior decision,” Borrell said. “You can’t say I think you’re a terrorist because I don’t like you.”

German Foreign Minister Annalena Baerbock disagreed. In Iran there is a brutal regime against the people, she said in Brussels. “The Iranian regime, the Revolutionary Guards, terrorize their own people every day.” On Monday, the EU managed to put several commanders of the Revolutionary Guards and a number of regional units of the troops on the new sanctions list. They are all responsible for “serious violations of human rights,” according to the decision. The accusation of committing acts of terrorism, however, is not raised.

Diplomats still hope for a revival of the nuclear agreement

However, the legal problems are probably just one reason why Brussels is reluctant to declare the Revolutionary Guards terrorists across the board. In talks, European diplomats have repeatedly let it be known that they have not given up hope of being able to revive the nuclear agreement with Tehran at some point. The treaty aims to limit Iran’s nuclear program and prevent Tehran from building nuclear weapons. Since this program is under the control of the Revolutionary Guards, putting them on the EU terror list would be counterproductive.

In addition, the Revolutionary Guards control a significant part of politics and the economy in Iran. Declaring them terrorists would be a blow to the regime in Tehran. It could react to this with secret service or paramilitary actions in Europe or against European institutions in the Middle East. The Iranian regime has expressly warned Borrell against such a step.

See also  Municipal police suppressed by CJNG hitmen would have reported theft of weapons; Alfaro says that "this is an old topic"