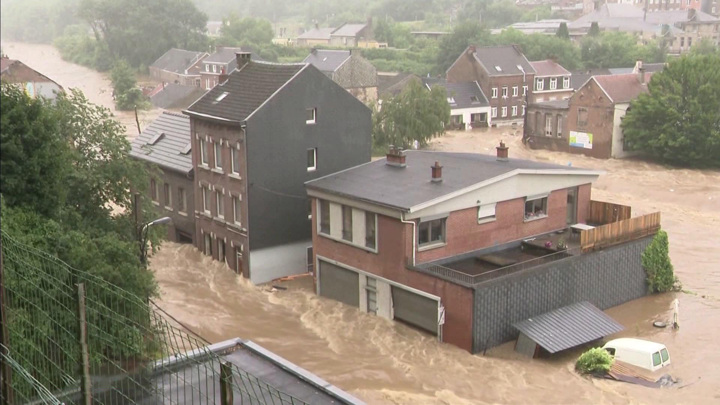 Europe during these hours literally goes under water. The strongest cyclone hit the central and western regions. The consequences of the disaster are catastrophic: huge territories in Belgium and parts of France were flooded. But the worst of all is the situation in Germany, where there are already dozens of dead and missing. People are simply washed off the streets. The stream carries away cars and entire houses. The authorities do not even undertake to calculate the damage yet. In connection with the tragic consequences of the cyclone, President Vladimir Putin sent condolences to Chancellor Merkel.

What is happening now in Belgium is called nothing more than the apocalypse. Almost half of the country went under water. It has been declared a disaster zone. In some areas, the level of the rivers has risen by two and a half meters. People, waiting for rescuers, climb onto the roofs, but the water keeps rising.

“I went to work,” the man says. “When my wife called me, I returned. But it turned out that my wife and I were cut off by water. I can’t help them.”

These are no longer streets, but seething mountain rivers in the center of Chieux, along which boards and the remains of houses washed away by such streams float. The owners watch their cars helplessly.

City squares turned into lakes with strong underwater currents. An army has been thrown to help people, trucks are taking people to safety. Where the military does not have time, local farmers rush there, pulling neighbors out with the help of bulldozers or tractors. You can’t walk along such streets.

Abandoned goats seek protection from people, cows hold their heads high so as not to choke. At dawn, a train derailed, part of the railroad track was destroyed. Traffic is stopped throughout the southeastern part of the country. The highways are flooded. Many districts were left without electricity, communications and drinking water. Someone has fun with what is happening.

But later, rescuers found the body of a 22-year-old young man who also dived into a stream with an inflatable ring for fun. There are already six dead, there are missing persons. Among them is a 15-year-old girl who was washed away with water in front of her friends who could not help her.

“Leave Liege, everyone you can” – such an urgent appeal was issued by the mayor of the city. the water in the Meuse river is coming every hour. Its level will rise: another one and a half meters, and the city center will go under the water, the embankments are no longer visible.

It is still raining, the peak of the flooding is expected in the evening.

Rescuers from the north of Belgium were deployed to the south of the kingdom, the king personally goes to the disaster zone, the authorities ask volunteers for help. France is ready to help. This was stated by the head of the foreign ministries of the countries Jean-Yves Le Drian, despite the fact that the north-west of France also goes under water. In dozens of departments, the orange alert level, the water continues to arrive.

In Germany, there are already more than four dozen dead. Among them are firefighters who worked to eliminate the consequences of the flood at one of the power plants. Many people are reported missing. Rescuers cannot reach all areas yet. The situation is further complicated by the fact that there is almost no connection anywhere, cables are torn. The streets have turned into streams.

The current is so powerful that it picks up and carries away not only cars, but also houses on wheels, which at the moment are crushed against the bridge supports.

This is a disaster, as the locals describe what is happening. And the scale is terrifying. Many residential buildings were destroyed. The courtyards have turned into a heap of scrap metal, where cars are one on top of the other interspersed with earth, broken trees and other debris. There is information that marauders began to wield in the flooded areas.

“This is a real disaster. I am shocked by the information that I receive from flooded cities. I mourn with those who lost their loved ones as a result of the tragedy. We still do not know the exact number of victims,” ​​admitted the Federal Chancellor of Germany Angela Merkel, who came to the United States to meet with President Joe Biden.

Cologne, Dusseldorf, Bonn at the mercy of cyclone Bernd. 148 liters of precipitation fell per square meter in two days, while usually about 80 per month. A state of emergency has been declared in the city of Hagen. The water has not risen so high there for the last hundred years.

– I’ve never seen anything like this! The situation is critical! Everything is destroyed!

It is not yet possible to assess the economic damage; it is not yet possible to reach many areas. And while some are struggling with the elements, others do not forget to engage in elections, which are a month and a half away. The natural disaster became an excuse to remind voters of global warming. Environmentalists, who come second behind the Conservatives, expect the green agenda will now add points to them.