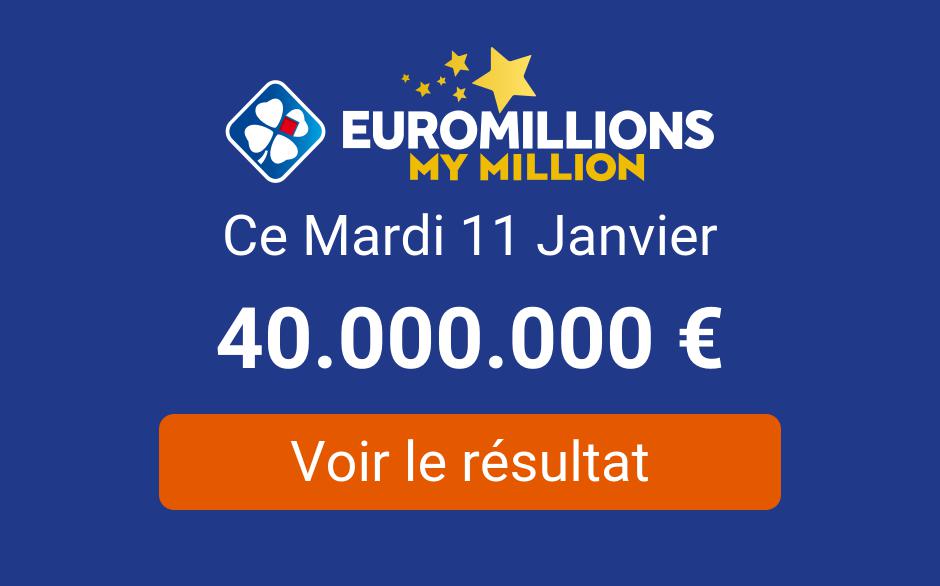 The European Euromillions lottery will offer a jackpot of 40 million euros this Tuesday, January 11, 2022 after two draws in a row without a millionaire in Europe. If participation is slightly down since the beginning of this year, it is without counting on the wave of millionaires to come on January 21 for 100 winners at 1 million euros who could re-energize this.

Nearly 20 million grids were played on Tuesday evening during this Euromillion draw. In Europe, 1.5 million grids were won but none of them managed to win the jackpot. Among the biggest winners, we find 4 players who, finding 6 of the 7 correct numbers, won € 140,479.60. The next draw on Friday January 14, 2022 will feature a jackpot of 54 million euros.

The My Million draw has just been drawn and the winning code made a big winner in the Nouvelle-Aquitaine region, it is the third My Million code drawn in 2022. This player can already celebrate this evening of Tuesday, January 11, while the others, in France or elsewhere in Europe will have to wait a few more minutes before finding the result of the Euromillions draw from 9.15 p.m.

The last draw which took place this Friday attracted 24 million grids played across borders. In France, more than 300,000 grids have been won, but it is with our Spanish and Portuguese neighbors that the luck has been the most striking, with winners in particular at rank n ° 2, winning € 173,314.

Today, if you want to find the result of this draw or simply participate in it, don’t wait a second and tick your favorite numbers before 8:15 p.m.

Play a Euromillions My Million grid before 8:15 p.m. this Tuesday, January 11

Will the Euromillions lottery make you the next multimillionaire?

For that, you will have to play a grid and to try your luck this Tuesday evening, two choices are available to you.

Each simple grid checked (5 numbers + 2 stars) will cost you € 2.50, but you will also be able to add options like the Star + (1 € additional per grid), to tick more numbers via a multiple grid or to play in groups via the Multichances FDJ formulas.

Result of the My Million draw: the raffle and its guaranteed millionaire this Tuesday

A new My Million code will be available this Tuesday evening and a player, in France, will receive the sum of 1 million euros.

This guaranteed millionaire will be the 4e of this year 2022 while in 2021, 105 winning codes were distributed to 102 millionaires confirmed all over France.

For this My Million draw on Tuesday January 11, 2022, the winning code will be announced from 8:50 p.m., don’t miss this new result and match your My Million code to it.

In parallel with the My Million draw, it is the winning numbers of the Euromillion that will be of interest to players who have not had the chance to become a millionaire through the French raffle.

So, this Tuesday, January 11, you will be able to follow the result of the Euromillion draw from 9.15 p.m. then, if applicable, to match your winning numbers to the different ranks of intermediate winnings in order to know the amount of your Euromillions winnings in a few clicks.

In the absence of a winner this Tuesday evening, the amount of the next jackpot put into play next Friday will certainly exceed the bar of 50 million euros.

What is the prize pool at stake at Euromillions this Tuesday evening?

Following two draws without a winner, the amount of the Euromillions jackpot stands at 40 million euros on Tuesday, January 11, 2022. Without a winner today, it could soar above 50 million. euros for the next Friday draw.

How to play a Euromillions grid for today’s draw?

To play a Euromillions grid this Tuesday, you must go to the FDJ.fr site or to a point of sale and check your numbers before 8:15 p.m. The price of each grid played at Euromillions (single grid) is € 2.50.

At what time will the Euromillions draw results be available tonight?

The results of the Euromillions draw will be posted online from 9:15 p.m. after being drawn at around 8:40 p.m. in the studios of the Française des jeux in Boulogne-Billancourt. The announcement of the earnings report will only take place from 10 p.m.