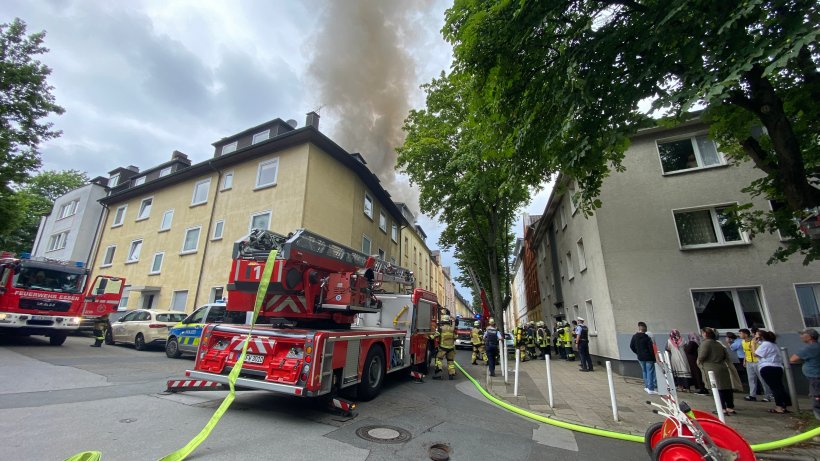 Essen: The roof structure is completely on fire – the fire brigade is fighting against a spreading fire

Essen. On Friday afternoon there was a fire in a three-story apartment building on Bewerungestraße in Essen-Kray broke out. The top floor apartment burned to the full. The fire brigade fought against the spreading flames.

Use in Essen went into the night.

At around 3:50 p.m., an emergency call was made to the police and fire brigade about the fire in the attic apartment Essen a. Emergency services including two ambulances and an ambulance rushed to the scene of the accident and found an apartment there that was completely on fire.

This is the city of Essen:

A fire brigade spokesman reported to DER WESTEN that it was burning “in full extent”. The fire was not yet under control, it was said. The flames would continue to spread into the roof structure.

More news from the region:

Essen: THIS is the current flood situation

Essen: tenant arrested after apartment fire! Bad suspicions on the part of the police

Bochum: Be careful when these men ring your doorbell – don’t open the door, you might regret it

Dortmund: The fire brigade sends more than 100 emergency services to Erftstadt and Schleiden – and has important auxiliary materials in their luggage

Since it was initially unclear whether there were still people in the apartment on the fire, the emergency services immediately initiated a rescue with two teams. Fortunately, all residents of the house had already been able to get themselves outside, so that no one was in danger.

The police blocked Bewerungestrasse and Fürstinstrasse. The extinguishing work was still in progress in the evening. At around 11 p.m., the fire brigade returned to the scene of the accident to see whether a new fire had started. The mission was finally completed at 0.45 a.m.

A total of around 40 firefighters were on duty. The cause of the fire and the amount of damage incurred are so far unknown.