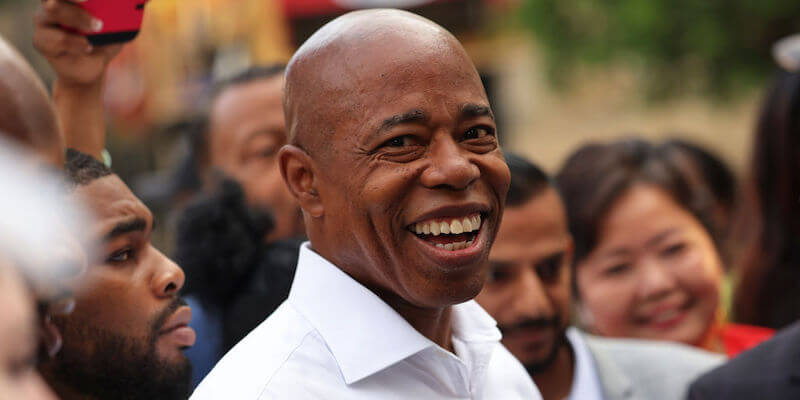 Eric Adams will be the next mayor of New York

Eric Adams, a 60-year-old former policeman with a long career in local politics, won the Democratic primary to choose the candidate for mayor in the local elections in New York, which will be held in November.

Barring huge and today unforeseeable surprises, Adams will therefore be the next mayor of the city: in recent years the city’s Democratic electorate has grown so much that Republicans are only candidates for minor politicians, certain of losing in November. The result of the primary came about two weeks after the day of the vote because for the first time it was voted with the system of ranked-choice-voting, which requires a long and complex scrutiny.

If he wins the November election, Adams will become the second African-American mayor in the history of New York after David Dinkins, mayor between 1990 and 1993.

For several weeks Adams had been the favorite candidate due to his popularity as president of the Brooklyn borough, which he ruled since 2014, and his career in the local police force. The New York Times he also writes that “in the final months of the election campaign, an increase in shootings and killings has pushed security and crime to the top of voters’ priorities,” which ultimately benefited Adams, the only candidate to have a past in the forces. of the order. At the start of the election campaign, his lead was even greater, but then it dwindled after it emerged that Adams may not have lived full-time in the city, as his wife lives in a house in the state of New Jersey.

The primaries were very fought to the end also due to the new electoral system, already used in recent years in various US cities and around the world, especially in Australia. In practice, the voters are asked to draw up a ranking of the five favorite candidates, from the most appreciated to the least appreciated. During the first phase of the counting, only the vote of the most appreciated candidate of all is taken into account. At the end of the count, the candidate with the fewest votes is eliminated. At that point the votes of the voters who had put the eliminated candidate first are transferred to their second choice, the count is made and the last arrived eliminated again, and so on until only one candidate remains, the winner.

In the last count Adams knocked out the runner-up, the former head of the municipal waste company Kathryn Garcia, with just 8,400 votes. In third place came Maya Wiley, a candidate of the party’s left and a brilliant lawyer who has long been close to the Democrats. Neither Garcia nor Wiley have officially admitted defeat, but in all likelihood they will in the next few days. Adams’ victory will be formalized by the city’s electoral commission on 12 July.

An initial analysis of the electoral flows indicates that Adams was the most voted candidate in all districts except Central Manhattan, and that he obtained broad support especially from Hispanic and low-income African American voters, as well as moderate whites. It is a very different electoral base from the one that in the last two elections for the mayor had voted for Bill de Blasio, who comes from the most radical wing of the party.

– Read also: Bill de Blasio has a problem with his constituents

The Republican primary was won by Curtis Silwa, the founder of the Guardian Angels public safety volunteer group. Silwa got 40,751 votes, or 68.1 percent of the total, beating a semi-unknown businessman of Dominican origin. In all, about 60,000 people voted in the Republican primaries, compared to about 945,000 in the Democrats’ primaries.