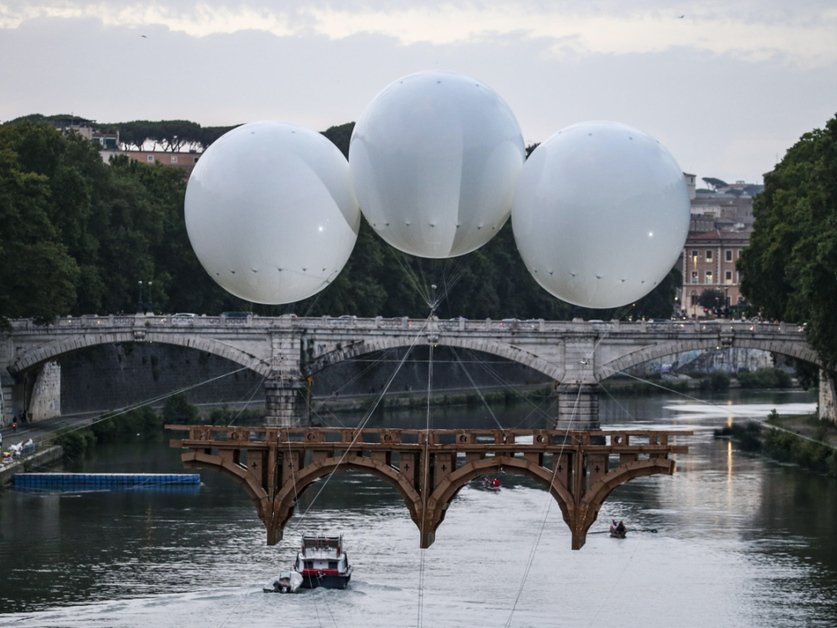 Michelangelo dreamed of it, Olivier Grossetête did it: the Marseille artist threw a cardboard bridge over the Tiber, in Rome, to connect the gardens of the Villa Farnesina to the Palazzo Farnese, which houses the French embassy in Italy.

The 18-meter structure suspended by three balloons six meters in diameter inflated with helium was inaugurated Tuesday evening in the presence of the mayor of Rome, Virginia Raggi, and the French ambassador, Christian Masset.

It will symbolically cross the river for a few days and connect the two palaces of the august Roman dynasty: on the left bank, the Farnese palace, on the right bank, the Villa Farnesina.

Dozens of little hands began to assemble the different parts of the bridge on July 8, which will be dismantled on the 18th and the components of which will be recycled. This ephemeral site in the Eternal City is participatory: 120 people, children, parents, students, young and old have measured, cut out, glued, taped.

Olivier Grossetête is a past master in the art of hanging monumental ephemeral structures. In 2019, he paid homage to another Italian genius, Leonardo da Vinci, by installing a cardboard bridge at the foot of the Château d’Amboise, in central France.

“The technical challenge here is to suspend the bridge over a river, that is to say over the current. And the wind is my anguish”, explained the artist to AFP.

Michelangelo had imagined a passage between the two Roman residences of the Farnese family, but the project, complex and expensive, had been abandoned after the death of Pope Paul III (1534-1549), born Alexander Farnese in 1468.