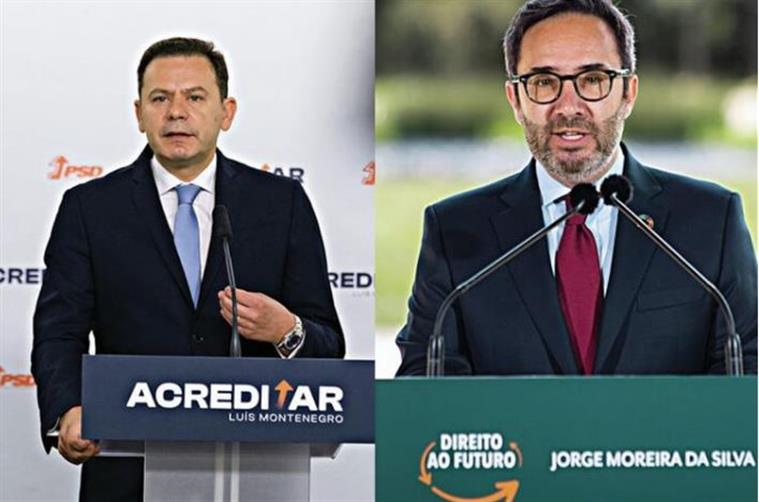 Enough is a red line between candidates

The fight for the succession of Rui Rio starts to heat up. After the two candidates for the leadership of the PSD clarified their position on the relationship that the party should have with Chega, Luís Montenegro, in his speech in the Azores last Wednesday, took advantage of the momentum to challenge his opponent Jorge Moreira. da Silva to comment on the Azorean government solution, the PSD/CDS-PP/PPM coalition and parliamentary agreements with Chega and IL.

“I have to be clear. I believe that the values ​​and principles of the PSD are not being violated with this government solution and this parliamentary solution. I live very well with the governance and governmental stability that has been achieved in the Azores”, he said, in Ponta Delgada, at the headquarters of the Regional Government of the Azores, before the President of the Executive, José Manuel Bolieiro, who in the meantime expressed support for Montenegro in this internal dispute. .

The sign of support given by the PSD/Azores leader, who in the last live matches abstained from the fight between Rui Rio and Paulo Rangel, was revealing of the damage that Moreira da Silva’s words about the relationship with Chega did. Even Ribau Esteves, who has already distanced himself from Montenegro after giving up the race for the leadership of the PSD, read them as “a certificate of minority” to Bolieiro for having relations with André Ventura’s party.

And Montenegro knew how to exploit this weakness on the flank of Moreira da Silva: “I challenge my opponent in this election to say whether or not he understands that this Government solution makes us comfortable from the point of view of respect for autonomy and for the principles and values ​​of the PSD».

When he presented himself as a candidate, the former environment minister had rejected any possibility of dialogue with Chega and was harsh with his words. “Racists, xenophobes and populists don’t fit in the PSD’s house”, he stressed at the time. The former parliamentary leader of the Social Democrats, on the other hand, took a long time to come up with a position on this aspect, evading the issue several times.

Until now, I had chosen to maintain a certain restraint in my words, mentioning that the parties to the right of the PSD are not opponents to fight. But the speech has taken another turn in recent weeks. “I refuse to do a campaign in which the main theme is Chega. It is obvious that we, in the PSD, have a red line that we never cross, which is that of our values ​​and our principles. I’m not thinking of negotiating anything with Chega”, he clarified.

In addition to the Azores, also in Madeira – the fifth largest structure of the party –, Montenegro managed to do the plenary session and brought together in the same room Miguel Albuquerque, president of the Regional Government, Pedro Calado, mayor of Funchal, and the historic Alberto João Jardim, something that surprised, given the known animosities between the former president of the Regional Government of Madeira and the former parliamentary leader.

It is notable that the social-democratic candidate leaves the islands with a positive balance, now adding the support of Alberto João Jardim in the campaign for the direct elections of May 28. «I had the opportunity to speak with grassroots militants, with mayors, with deputies in the regional assembly, with the president and members of the government, with Dr. Alberto João Jardim and, frankly, I felt very enthusiastic support, great hope», highlighted Montenegro at the end of the two-day visit to Madeira.

See also  ″Candidate for the leadership saying bad things about the PSD could not happen.″ Rangel will have lack of knowledge of the party″

With the Azores and Madeira joining the cause of Montenegro, Moreira da Silva ended up postponing the planned trips to the islands, without having yet rescheduled new dates. The internal campaign begins to approach the most decisive phase, but the accounts are beginning to get complicated for Moreira da Silva, since in addition to the insular territories, his opponent has gathered rifles in the main district structures of the party. The district leaders of Lisbon, Porto, Braga, Setúbal, Coimbra, Guarda and Viana do Castelo have already expressed support in a personal or institutional capacity.

However, having the leaders does not always mean having the districts. An example of this is the case of Porto, whose party machine is divided into different camps. Among the faces that misalign the leader of the district Alberto Machado, is the leader of the PSD-Porto municipal political commission, Miguel Seabra, who in this internal dispute will be alongside the former director-general of OECD Development Cooperation, who has Francisco Pinto Balsemão as national representative of the candidacy.

With the less oiled machine, Moreira da Silva will have to intensify contacts and redouble efforts on the ground in the coming days. And he has in his ranks two big names that helped ensure Rui Rio’s victory in the last straights: Carlos Eduardo Reis and Salvador Malheiro.

The first as campaign director, is a rising figure in the social-democratic apparatus, after in 2021 he regained the Barcelos City Council for the PSD, exerting a strong influence in the district of Braga.

The second will be helping the candidacy in the shadows, the big question is to determine the influence that still maintains after having passed the testimony to Emídio Sousa in the district of Aveiro.

What is certain is that the support of the mayor of Santa Maria da Feira was not enough for Luís Montenegro in 2020, nor for Paulo Rangel in 2021, to win the district, and Malheiro was the key to these unequivocal victories of Rio.

Manuela Ferreira Leite also made known this week her support for the candidacy of the former Minister of the Environment. And in the coming days, other ‘notable’ Social Democrats may appear alongside the Famalicense.

Last Wednesday, a meeting of the parliamentary group stirred up the PSD with internal differences caused by the presentation of two projects, namely the constitutional review and the electoral law, just over a month before the party’s internal elections. Deputies from the Montenegrist wing accused Rui Rio’s leadership of wanting to condition the new leader. And the meeting ended with the Social Democrat parliamentarians deciding not to immediately deliver their projects to Parliament, leaving the possibility open.

On the subject, Montenegro left votes for “common sense” to prevail during the internal electoral period.

And he recovered medically assisted death, an issue for which this week the PS presented a new proposal for a law with a view to decriminalizing euthanasia. In relation to this matter, Montenegro considers that “the best option to legislate is to hold a referendum” and “to promote a great discussion on the concepts”.

Moreira da Silva, in relation to Rio’s reforms, was open to taking advantage of the work already done by the party, especially with regard to electoral law, and underlined the legitimacy of the current leader. «The PSD is not in the process of vacating and has a leader, who is a leader until the last day», he stressed.