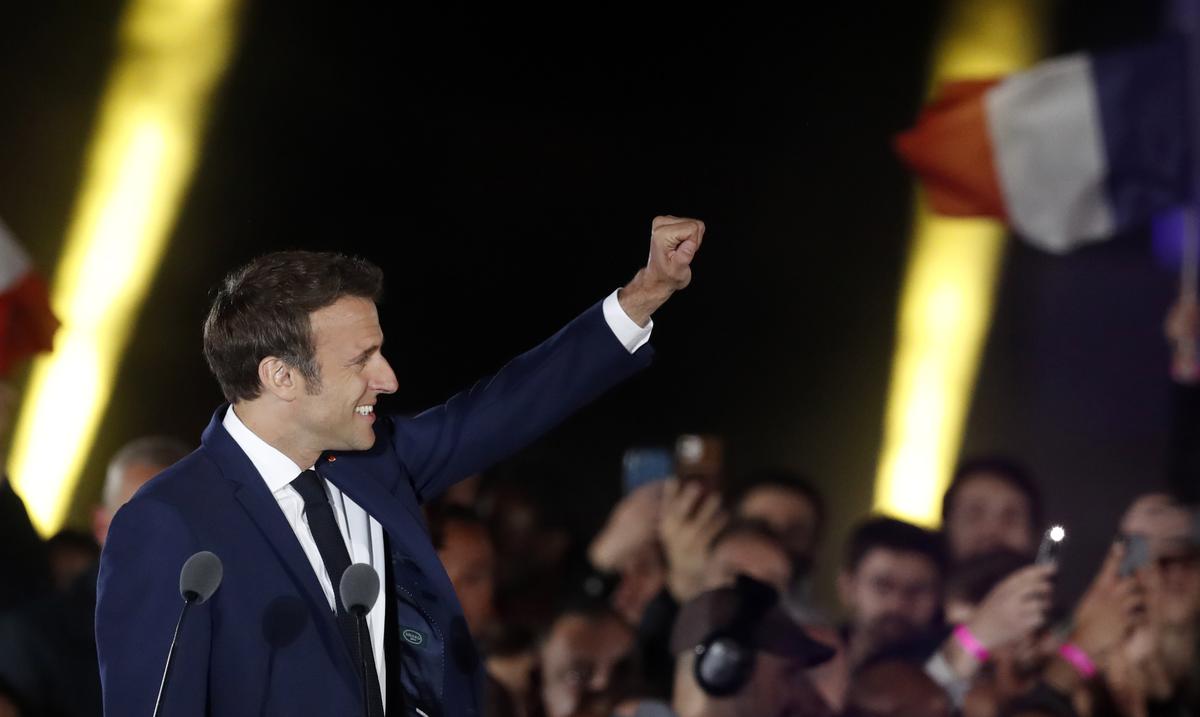 Paris – Emmanuel Macron was re-elected today, Sunday, as president of France after clearly prevailing in the second round of the presidential election against the far-right Marine Le Penwho signed his best result in an election, but it was insufficient to gain power.

With 97% of the votes counted, the 44-year-old liberal achieved 57.41% of the votes. In the absence of adding the remaining votes, mostly from large cities, the French president obtained almost 17.5 million votes, compared to almost 13 million for his rival.

That is half the difference that the current president obtained five years ago in his first duel in the second round against the leader of the extreme right.

The abstention this Sunday was 27.62%, the highest in a second round of a presidential election since 1969, marked by the withdrawal of De Gaulle after the student revolts of the previous year and by a clear call for abstention from the left.

A) Yes, Macron will be the first French president to be re-elected in 20 yearssince Jacques Chirac he outscored Le Pen’s father by a wide margin in 2002.

The president’s re-election prompted sighs of relief among allies that the nuclear-armed European nation will not abruptly distance itself from efforts by the European Union and NATO to sanction and contain Russia’s military expansionism in Ukraine.

A second five-year term for the centrist ruler spares France and Europe the seismic shock of having the 53-year-old far-right hopeful at the French helm.

Macron was modest in his speech, delivered in front of the Eiffel Tower, where he arrived hand in hand with his wife Brigitte and surrounded by a group of children among the notes of the Ode to Joy, the same European anthem he chose five years ago in front of the Louvre Museum.

Acknowledging that “a large” group of people voted for him simply to prevent Le Pen from becoming president, Macron vowed to reunite a country that is “full of so many doubts, so many divisions” and to work to mitigate voter anger. Frenchmen who launched Le Pen’s campaign.

“No one will be left behind”Macron declared in his victory speech with the Eiffel Tower in the background and a projection in the colors of the French flag. He was cheered by several hundred supporters jubilantly waving French and European Union flags.

“We have a lot to do and the war in Ukraine reminds us that we are going through tragic times in which France must make its voice heard”Macron stressed.

During her campaign, Le Pen pledged to dilute Paris’ ties with the EU, NATO and Germany, moves that would have shaken Europe’s security architecture at a time when the continent is facing its worst conflict since World War II. World. Le Pen has also spoken out against the bloc’s sanctions on Russia’s energy supplies and faced scrutiny during the campaign for her previous friendly ties to the Kremlin.

Celebrating your victory, Macron acknowledged his debt to the voters who helped him win the second round, “not to support my ideas, but to contain those of the extreme right.”

“I want to thank you and tell you that your vote binds me in the years to come,” he said. “I am the custodian of their sense of duty, of their adherence to the Republic.”

After assuring that he has “stopped being the candidate of one party to become the president of all”, He promised to “listen to the silence” of the abstainers and “the anger” of those who opted for his rival and promised to open “a new era” with a “new ambition”.

They praise the triumph of “democracy”

A chorus of European leaders hailed Macron’s victory, as France has played a leading role in international efforts to impose sanctions on Russia and arm Ukraine.

“Together we will move France and Europe forward”tweeted for her part the president of the European Commission, Ursula von der Leyen.

Italian Prime Minister Mario Draghi praised Macron’s victory, calling it “splendid news for all of Europe” and a boost for the EU “to be a protagonist in the greatest challenges of our times, starting with the war in Ukraine.”

Le Pen recognized her defeat and President Macron’s victory. However, he emphasized that the unprecedented percentage he obtained in the elections “is in itself a dazzling victory”, assuring that “in this defeat I cannot help but feel a certain hope”.

“The ideas we represent are reaching great heights”he claimed.

Exceeding the threshold of 40% of the votes is something unprecedented for the French extreme right. Le Pen fell to Macron by 66% compared to 34% in 2017, and his father received less than 20% of the preferences against Chirac.

Le Pen’s percentage this time is a reward for years of work to make far-right politics more attractive to voters. Campaigning on cost-of-living issues, he made deep inroads with working-class voters in rural communities and former industrial centers.

Le Pen voted in Henin-Beaumont, in the former industrial heartland of France. There he cheerfully greeted poll workers in the northern city. He emerged from the radiant voting booth and deposited his ballot in a transparent box. Outside, he took photos with his followers.

Then came Macron, who shook dozens of hands, and carried a child, on his way from the family home in the English Channel resort town of Le Touquet to his polling station.

Voted !
To the thousands of French men and women who allow the ballot to take place: thank you. In the polling stations of our cities and towns, you are the beating heart of our democracy. pic.twitter.com/uMzsMu0pJi

Inside, the president greeted more people, posed for photos with his wife Brigitte and cast his vote with a wink for the cameras. The voting booths were protected by curtains of the red, white and blue of the French flag.

Five years ago, Macron won a landslide victory and became, at 39, the youngest president in the history of France.

For many who voted for left-wing candidates in the first round on April 10, this second vote poses an ugly choice between nationalist Le Pen and a president some believe has shifted to the right in his first term.

The president, who, due to the 2008 constitutional reform that limits the maximum number of consecutive terms to two, will not be able to run in 2027, acknowledged that it will not be an easy task.

Macron becomes the first president to be re-elected since 2002 and the first to do so in a presidential election that he also faced with a favorable parliamentary majority.

It is sweeping the big cities, among voters with a certain purchasing power and among the elderly, but it remains unconvincing in the most deprived regions.

That is where Le Pen has fished, who has seen how his strategy of washing the face of the party, focusing the campaign more on purchasing power and the popular classes abandoned by globalization, has allowed him to advance and, for the first time in history, overcome 13 million votes.