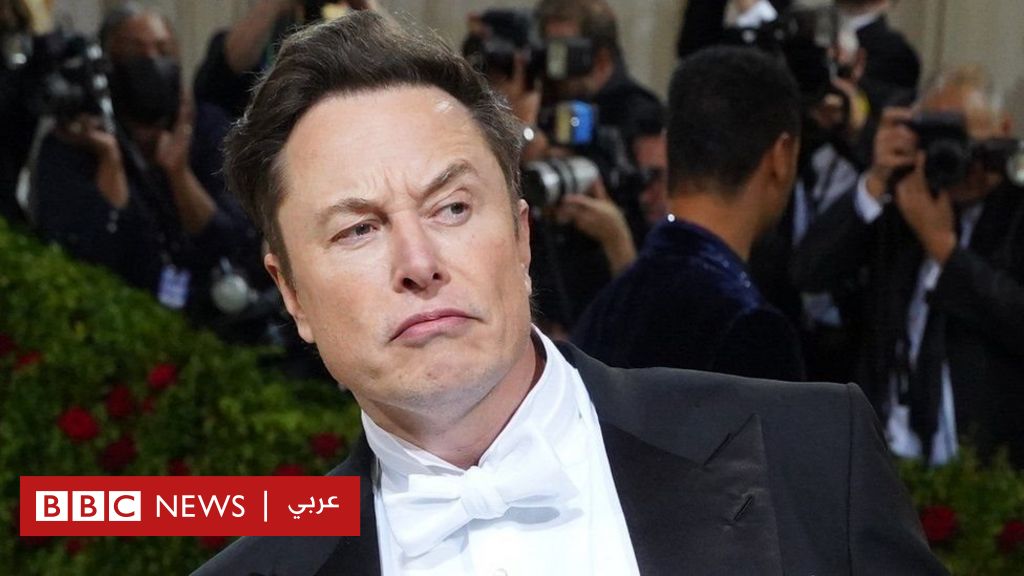 Elon Musk: Are there real concerns behind the American billionaire’s announcement that his Twitter acquisition is “suspended”?

Elon Musk, the world’s richest man, said he would temporarily suspend his proposed acquisition of Twitter.

And Musk posted a tweet in which he said he was still waiting for details that fake accounts on the platform do not make up more than five percent.

Musk later said he “remains committed to the acquisition,” but his comments raised suspicions on Wall Street, sending Twitter’s stock price down.

Twitter shares fell by 10 percent in morning trading in New York. The share price had fallen from $54.4 even before Musk’s comments, indicating that the markets are not convinced he will complete the buying process.

Some analysts say that Musk may seek to renegotiate the acquisition price of Twitter, or that he may walk away from the whole thing.

Last month, Twitter’s board of directors approved a $44 billion offer from the head of Tesla to take over the company.

From a circus to a horror movie

Dan Ives, a technology analyst at investment firm Wedbush Securities, said Musk’s tweet “will turn what was hitherto a circus-like subject matter of the acquisition into a horror movie.”

He added that many might view Musk’s highlighting of the number of spam accounts on the site as an excuse to “walk out of the bargain in a dramatically changing market.”

“The nature of Musk creating a lot of uncertainty from his tweet is worrisome for the markets…and now there are no definitive answers on the path of this deal,” he said.

Under the terms of the deal, if Twitter or Musk withdraws, the withdrawing party must pay the other party a $1 billion cancellation fee.

Musk had called more than once to “defeat spam bots” on Twitter, saying that it was one of his priorities after completing the acquisition deal.

Twitter had said more than two weeks ago that fake accounts represented less than 5 percent of daily active users on the site during the first three months of this year.

The number of spam accounts on the service is significant, as having a higher number of estimates for this type of account can hurt the ability to increase ad revenue or paid subscriptions, said Susanna Streeter, an analyst at Hargreaves Lansdon. Make sure that Musk is true to his concerns. “There will be questions as to whether fake accounts are the real reason behind this stalling tactic, given that it appears that promoting free speech rather than focusing on wealth creation was the primary motivation behind Musk’s acquisition,” she added.

Musk is also the CEO of Tesla and has used a large amount of his shares in the electric car maker to help fund the Twitter acquisition.

Musk sold $8.5 billion worth of shares in Tesla and planned to borrow $12.5 billion against his stock, but reduced the loan amount by $6.5 billion.

Tesla’s stock price has fallen sharply since Musk revealed he wanted to buy Twitter over fears he might have to sell more shares.

But after Musk tweeted that the deal was temporarily on hold, Tesla’s stock price jumped 6.7% in pre-market trading.

Another development in the story of Elon Musk’s attempt to own Twitter.

The American billionaire says that one of his priorities was to “clean up” the platform and get rid of bot and spam accounts.

It only takes a while on Twitter to find evidence of both.

Twitter said less than 5 percent of its active users are fake.

Does this mean that Twitter is not a gem that needs to be polished to show its true value? And if so, does that make it less valuable?

Of course, it’s also possible that Musk’s reluctance stems from how he intends to finance the deal, as he’s already had to sell some of his valuable Tesla shares to raise money, and that has had an impact on the car company as well.

Musk should think about it.

Musk’s latest announcement came shortly after Twitter confirmed that two of its managers would be leaving in one of the largest restructurings since Musk reached an acquisition deal.

The two CEOs were driving Twitter’s consumption and revenue operations.

Starting this week, the company has also halted most hiring, except for “critical roles at work”.

A Twitter spokesperson told the BBC: “We are eliminating non-labor costs to ensure we are responsible and efficient.”

Cayvonne Bikbor, who led Twitter’s consumer division, and Bruce Flack, who oversaw its revenue division, tweeted on Thursday that it was not their decision to leave.

Bikor said he is now on paternity leave and was disappointed after Parag, who “wanted to take the team in a different direction”, asked him to leave.

Falk tweeted, “I’ll make it clear that I, too, were fired by (Brague)”. But it appears that Falk later deleted the tweet. His Twitter bio now says he is “unemployed”.

Jay Sullivan, who led the consumption division during Pickpoor’s leave, will become permanent head of the division. He will also oversee the revenue department until a new manager is appointed.