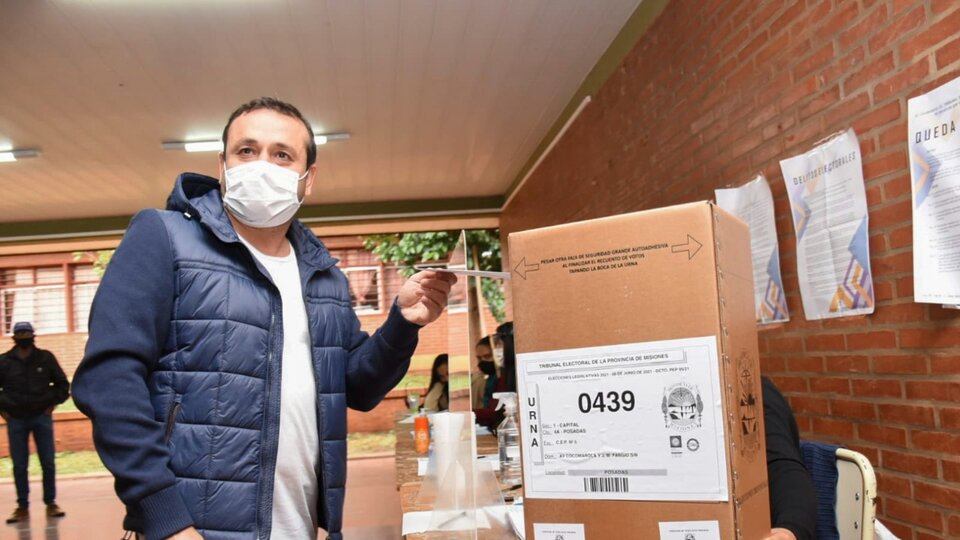 The Front Renovador de la Concordia – a space led by Governor Oscar Herrera Ahuad – prevailed in Misiones with 46.6 percent of the votes, compared to 27.77 percent of Together for Change, in what were the first elections in the framework of the coronavirus pandemic in the country. In third place was the Frente Encuentro Popular Agrario y Social para la Victoria (PAyS) with 14.29 percent of the votes with 98.47 percent of the polls scrutinized. Beyond the fact that the National Congress approved the postponement of the PASO and the general elections for one month each and the recommendation of the National Government that all provinces unify the electoral calendar, Misiones did not do so and this Sunday it was voted the same. The protocols were strict and, according to the province’s Minister of Government, Marcelo Pérez, the event “was a success”, since “all the protocols could be strictly complied with.” In any case, turnout was low: 60 percent of the 947,560 people qualified to do so voted. Participation in 2019 had been more than 78 percent.

In the first electoral test for the government of Alberto Fernández won the Renewing Front of Concord with 48 percent of the votes, which is an ally of the space led by the president of the Chamber of Deputies, Sergio Massa. The first candidate on that list was the provincial deputy Martín Cesino, followed by Sonia Rojas Decut and Mario Vialey. The space that represents Kirchnerism in the province, meanwhile, is the Frente Encuentro Popular Agrario y Social para la Victoria (PAyS) which led Santiago Mansilla, Blanca Álvez and Martín Sancho as the first candidate for deputy, and which obtained a 14, 62 percent. Together for Change came second, with the list headed by radical leader Ariel Pianesi, followed by Micaela González Coria and Germán Kiczka.

In Misiones this Sunday, 20 titular provincial deputies and seven substitutes were elected. The province is also one of the three in which the Law of Slogans is in force –in this case for the councilor category– that is why the Electoral Court approved 247 sublems to elect half of the councilors (three) in 12 municipalities : Puerto Iguazú, El dorado, Leandro N. Alem, San Vicente, Montecarlo, Puerto Rico, Aristóbulo del Valle, El Soberbio, San Pedro and Dos de Mayo.

Given the context of a pandemic, as will happen on September 12 and November 14 at the national level, in this election the number of establishments had to be expanded compared to those of 2019. This allowed avoiding overcrowding as there were fewer tables per school –from 20 tables, a maximum of 7 per establishment – and therefore fewer people. In Misiones this Sunday there were 459 voting centers, that is, 97 more establishments than two years ago. The other novelty was that the voting hours were extended and instead of ending at 6:00 p.m., the voting ended at 7:00 p.m.

“What was different was everything related to biosecurity. The health agents became protagonists who were the people who apostatized in the income of all the schools and ordered people and controlled that all the protocols are fulfilled,” they assured from the court provincial electoral in dialogue with PageI12. In addition, the province decided that only people who are vaccinated could be table authority and that is why it was decided to give priority to the teaching staff, who were inoculated in their entirety.

Each table authority was given six chinstraps so that they could change them throughout the day, there were cleaning kits and thermometers that were used only to take the temperature of the table authorities. On the other hand, although there are not yet all the details, people who had coronavirus and who were therefore unable to attend to vote will have to upload their medical record to an electoral court website in order to justify their absence.

READ  Rafael Nahuel case: they prosecuted the Albatross for ...

The bell, meanwhile, was totally atypical and was done only virtually. There were no acts or any of the typical activities that were carried out in previous campaigns were carried out. “The networks took over the scene, there were many audiovisual products and WhatsApp was used a lot. That also caused false news to multiply and there was a great job from the government that had to come out to deny it,” provincial sources assured.

The health situation in the province

In the last 24 hours, according to data from the provincial Ministry of Health, Misiones had 182 new infections and five deaths. The health situation in the province was controlled because, although it borders Paraguay and Brazil, two countries that are very complicated in terms of the health situation, the border crossings have been closed for more than a year, a measure that reduced the flow of people and contagions. It is the second province with the fewest deaths in Argentina, also a product of the strong vaccination campaign. Health personnel, teaching personnel and all those over 80 years of age have already been inoculated in and this week in the province began to vaccinate those over 40.