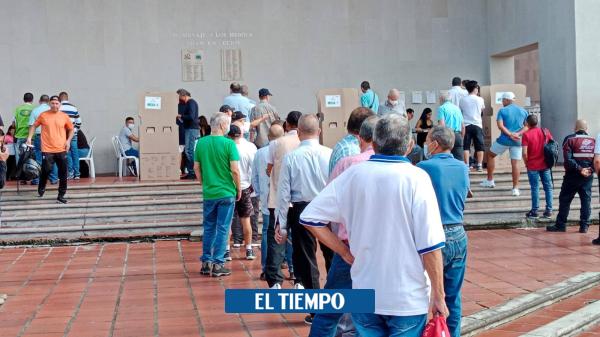 According to the latest bulletin of the General Registry of the Nation, in Cali, the candidate of the Historical Pact, Gustavo Petro, reaches 53.36%, which is equivalent to 527,492 votes.

Closing of the electoral day in the different voting points.

As has become traditional on many of the electoral days, with a few minutes left, many people run in a hurry to reach the vote.

In places such as the El Pueblo Coliseum, the raids of many people to reach the exercise of their rights were evident.

2:00 pm The number of voters decreases in some sectors

The election day in Cali passes normally and calmly.

The number of people seen in the morning decreased in some points in the north and south of the city.​

11:30 am Candidate voted in the north of Cali

The Cali candidate was accompanied by his wife and son.

Meanwhile, at some voting points, some people complain that they have been given pens with little ink, which is why they invite you to bring your own pen.

10:17 am There are congestion on some roads

Some of the city’s roads are beginning to present congestion due to the electoral journey.

In some points close to the voting points, such as the CAM and the El Pueblo Coliseum and on roads such as Sixth Avenue and part of Carrera 1, they present congestion.

So far the day passes normally and without disturbances of public order.

9:31 am Normality on election day in Cali

Election day progresses in complete calm and massive attendance in Cali, where there are 1,787,424 voters at 4,969 tables, at 190 polling stations.

8:16 am Citizens arrive to vote at CAM, in Cali

At the point of the Municipal Administrative Center – CAM, one of the main ones in the city, a large number of people have gathered since the early hours of the morning.

Voting at the CAM, Cali.

Police authorities have nearly 7,000 uniformed officers distributed in different parts of the city and with specialized functions. In addition, the Unified Command Post is available.