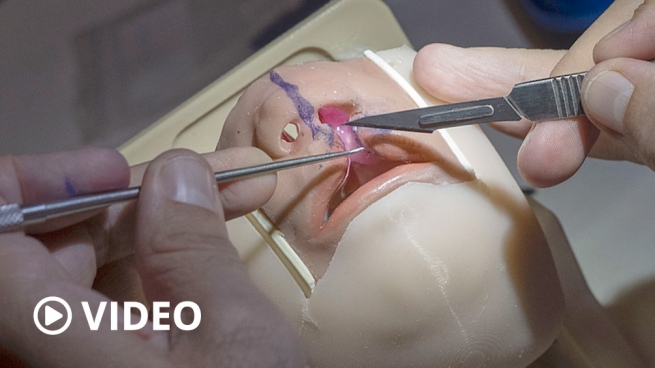 El Garrahan is the first hospital in the country to have a 3D simulator for lip and palate surgery.

And simulator with 3D technology for cleft lip and palate surgery traininga pathology that affects a thousand babies per year in Argentina, was delivered for the first time in the country to the Hospital Garrahan, which will be a pioneer in the use of this tool donated by Smile Train, an international foundation specializing in this disease.

It is a line of simulators that reproduce the human anatomy in a hyper-realistic way and with high fidelity, which allows to speed up the learning time in training surgical reconstruction of cleft lip and palate (FLAP) in pediatric patients, without putting their safety at risk.

During the presentation of the new pedagogical instrument, the head of the plastic surgery and burns service at Hospital Garrahan, Juan Carlos Rodríguezexpressed his pride and assured that it is the “best method to acquire skills and arrive at the operating room better prepared to perform surgery”.

In dialogue with Télam, he explained that “one of the pillars of surgical simulation is patient safety”, since it seeks to perfect the techniques and skills that will later be required to intervene “very sensitive areas”, which put speech at stake, children’s eating, breathing and even hearing in the future.

Is a congenital malformation that can be diagnosed in the first months of pregnancy through an ultrasound study and, with adequate medical treatment from the first days of life, an optimal quality of life can be guaranteed, the specialists agreed.

A globally, a total of 540 babies are born every day with this pathologywhile in Argentina it is estimated that there are around a thousand per yearof which between 250 and 350 are treated at this public health center.

The 3D simulators, which in this first instance are for unilateral clefts although bilateral ones will follow later, were developed and donated by the international organization Smile Train, which for more than two decades has offered free surgeries and multidisciplinary treatments to patients with everyone with this pathology.

The plastic surgeon Fernando Molina, member of the organization’s Global Medical Advisory Councilexpressed that Garrahan thus becomes the “pioneer” in incorporating these pedagogical models, which increase “predictability in congenital malformation surgeries”, of which FLAP is “the most common”, followed by hemifacial microsomia.

The specialist from Mexico explained to Télam that a patient with this pathology requires “ideally two surgeries in his life”: the first, which should be done between three and six months of life, It involves the initial repair of the lip, nasal correction and correction of the most anterior part of the palate.

Meanwhile, the second operation, recommended between 12 and 18 monthsis focused on the reconstruction of the muscles “with which the child is going to speak, ingest, swallow”.

The medical director of the Gantz Foundation of Chile, Carlos Giuglianoassured that “one of the characteristics of this surgery is that it is very difficult to learn”, since it is an intraoral intervention, so the spaces are very small and one must have “a lot of manual dexterity” to achieve functional results and optimal esthetics.

“Teaching this type of malformation is very difficult, the learning curve sometimes lasts up to 10 years to have adequate training,” said Giugliano, adding that these surgical simulators “help a lot” to shorten the learning time and enhance the skills.

Within the framework of this donation, this Friday the first training in surgical simulation of cleft lip and palate was carried out, in which more than 90 residents and young surgeons from Garrahan Hospital and other health centers in La Plata, Corrientes, Tucumán, participated. Cordoba, Misiones and Paraguay.

The director of the Garrahan Foundation, Silvia Kassabassured that the day was part of “training programs with new tools that are innovating in learning and teaching” and stressed that they will be available “in different spaces, including virtual ones, to be able to favor training with a federal perspective.”

Meanwhile, one of the representatives of Smile Train in South America, Dianne Erquiagasaid that the simulators were donated to Garrahan because it is the “most important” pediatric teaching hospital, with “sufficient” academic background to carry out these exercises correctly.

In addition, he indicated that the medical staff of this health center “manage pathologies as they should be, in a multidisciplinary manner”, promoting approaches that include surgeons, dentists, speech therapists, otorhinolaryngologists, geneticists, psychologists and social workers focused on this pathology.

Finally, Erquiaga emphasized in the importance of families, especially the most vulnerable, being able to access information on treatment for the pathology and the different possibilities of free access to surgeries.