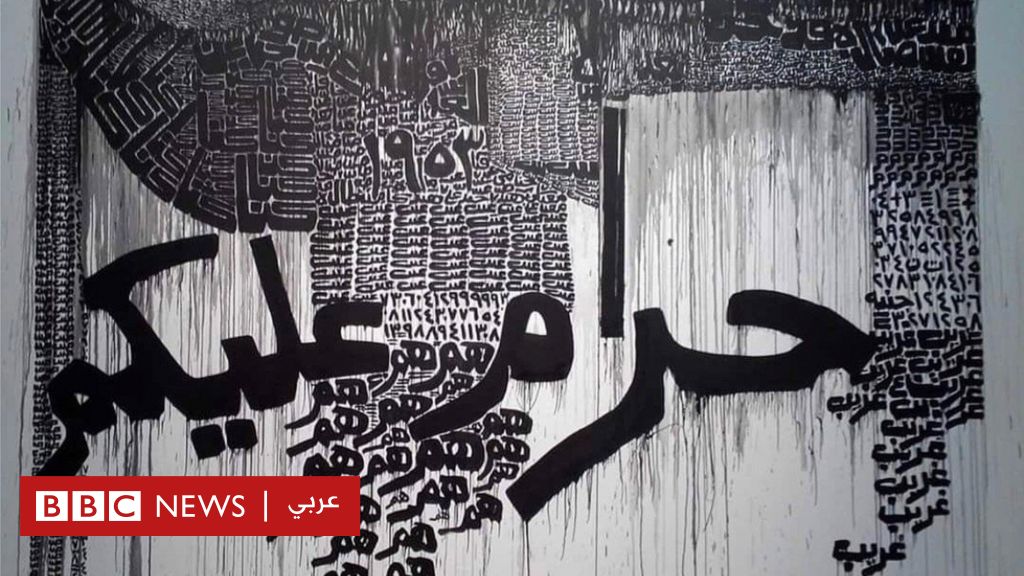 Egyptian artist Fathi Hassan .. “An African fell from the sky”

“Taming the Soul” is the title of an exhibition currently being held in one of the halls specialized in African art in London by the Egyptian artist, Fathi Hassan, who is described today as one of the most important African artists residing in the West.

Hassan left his country of Egypt more than 45 years ago, carrying a creative repertoire in which he made works that evoked his Nubian origins.

Perhaps the first thing that catches the eye in his works is those aesthetic formations with their dark colors, then floating shapes and symbols.

His paintings are loaded with words that seem consistent, but upon checking them, we find mysterious incantations.

Fathi Hassan says that he considers the letter as “a secret word that is at its most powerful when it does not result in an intelligible text.” He wants the contemplator in his paintings to arrange the letters as he sees, to make his own words from them. The letter ‘is not easy’, as he puts it, ‘even if I make up a word, I don’t put it in a sentence.’

The irony is that when he departed from that rule, his written words provoked sharp reactions inside and outside the circles of fine art.

In 2012, his exhibition, which he held in Beirut, bears the slogan “Arabism and Arabization,” which angered the curators, claiming that it was loaded with political connotations or might allude to specific regimes. It was only that he painted a mural on the building bearing the same phrase!

See also  Gemini has no doubts, but Scorpio is getting richer / Amur.info - News agency of the Far East

Prior to that, in 2010, he had shown in the “Rose Issa” hall, known at the time in London, a group bearing the slogan “Forbidden for you”, and it was a “cry of resentment” about the situation in the Arab region after years of “injustice and tyranny”, according to him.

The legacy of the Nubian experience

The loss of meaning in the written word leads us directly to Fathi Hassan’s Nubian origins, as the Nubian language remains today mainly spoken after its written form disappeared centuries ago.

In addition to his personal memories in the land of his ancestors, Fathi Hassan evokes in his works the collective experience of the Nuba people, who were forced during the last century to abandon a large part of their lands permanently after the Nile was flooded by the construction of successive dams from 1902 to 1970.

Fathi Hassan says that he felt since his childhood the extent of the sadness that was within those who migrated from their lands, and that many of them were unable to adapt to the changes that occurred in their lives.

When Fathi Hassan left Egypt in the mid-1970s to study art in Italy, he realized that what distinguishes him from those around him in the West is his saturation with that African creative heritage.

‘An African fell from the sky’

His thoughts about his experiences and the complex identity that formed between Egypt and Italy over the years, he summarized them in the form of short poetic stories published in 2014 under the title “An African Fell From Heaven”.

In 1988 he was the first artist to represent the African continent at the Venice Biennale, one of the most prestigious art institutions in the world. Since then he has been referred to as an African artist par excellence and was invited in 2005 to complete works for the National Museum of African Art in Washington, United States, and the British Museum and the Victoria and Albert Museum in London acquired some of his work.

Hassan asserts that his presence in the West gave him a space to form his identity and a freedom to express himself that he would not have found in any other part of the world.

The painting ‘The Dominating Genie’, currently on display in London, represents a mighty creature that slowly creeps over the scene, leaving behind its prospective offspring who will complete his destructive path after him.

Hassan said he deliberately didn’t show the genie’s head in the painting to indicate the multiple identities he could take. ‘He may represent a country, a tyrannical ruler, a major company, or perhaps he is inside us!’

This analysis reflects what is going on in the mind of Fathi Hassan. But he also says that once he finishes completing his paintings, he places them in the viewer’s eye so that he can breathe new life into them from his imagination.