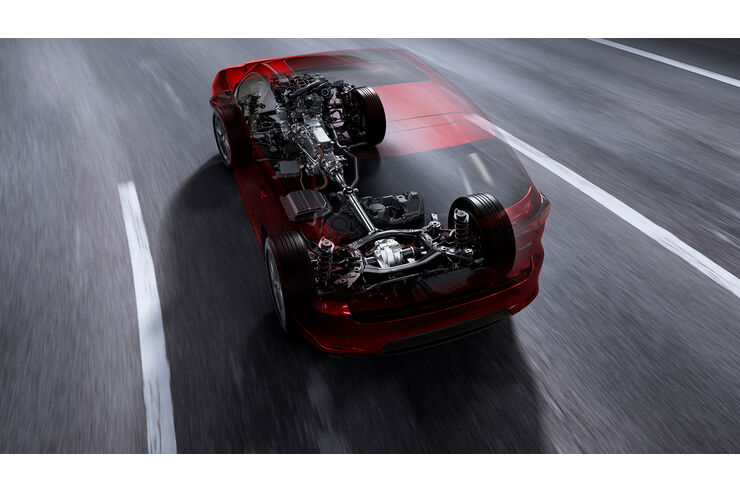 With the e-Skyactiv D six-cylinder Mazda presents a completely newly developed diesel engine. We have looked at the diesel in detail.

Mazda has a certain tradition of going off the beaten track when it comes to drive technology, see Wankel engine. And now there is another move against the mainstream: A completely newly developed diesel engine for passenger cars, the e-Skyactiv D. While other manufacturers are retiring the diesel developers to make room for the electric future, this is definitely a statements. Mazda is taking the step towards compression-ignition in the belief that this drive is more efficient and cleaner than ever. Let’s take a look at that in detail.

First the sober technical data of the e-Skyactiv D six-cylinder, which already has a few special features. For example, the displacement of 3.3 liters, it is exactly 3,283 cm33, generated from a bore/stroke ratio of 86.0 x 94.2 mm. In fact, the unit of measurement of 0.5 liters displacement per cylinder has established itself as a quasi-standard in the industry, on the one hand for reasons of the identical parts strategy and on the other hand for thermodynamic reasons. Half a liter is generally regarded as the optimum ratio of cylinder volume to cylinder surface.

However, Mazda emphasizes that the new e-Skyactiv D achieves top values ​​for thermal efficiency in particular, with “over 40 percent” being mentioned. This is quite a respectable value for a fast-running diesel car. This efficiency shows how much of the combustion energy is converted into work, the “rest” is waste heat. Standard diesel engines typically achieve around 35 percent thermal efficiency. The improvement is primarily due to the new combustion process, which Mazda calls DCPCI (Distribution-Controlled Partially Premixed Compression Ignition).

With two combustion chambers in the piston, the mixture spreads more efficiently and ignites later.

Translated as “distribution-controlled partially premixed compression ignition”, this means in plain language that with two injection processes per power stroke and a specially shaped piston, the ignition point of the mixture is delayed compared to a standard diesel engine. This leads to the formation of a lean fuel-air mixture, which pays off in terms of efficiency and emissions. The specially shaped piston has two egg-shaped bulges towards the edges, which is well illustrated in the video above. Due to these two separate combustion chambers, the mixture is distributed more evenly and ignites later than with a standard piston with only one combustion chamber. The common rail injection works with an injection pressure of up to 2,500 bar.

As a reason for the relatively large displacement, Mazda cites advantages in the intake volume, which means that the exhaust gas recirculation of the turbo diesel engine can work more effectively. This is one of the reasons why the new Mazda e-Skyactiv D engine should also be fit for the future when it comes to exhaust gas cleaning and also the announced Euro 7 emissions standard.

Another special feature of the new six-cylinder is its comparatively modest liter output of 61 to 78 hp/liter, depending on the version. Mazda refrains from “inflating” the diesel with complex charger technology, for example like BMW, and relies on performance support elsewhere. A disc-shaped, permanently excited syncron electric motor is installed between the eight-speed automatic transmission and the motor drive shaft, which brings it to a maximum output of 12.4 kW/17 hp and a torque of 153 Newton meters, which is the “e” in the motor designation of the e-Skyactiv D. A lithium-ion battery with a capacity of 0.33 kWh serves as a backup battery.

Mazda will initially offer the e-Skyactiv D motor in the CX-60 SUV. Two performance variants are provided here. The rear-wheel drive model gets the diesel engine with 147 kW/200 hp and 450 Nm of torque. In the variant with all-wheel drive, the output increases to 187 kW/254 hp and the torque to 550 Nm. The SUV, which weighs around two tons, accelerates from zero to 100 km/h in 8.4 (rear-wheel drive) or 7.4 seconds. There are also decent values ​​for the approved trailer load, which is 2.5 tons for all versions.

However, it will be particularly exciting to see whether Mazda’s new diesel can deliver the promised consumption values ​​in practice. Because these read quite impressively even for an economical diesel with mild hybrid technology. According to the WLTP cycle, the 2WD version with 200 hp consumes just 4.9 liters per 100 kilometers, while the all-wheel drive version with 254 hp has an average consumption of 5.1 liters. For comparison: The similarly positioned BMW X3 as a 286 hp xDrive30d is specified with a combined WLTP consumption of 6.2 to 7.0 liters.

Yes, you can see that diesel engines still have potential.

No, the diesel issue is slowly exhausted.

Mazda has invested in the development of an all-new diesel engine, making its debut in the CX-60 SUV. A special injection process and specially shaped pistons are designed to make the straight-six extremely economical and clean. That sounds like an interesting alternative to electric cars, especially for long-distance journeys. After all, the range should be around 1,000 kilometers per five minutes of refueling, despite the comparatively small 58-liter tank.