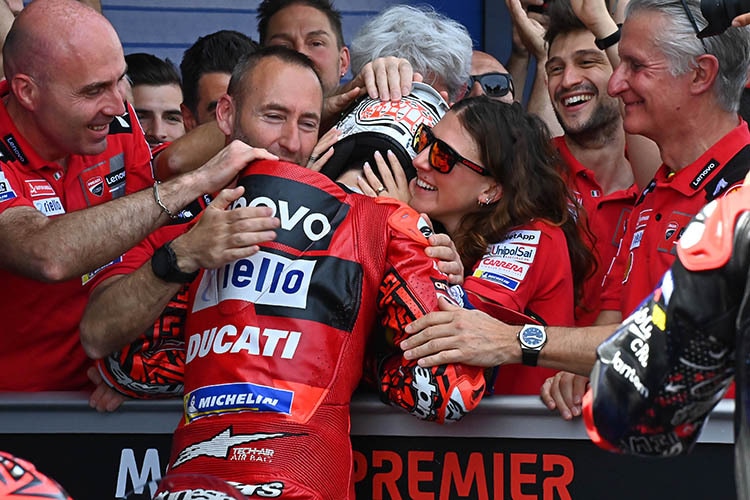 Nine days after the Jerez GP, the English website motorsportmagazine.com spoke of a “bomb burst”. It was reported that Ducati factory rider Pecco Bagnaia ran illegally under-inflated tires for 25 of the 25 laps of his win at Jerez. In short, Ducati won by cheating. In addition, it was revealed: The permitted tire pressure was also fallen below in the case of the Pramac Ducati works driver Jorge Martin, who fell in the first lap and remained without points – during 24 of the 25 laps of the race.

As a reminder: Since the 2016 Mugello GP, the MotoGP World Championship has required sensors on the rear and front wheels to monitor tire pressure. One reason for this: During the Sepang test in February 2016, the rear tire of Loris Baz on the Avintia-Ducati burst at a speed of 330 km/h on the home stretch. Michelin, who had been the supplier of the standard tires for the first year, blamed insufficient tire pressure.

Since then, the minimum tire pressure has been 1.9 bar for front wheel slicks and 1.7 bar for rear wheel slicks. In Moto2, 1.5 bar is allowed at the rear.

But there is an agreement among the six members of the MSMA manufacturer alliance that minor offenses will not be punished.

Ing. Sebastian Risse from KTM Factory Racing: «This is a difficult topic. Unfortunately, the current sensors are not very reliable and the signals are so easy to fake that in the end no manufacturer would accept penalties from such a sensor value. »

For this reason, the six MotoGP manufacturers have come to a gentlemen’s agreement not to punish misconduct. And Michelin doesn’t usually give out the results at all.

In the past it was different, at least in the Moto2 World Championship and at Dunlop: in 2018 Fabio Quartartaro from Luca Boscoscuro’s speed-up team was stripped of his GP victory in Motegi/Japan because the Frenchman’s rear tire had 0 .05 bar was measured too little and the pressure fell below 1.5 bar.

Gigi Dall Igna, General Manager of Ducati Corse and winner of the Constructors’ World Championship with Ducati for the last two years, who has been accused of fraud, defends himself against the allegations from England with plausible arguments.

This year, Ducati finally wants to win the second drivers’ world championship since Casey Stoner in 2007 with its Desmosedici stars such as Bagnaia, Miller, Bastianini, Martin and Zarco.

The genius Dall’Igna told a small group of top journalists this afternoon that the goal is to collect and monitor the data this season in order to be able to formulate an applicable tire pressure monitoring rule for 2023.

“There is not much to explain on this subject,” said the Ducati racing boss. “We are looking for a reliable system that we can use to measure tire pressure. The problem with the current rule is that the pressure depends on whether you’re slipstreaming or not. The MSMA is therefore still discussing how many laps you have to stay above the minimum value prescribed by Michelin for safety reasons and which laps should be used. »

“It’s also a very important security issue. While it is relatively easy for the rear tire to move within the values ​​that Michelin tells us, it is extremely complicated for the front tire. The tire pressure, which depends on the temperature, depends very much on whether you are driving in the slipstream or not. When one expects to slipstream a race, they tune the system in a certain way. On the other hand, if one thinks that he will drive alone in the race, he adjusts the parameters in a different way. But if the opposite then happens, the values ​​are too high. For example, if someone adjusts tire pressure for a race alone but ends up behind an opponent, they risk over-inflation and a fall. Because from a certain value the grip decreases and it becomes dangerous.”

“At the moment, the system that all teams and plants use is not reliable,” emphasizes Gigi Dall’Igna. “That means we use different sensors. The system is not fraud-proof. If someone wants, they can trick the system and modify or manipulate the value of the tire pressure. That’s why you can’t impose sanctions or penalties if the tire pressure is not reached.”

Dall’Igna said the MSMA is looking for a bulletproof surveillance system for 2023 that cannot be tampered with. Then the plants and teams will also agree to sanctions as soon as the minimum tire pressure prescribed by Michelin is not reached.

“It must also be said that the data that is currently being collected does not take into account the possible errors that any measuring system can have. Values ​​that appear to be below the minimum might not be either. It’s like speed control in road traffic, where you don’t use the value that the speed camera measures, but a corrected one.”

Have there been other MotoGP race winners this season that have not met the minimum tire pressures either? “Yes,” Dall’Igna replied. Also from other brands? “Yes,” assured the Ducati strategist.

In Jerez, Alex Rins is also said to have driven with under-inflated tires. Andrea Dovizioso, also a Suzuki and Yamaha driver, was named as the fourth offender. The tire pressure measured on the front tire was too low for both of them, they ended up in 19th and 17th place. They could have fallen below the limit at the front due to their slow driving style…

“At Ducati, we strive to comply with Michelin regulations at all Grands Prix,” said Gigi Dall’Igna.

Championship status after 6 of 21 Grand Prix: