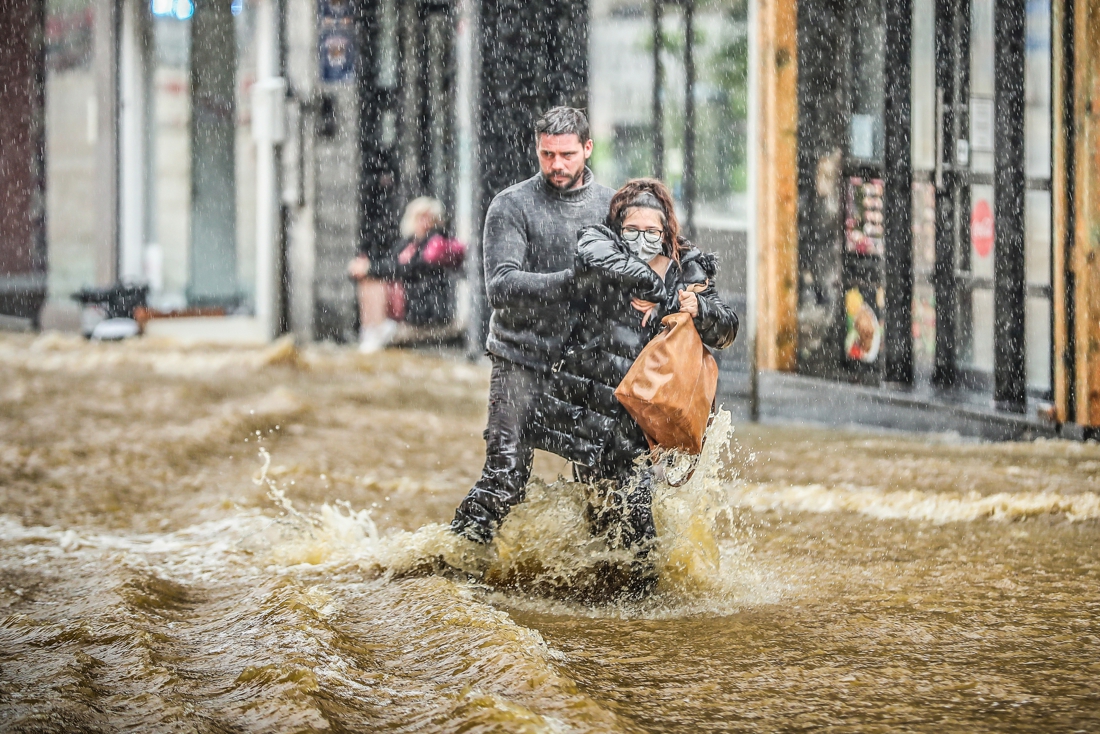 The flooding in the south of the country is great. A man in his twenties died in Eupen. On Thursday morning, Rendeux is still looking for a 15-year-old girl who was dragged along by the Ourthe. And in the Liège municipality of Aywaille, a person drowned in his cellar, the mayor reports. The city of Liège fears that the Meuse may burst its banks this afternoon.

The announced rainy weather has caused nuisance in many places in the south of the country. In the provinces of Luxembourg, Liège and Namur, the contingency plan was announced during the day after several waterways overflowed the banks.

In Eupen, in the East Cantons, the heavy rainfall on Wednesday cost the life of a 22-year-old man. That report the newspaper Border echo based on the authorities. The twenty-something is said to have jumped with a swimming ring into the fast flowing water in the Nispert district. The young man was missing for a while. Later, emergency services found his body in a stream near the Rotenberg.

In Marcourt in the province of Luxembourg, a 15-year-old girl is said to have fallen into the Ourthe. She has been searched for all night with divers and drones, but she has not yet been found, police say.

In Aywaille, in the province of Liège, emergency services have found the lifeless body of a 50-year-old man in the basement of his house. That reports mayor, Thierry Carpentier.

Some houses were also evacuated as a precaution in some streets in Eupen, Limbourg and Baelen, among others. The situation in the municipality of Trooz is worrying. The river Vesder has overflowed its banks. “It’s catastrophic,” said Mayor of Trooz Fabien Beltran. “We don’t have enough men, so we have called in the help of the army.”

Voeren also evacuated 140 homes last night. The mayor confirms this on Radio 1. According to the mayor, some of the residents were evacuated as a precaution. “But some of the homes were under water for 14 hours,” it sounds. The fire brigade evacuated the people with boats.

Given the emergency situation, the acting governor of the province of Liège, Catherine Delcourt, asks the population to avoid unnecessary travel.

Many streets in the north of the province of Luxembourg were flooded on Wednesday as a result of the heavy rainfall. Many youth camps were also evacuated or are no longer allowed to take place.

The RMI announced the code red for the province until tonight Liège, that’s very exceptional. After midnight, code orange applies until Thursday morning. Code red means that there is already a lot of flooding in the province and that a lot of precipitation is expected. The problems will either get worse, or extreme precipitation is expected in a shorter time. Residents are asked to “take action to keep yourself, others and if possible your belongings to safety and strictly follow the advice of the appropriate authority.” In the provinces Names on Luxembourg is currently code orange in effect.

In Flanders, code orange only applies to the province Limburg; the other provinces turn yellow and green on the weather map. Only the coast, West Flanders and East Flanders are spared.

Rail traffic is also experiencing disruption: rail traffic in the south of the country will be shut down on Thursday morning.

There are various reports of flooding and flooding on the NMBS website. The railway company NMBS advises customers for the provinces of Liège, Namur and Luxembourg to postpone their train journey if possible.

The emergency number 1722 was activated on Monday and will remain active until at least Friday. For storm and water damage for which you need assistance from the fire brigade, you can submit a request via the e-desk www.1722.be or call 1722. Only call 112 for potentially life-threatening situations.

⚠️Due to bad weather conditions, there are serious disruptions to train traffic, especially in the east of the country. For the provinces of Liège, Namur and Luxembourg, we advise customers to postpone their train journey if possible. More info at https://t.co/uAfmlZtUl7 #NMBS